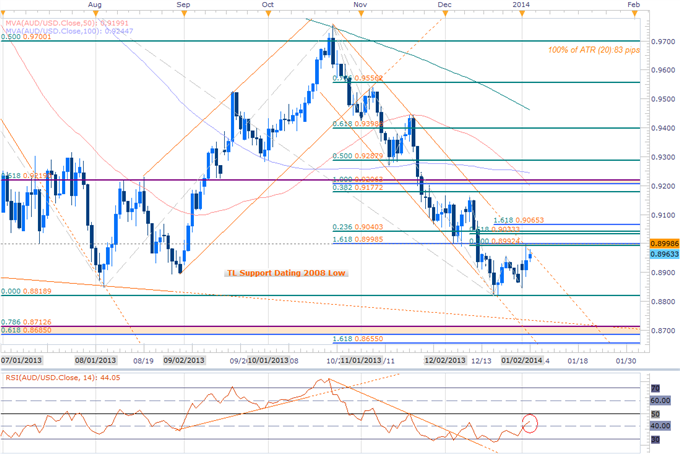 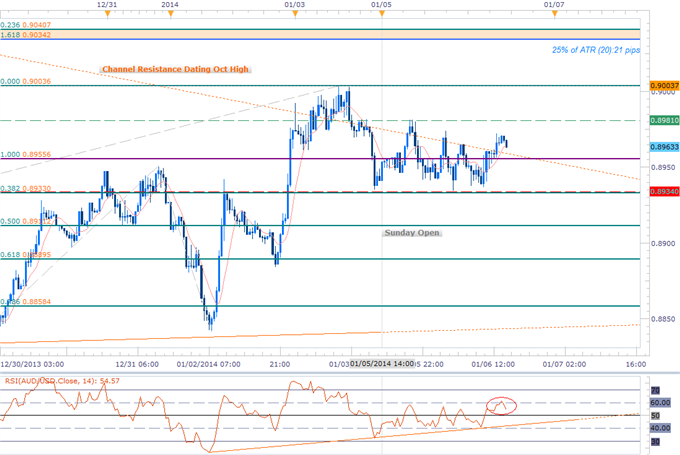 Notes: The daily chart shows the Aussie coming into key near-term resistance at the confluence of the 50% retracement from the decline off the December high & channel resistance. The decline off the October high looks to have completed 5-waves with the advance off the December low now threatening the initial December opening range low. A breach above the 9000-figure keeps our focus on subsequent topside objectives at 9033/40 & 9065 with a breach/close above channel resistance suggesting that the correction off last month’s lows remains in focus.

The weekly opening range is rather clean here and as such, we’ll wait for a decisive break to offer further conviction on whether or not to maintain our bullish scalp bias. The 9000 region represents a key near-term inflection point and we’ll look for the range break for guidance. A concerted break below 8933/34 puts a bearish tone our setup against 8981 and a pending RSI trigger should offer some guidance. Keep in mind the broader bias remains weighted to the downside and things can fall apart pretty quick here if there’s a wash-out.

Bottom-line: we’re trying to gauge how deep this correction will be and we are now heading into the first major barrier of resistance. Note that the weekly, monthly & yearly opening ranges are just being put in and price action over the next 48-72 hours should offer further clarity on our near-term directional bias. We’ll continue to follow this setup closely in DailyFX on Demand.