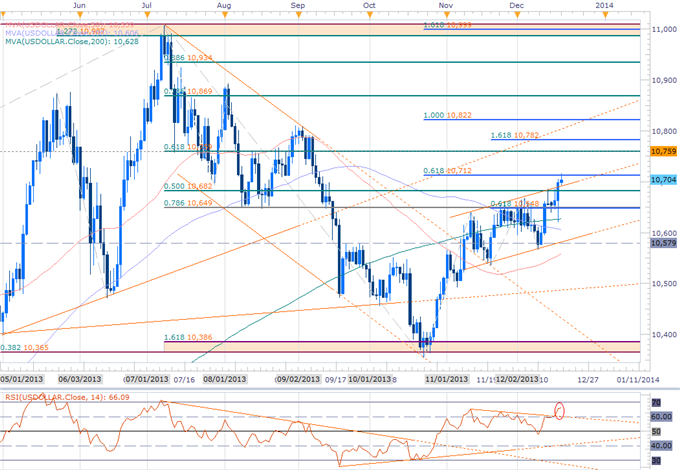 Notes: The greenback looks to be on firm footing with this week’s FOMC decision to taper QE operations largely supportive for the dollar as we head into 2014 trade. The advance has now completed a 61.8% extension off the October low and the near-term outlook remains weighted to the topside above 10, 648/50 with only a break below the December close-low at 10,577 risking a more substantial correction. Look to buy on the dips with a breach/close above 10,712 targeting subsequent topside objectives. 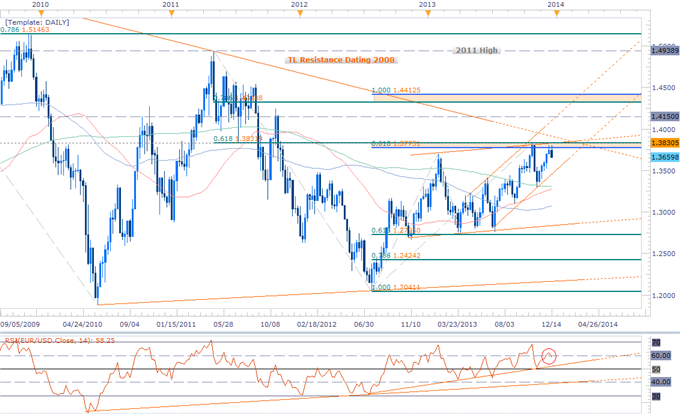 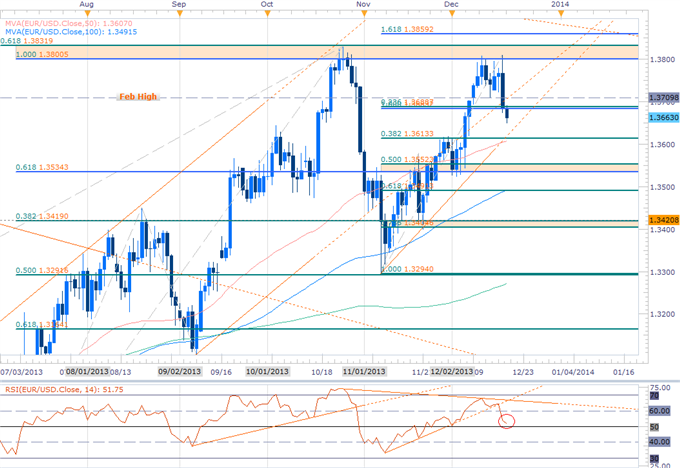 Notes: The weekly chart shows the euro coming into significant longer-term Fibonacci resistance and as such, we shift our focus to the short side below 1.38-1.3830 with a key outside day reversal & RSI trigger break yesterday warranting short exposure. We look to sell rallies / breaks off support while below this threshold with a move sub 1.3534 offering further conviction on shorts into subsequent support targets. The 2014 opening range should be very telling here with divergences in the central bank policy outlooks between the ECB and the Fed alone likely to keep the broader outlook weighted to the downside heading into next year. 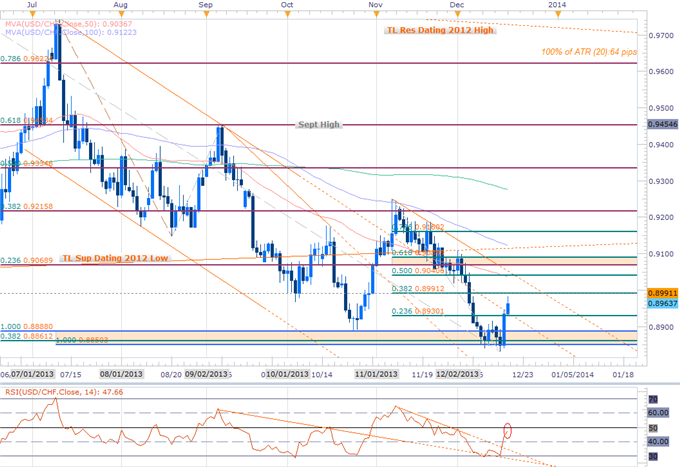 Notes: A trade we’ve been following extremely closely in DailyFX on Demand, the USDCHF has started to exhibit some indications that a near-term base may be building and longs were initiated on back of the FOMC announcement. While this would coincide nicely with our outlook on EURUSD, it’s important to stay prudent after we got shaken out of the long-side in early November. Note that a breach above 9020 would be required to put us back above the 2013 opening range low and we’ll look for the 2014 opening range to offer further evidence for our building topside bias on this pair.

Bottom line: Looking to buy dips into key resistance at 9068/90 with a breach above this threshold targeting subsequent topside objectives. A break below key support at 8850 invalidates this setup with such a scenario risking further declines into support targets sub-8600. 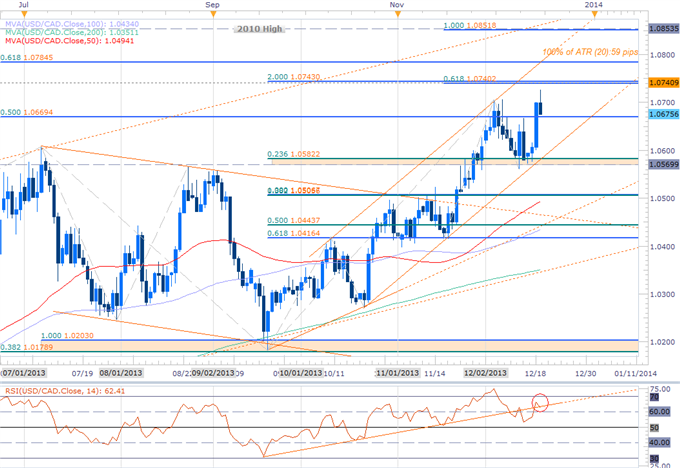 Notes: A slower-burning trade, the USDCAD has continued to impress with its clean technical advance off the September low. The pair has continued to trade within the confines of a broad ascending channel formation dating back to the 2012 low after breaking above a multi-year consolidation period dating back to the 2011 lows this year. It’s important to note that he USDCAD remains at the low end of the pair’s historical mean and a breach above 1.0889 next year could open up vast topside targets as we maintain an upside bias heading into 2014.

Look for the near-term embedded channel to offer guidance as we close out December trade with daily RSI divergence suggesting the pair remains art risk for a near-term correction. Bottom line, look to buy dips with a break below the confluence of the monthly low, channel support and the 23.6% retracement at 1.0570/82 risking a more meaningful correction lower. Only a close below 1.0440 would be a threat to our longer-term directional bias. 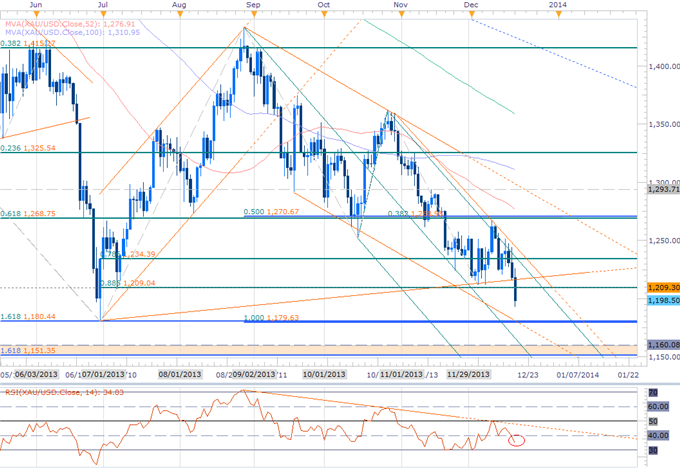 Notes: Our broader bearish outlook noted in the quarterly projections have achieved all three targets and while we may see a correction in late December / early January, the outlook remains heavy from both a technical and fundamental standpoint. With inflation expectations well anchored in the medium-term, the greatest risk to our bearish call is a more substantial decline in broader risk assets (an unlikely scenario in the near-tem IMO).

Key support rests at the yearly low which was represented by a Fibonacci confluence at $1179/80. Channel support also comes into focus in this region and may offer some support for prices in the near-term. A break below this mark offers further conviction on short exposure into subsequent support targets. Should the topside of the channel be compromised, look for a more meaningful recovery to offer more favorable short entries with only a breach above $1268/70 invalidating our broader outlook.