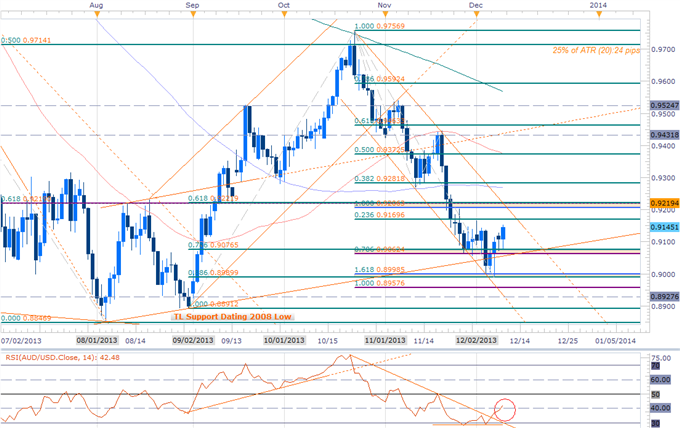 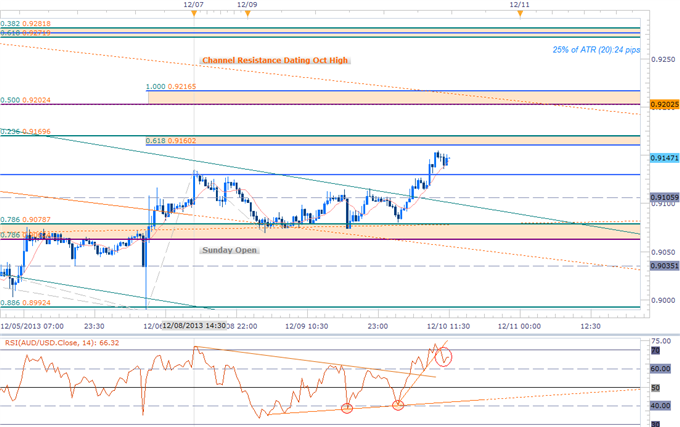 Notes: The weekly opening range looks to have broken to the topside with the rebound off key technical support last week supporting our near-term corrective approach on the aussie. Longs were initiated earlier today as discussed in DailyFX on Demand with our initial target eyed at 9160/69. This region represents the 23.6% retracement of the decline off the October high, the monthly opening range high and the 61.8% near-term Fibonacci extension of the advance off last week’s low.

The setup has been clean with intra-day momentum continuing to respect the 40-threshold, keeping our focus higher. Look to buy dips / breaks of resistance while above 9060/78 with long conviction added with a breach/close above 9160/69. We’ll scale out of long exposure as we head into the 9200/20 range where short entries are favored. Only a breach above 9280 invalidates our broader bias with such a scenario risking a more meaningful recovery into subsequent resistance targets.

Note that a break below the weekly range low invalidates our near-term scalp bias and puts the broader decline off the October high back into focus. Short conviction is added with a break below key support at 8990-9000 with subsequent support targets seen at 8958, 8927 and 8890. Keep an eye out for the Australian employment report out tomorrow evening in New York where consensus estimates are calling for a print of 10K jobs for the month of November while the unemployment rate is expected to tick up to 5.8% from 5.7%. Broader USD price action might also be impacted by the US Retail Sales report the following morning and could alleviate some of the recent pressure on the greenback.