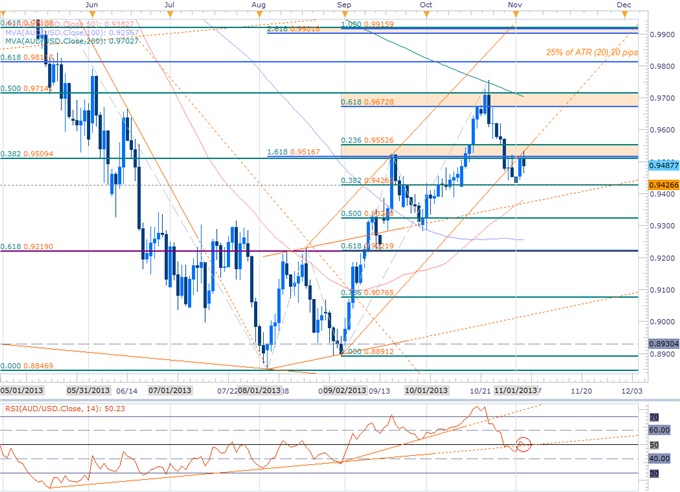 Notes: The AUDUSD broke below channel support late last month before rebounding off the 38.2% retracement taken from the advance off the late-August lows at 9426. Note that the rally off this mark was halted today at former channel support, currently around 9535. The broader ascent off the yearly lows looks to have completed a 5-wave advance and as such, we look for a near-term correction lower after reversing off key resistance at 9673- 9714.

Although the initial weekly opening range looks constructive, it’s important to remain prudent as we head into key event risk this week with Australian trade balance and employment data on tap ahead of US GDP and Non-Farm Payrolls. The November opening range is now in focus with price action into the close of the week likely to offer further conviction on a medium-term directional bias. That said, we will look to sell rallies / breaks of support with only a breach above 9570 invalidating our near-term scalp bias. A move sub 9426 warrants short exposure into subsequent support targets with traders advised to reduce exposure as we head into key US event risk later in the week.