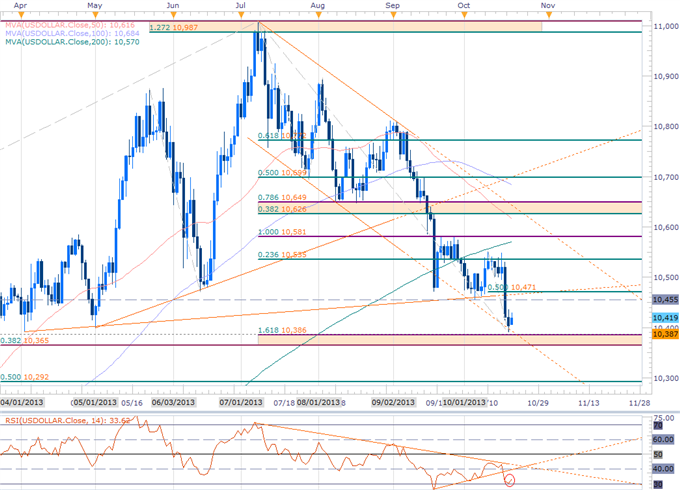 USD at Support Ahead of NFPs- GBP, AUD & Gold Scalp Biases in Focus

Notes: It’s ALL about NFPs tomorrow with the index sitting on a cluster of near-term support targets including operative channel support, the 1.618% Fibonacci extension off the yearly high and the 38.2% retracement from the 2011 low. Although the preliminary opening range has kept the near-term bias on the short-side, we will respect this key support heading into tomorrow’s data print with the risk of a downside break rising on a weak employment report. Only a breach back above 10,470 alleviates further downside pressure with such a scenario eyeing resistance targets at 10,535, 10,581 and channel resistance. 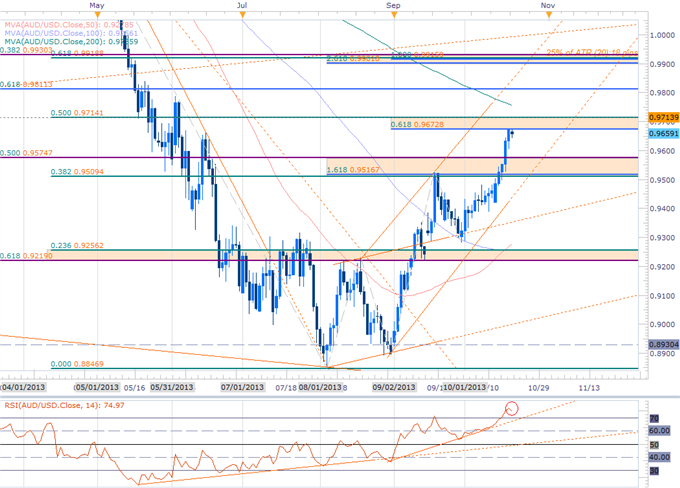 Notes: We noted on October 8th that, “The October opening range hasn’t been all that helpful (may still be in the process) as we continue to press higher in aussie. Initial topside objectives are eyed at 9510/16 and 9575 with a breach here offering further conviction on longs into subsequent resistance targets. Overall the advance off the August lows remains constructive.” There have been no major shifts to the bias and indeed the pair has continued to charge through each resistance target before completing a 61.8% extension off the late August advance.

Note the pair has now also completed what seems to be a 5-wave advance and although it is in overbought territory, the oscillator can reflect this for an indefinite time period with more evidence needed before we can attempt to ‘call the turn.’ Initial momentum short triggers will be initiated with the break back below 70, with multiple trendline support triggers also pending. As we head into NFPs we will stray away from USD crosses with an opportunity to trade the Aussie still in play against the Loonie as noted in last week’s AUDCAD report. The short-side bias is in play only below 9920-40 threshold 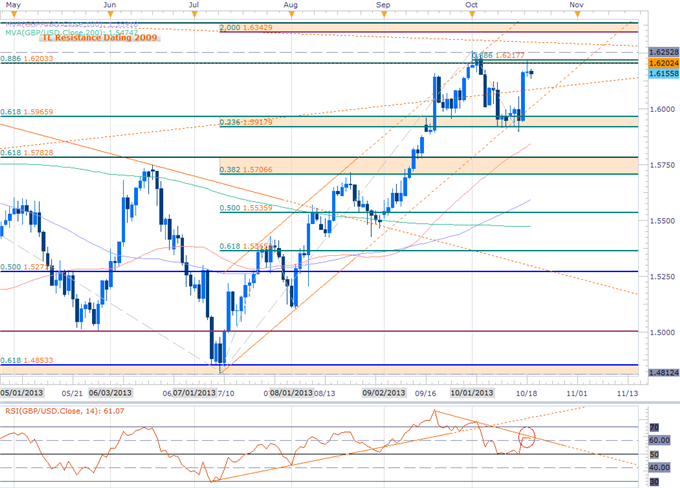 Notes: The reversal off key support last week invalidated the short scalp-bias noted at the start of the month. However, it’s important to note that the pair has continued to respect the October highs and as such, we cannot maintain a bullish scalp-bias at these levels. With RSI heading into resistance, NFPs on tap and key UK economic data later this week, we will remain neutral-to-bearish on the pound below the opening rang high, with a breach opening up objectives at subsequent resistance targets. 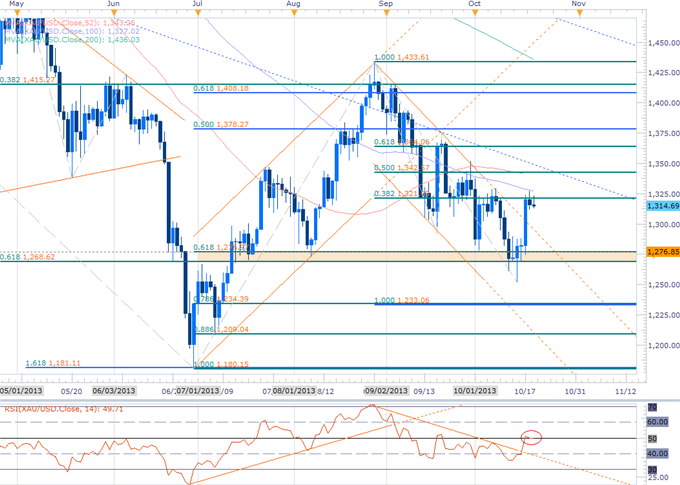 Notes: We noted earlier in the month that a, “Few things are concerning me in the near-term on gold that could interrupt our bearish outlook. 1- Daily RSI has been unable to hold below the 40-threshold (which often suggests that the near-term pullback remains corrective within a larger up- trend) 2- The sharp rebound seen early this month came off significant technical barriers and completes key Fibonacci ratios off the August highs.” While the rally off key support here again looks convincing, as in the pound, we will wait for a breach of the October highs to validate the channel break seen last Thursday.

Trade these setups and more alongside DailyFX with Analyst on Demand