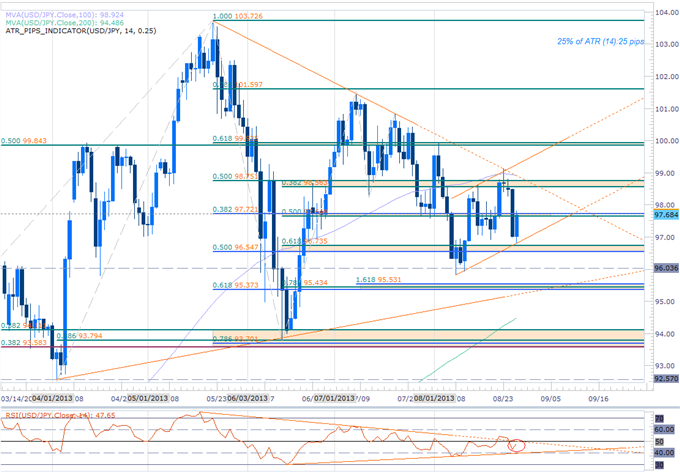 Last week’s report highlighted setups in the EURUSD, GBPUSD, USDCHF and the USDOLLAR with the all but the Swissie playing out as planned. (Swissie continues to hold key technical support). As we close out August trade our focus now shifts to the September opening ranges to offer further clarity on our near-term directional biases. Note that event risk picks up next week with 2Q GDP and NFPs and could serve as a catalyst for our current setups. Here are the updated setups on the USDJPY, Gold and the USDOLLAR index.

Notes: The broader uptrend remains in focus above 95.37 as the pair continues to consolidate. Near-term topside break above 97.72 puts subsequent resistance targets in focus with a move (and close) above 98.75 targeting key resistance at 99.84/92. Long exposure is warranted if this level is surpassed. Daily RSI break below the 40-threshold with price action below 95.37 suggests a deeper correction is at play. 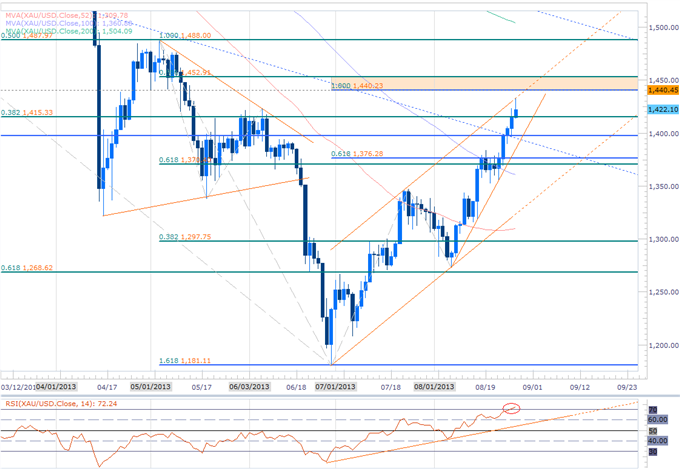 Notes: Gold has held within the confines of a well-defined ascending channel formation dating back to the June lows. The RSI signature was a true tell this month as we noted in the August 16th weekly forecast, “With the oscillator breaking above the 60-threshold for the first time since August 2012 and price action surpassing the previous monthly high for the first time since October 2012- both constructive developments for gold.” The yellow metal now eyes a key resistance range and while we favor the downside it’s important to note that a breach above would suggest a more significant uptrend may be in the making. A near-term support break below 1370/76 with RSI conviction puts subsequent downside targets back in focus. 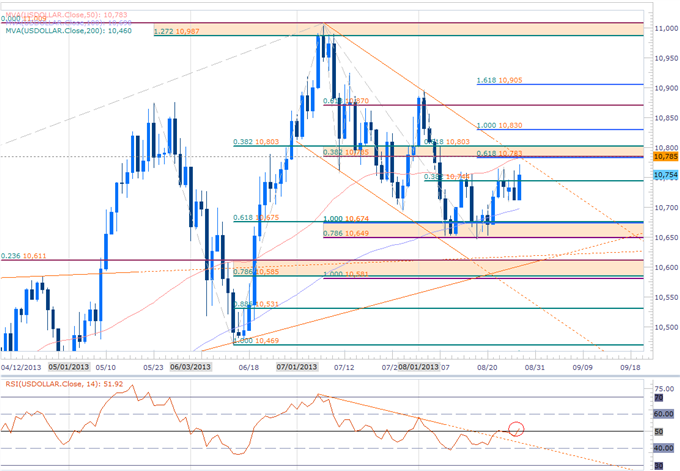 Notes: Near-term price action looks constructive but we remain cautious as we head into the close of August trade with NFPs on tap next week and the September opening range in focus. Note that daily RSI held the 40-threshold throughout the decline off the July highs suggesting that the move remains corrective in nature. Look for a breach above the monthly open at 10,802 to offer further conviction on long-side exposure.

Trade these setups and more alongside DailyFX with Analyst on Demand