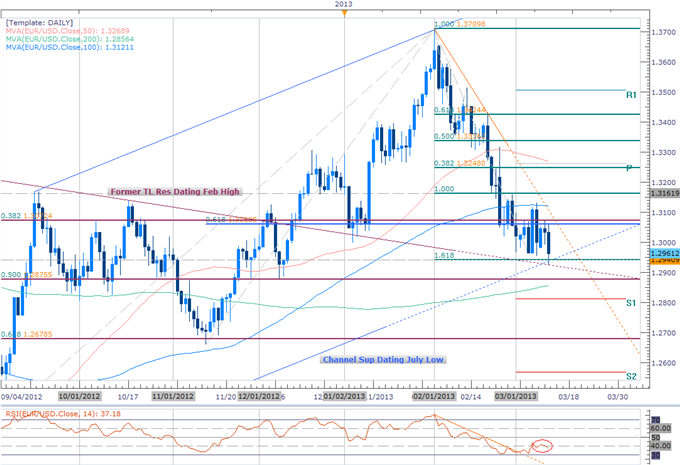 The EURUSD has now come into key support at the near three-way confluence of the former trendline resistance dating back to the February 2012 high, current operative channel support dating back to the July low and the 1.618% Fibonacci extension taken from the February highs around 1.2940. This level remains paramount for the euro and the risk for a near-term correction has us looking higher in the interim noting critical resistance in the range between 1.3060-1.3070 which represents the 61.8% retracement from the November lows and the 38.2% retracement from the July advance. A breach above this mark would suggest a more substantial correction with such a scenario eyeing subsequent topside targets at the 100% extension at 1.3160 and the 38.2% retracement from the February high at 1.3248. 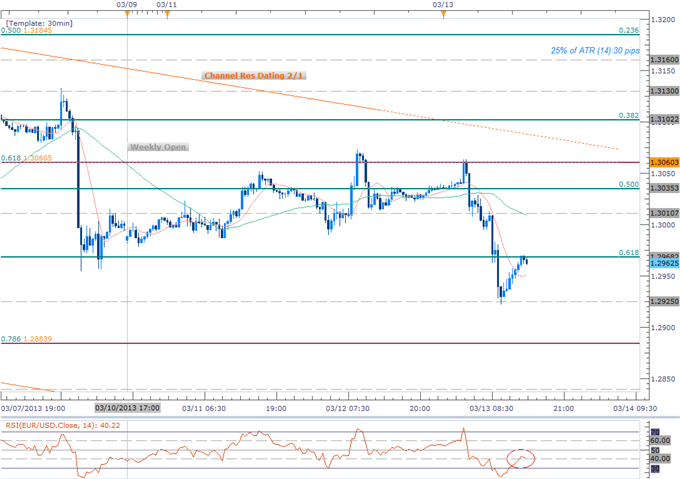 The 30min scalp chart shows the EURUSD continuing to hold within the confines of a well-defined descending channel formation dating back to the February highs with the pair currently holding just below interim resistance at 1.2970. In the near-term, the RSI signature does suggest a bearish bias but we will remain on the sidelines on the shorts pending a daily close sub 1.2925 (today’s lows and well below the key 1.2940 threshold noted on the daily). Should momentum start to gather pace, look for a breach above 1.2970 to put our topside targets in view. A quarter of the daily ATR yields profit targets of 26-29 pips per scalp depending on entry. Should ATRto pullback dramatically, adjust profit targets as need to ensure more feasible scalps.

*We will remain flexible with our bias with a break below 1.2925 eyeing subsequent support targets. It’s extremely important in these market conditions to give added consideration regarding the timing of intra-day scalps with the opening ranges on a session & hourly basis offering further clarity on intra-day biases. 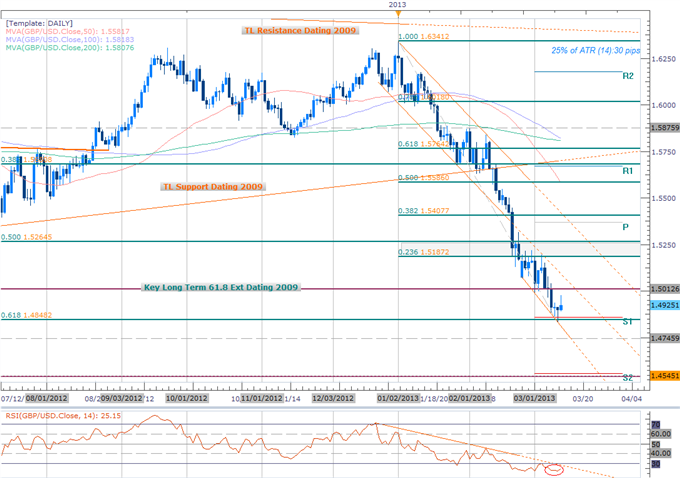 The British Pound has been on our radar for the past few sessions here as the GBPUSD approaches key support at the 61.8% retracement taken from the 2009 range at 1.4850. This level is further supported by the S1 monthly pivot and while our broader bias remains weighted to the downside, the pair remains at risk for a correction higher in the near-term. Interim resistance targets stand at the long-term 61.8% Fibonacci extension taken form the decline off the 2009 high at 1.5012, the 23.6% retracement from the decline off the 2013 high at 1.5187 and 1.5265. Note that daily RSI now looks to challenge trendline resistance dating back to the December highs with such a scenario offering further conviction on a near-term play targeting topside targets. A break below key support puts the broader trend back in focus with support targets seen at 1.4750, and the S2 monthly pivot at 1.4550 (note this is back closely with the 78.6% long-term extension at 1.4540). 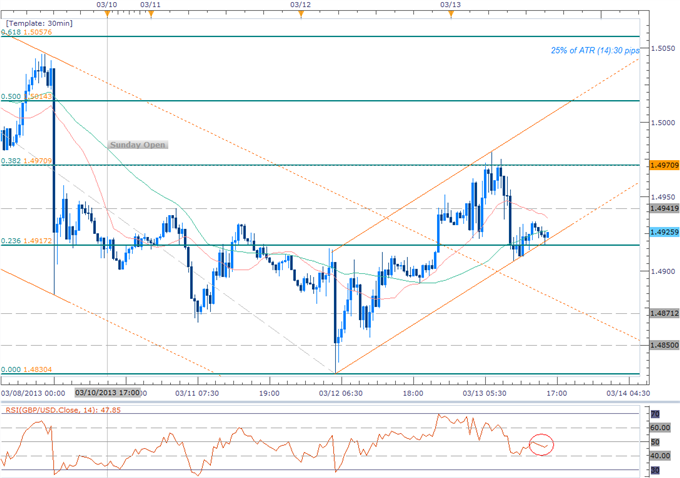 The sterling broke above channel resistance dating back to the March highs yesterday with the move accompanied by and RSI breach above the 60-threshold for the first time this week. Again here we note the increasing probability of a correction with our near-term bias remained weighted to the topside so long as the exchange rate respects the 1.4950 level on a daily close basis. 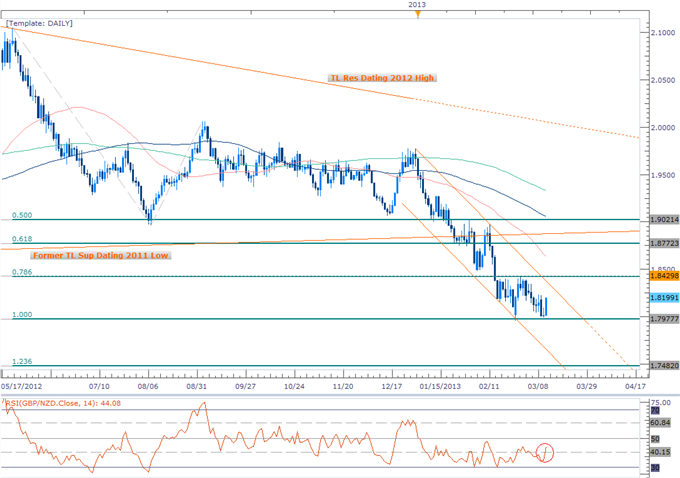 A similar setup has been identified on the GBPNZD which encountered key support in mid-March at the 100% Fibonacci extension taken form the decline off the 2012 highs at 1.7980. The pair broke below a multi-year consolidation within the confines of triangle formation back in January and further declines are expected into our secondary targets at 1.7480 and the range between the 138.2% extension and the long-term key 100% extension taken from the 2011 and 2012 highs at 1.7080-1.7165. Again here it’s important to note that in the near-term the pair may offer more favorable short entries higher up as the RSI signature continues to suggest the risk for correction before continuing lower with a breach above chanel resistance eyeing targets at 1.8430 backed by 1.8775. Only a breach above the 50% extension at 1.9020 invalidates our broader bearish bias. Today’s RBNZ interest rate decision further supports our near-term bullish bias as officials cite concerns regarding the dampening effects of persistant strength in the kiwi. 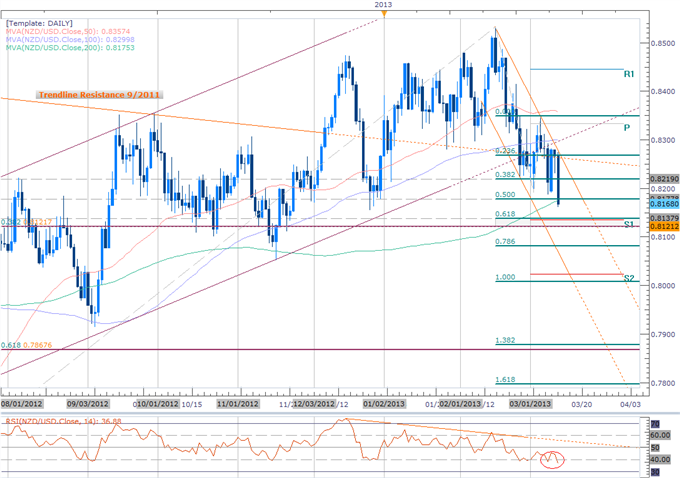 The RBNZ today was the perfect catalyst for the kiwi which broke below daily support at the confluence of the 200-day moving average and the 50% Fibonacci extension taken from the February decline at 8175. Note that daily RSI is now at its lowest levels since early June and the break below the 40-threshold suggests that the broader uptrend for the pair has been invalidated. Key support is now seen in the region between the 61.8% extension and the 38.2% retracement taken from the June advance at 8120-8140. A break below this level risks further declines with such a scenario eyeing subsequent targets at 8080, and the 100% extension just above the 80-handle. Look for channel resistance to limit near-term advances with only a close back above 8270 needed to invalidate our near-term bearish bias. It’s important to note that after such key event risk, the kiwi may see a relief rally before resuming lower with advances offering favorable short entries.