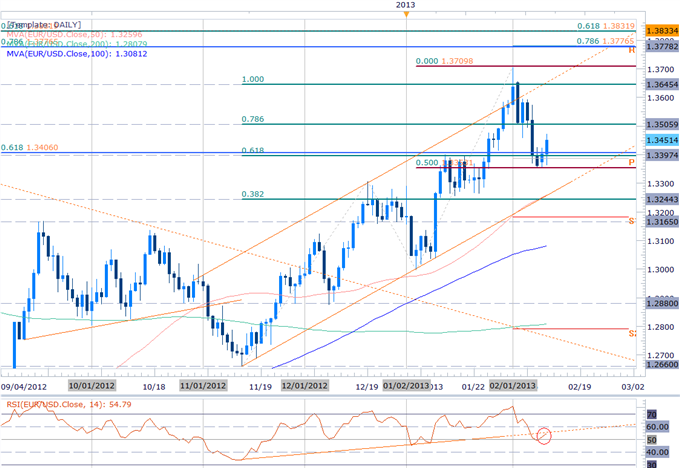 Since last month’s EURUSD Scalp Report was published, the pair has been a textbook play with euro rebounding off our primary objective at 1.3645 which was triggered on February 1st. The single currency has now retraced 50% of the advance off the January lows with a rebound off this level taking the pair back above the 1.34-handle, a level which has served as a key pivot in price action over the past two months. (Note the near-confluence of the 61.8% Fibonacci extension taken from the November advance and the 61.8% retracement from the decline off October 2011 high) The daily RSI signature continues to suggest a constructive outlook for the euro with multiple breaches above 70 and rebounds well ahead of the 40-threshold as price action continues to trade within the confines of a well-defined ascending channel formation. As such, our medium-term bias remains weighted to the topside with only a break below the 38.2% extension at 1.3245 invalidating our broader direction bias. 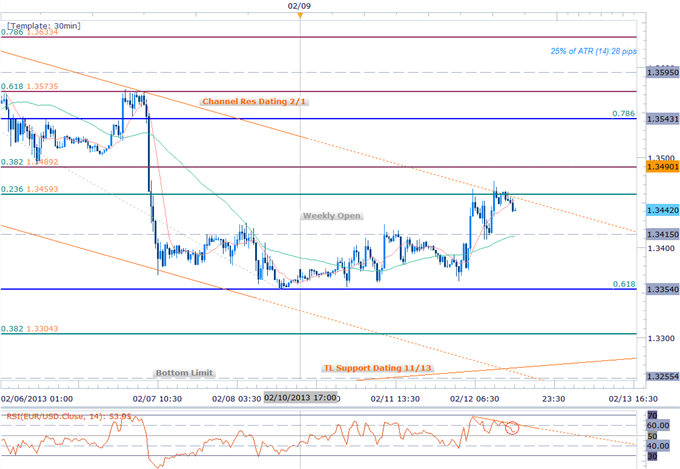 The 30min scalp chart shows the euro continuing to trade within the confines of a well-defined descending channel formation dating back to the February highs with today’s rally failing to mount the confluence of channel resistance and the 23.6% Fibonacci retracement taken from the November advance at 1.3460. The near-term outlook remains weighted to the topside so long as the 1.3355 support structure holds (61.8% Extension taken from the July advance). A break below this mark risks further declines with such a scenario eyeing subsequent support targets at the 1.33-handle and 1.3255.

A breach above interim resistance at 1.3460 puts the topside back into focus with soft targets eyed at 1.3490, 1.3540 and the 61.8% retracement of the decline off the February highs at 1.3574. This level will serve as our topside limit with a breach above this mark (on a close basis) offering further conviction on our directional bias with such a scenario eyeing subsequent resistance targets at 1.3595, 1.3630 and 1.3670. A breach above the monthly highs exposes our objectives at 1.3775 and 1.3880. A quarter of the daily ATR yields profit targets of 25-27 pips per scalp depending on entry. Should ATRto pullback dramatically, adjust profit targets as need to ensure more feasible scalps.

*We will remain flexible with our bias with a break below 1.3245 eyeing subsequent support targets. It’s extremely important in these market conditions to give added consideration regarding the timing of intra-day scalps with the opening ranges on a session & hourly basis offering further clarity on intra-day biases. 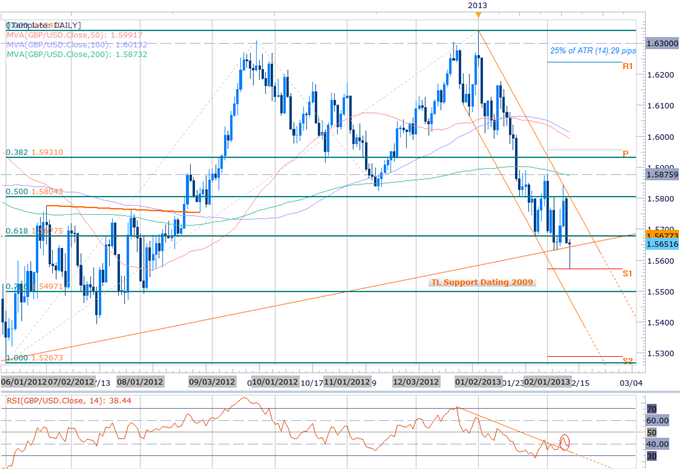 The sterling has been ‘hanging by a thread’ for the past few sessions with price action now testing a key multi-year trendline support dating back to the 2009 lows. The pair has continued to trade within the confines of a neatly formed descending channel formation dating back to the January 1st high with the daily RSI signature suggesting a broader down-trend is underway. Having said that, the break below long-standing trendline support and subsequent rebound off the S1 monthly pivot suggests that today’s decline may have been a false break. Note that a daily close below this trendline is required before we can ‘call the break’ with such a scenario eyeing support targets back at the S1 1.5575 and the 78.6% retracement taken from the June advance just shy of the 1.55-handle. Interim resistance stands at the 61.8% retracement at 1.5677 backed by channel resistance and the 1.58-handle. A weekly close above this mark and a daily RSI breach of the 50-threshold is needed to invalidate our broader bearish bias. 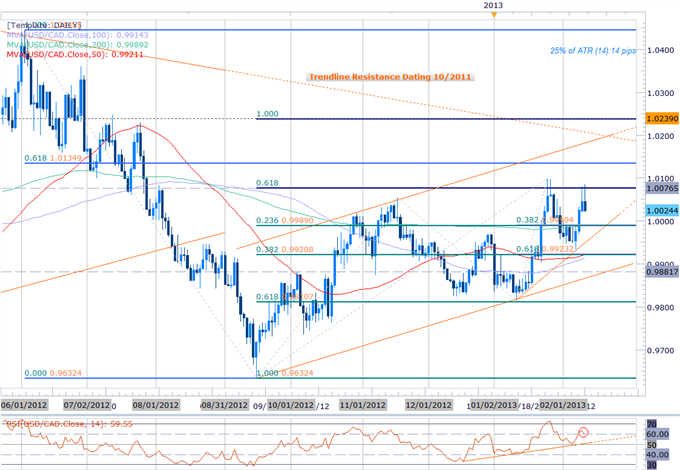 The USDCAD has once again encountered key support at the 61.8% Fibonacci extension taken from the September advance at 1.0076 with mulitple attempts at a breach this year failing to mark a single daily close above this threshold. Our medium-term bias remains weighted to the topside so long as the exchange rate holds above the confluence of the key 61.8% retracement taken from the January advance and the long-term 38.2% retracement taken form the Septmeber advance at 9920. A break below this level looks for a test of channel support of the current opperative ascending channel formation. Look for near-term weakness to offer favorable entries lower with a breach above the February highs targeting the 61.8% retracement from the June decline at 1.0135, trendline confluence at the 1.02 handle and the 100% extension at 1.0239. 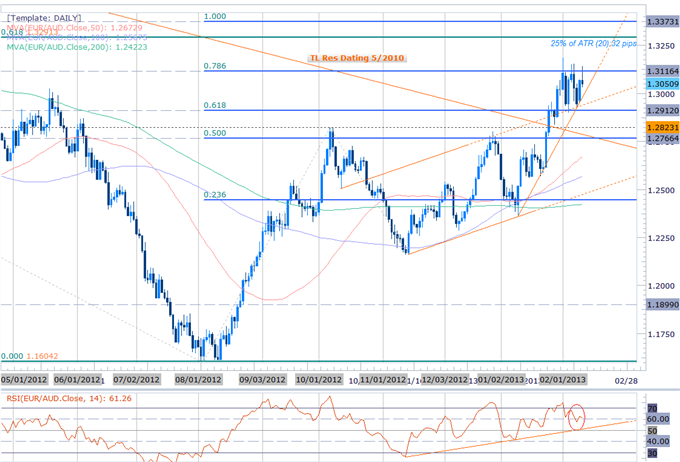 The EURAUD remains on our radar screen as one of our most favored setups after last month’s breach above trendline resistance dating back to May of 2010. The advance has been halted in the near-term by the 78.6% Fibonacci extension taken from the advance off the August lows and has continued to cap the pair on a daily close basis. Our topside objective is eyed at the 61.8% retracement taken from the decline off the 2011 highs at 1.3290 and the 100% extension at 1.3373. Interim support rests with the key 61.8% extension at 1.2910 with only a break below the confluence of the 50% extension and former long-term trendline resistance (now support) at 1.2766 invalidating our near-term bias. 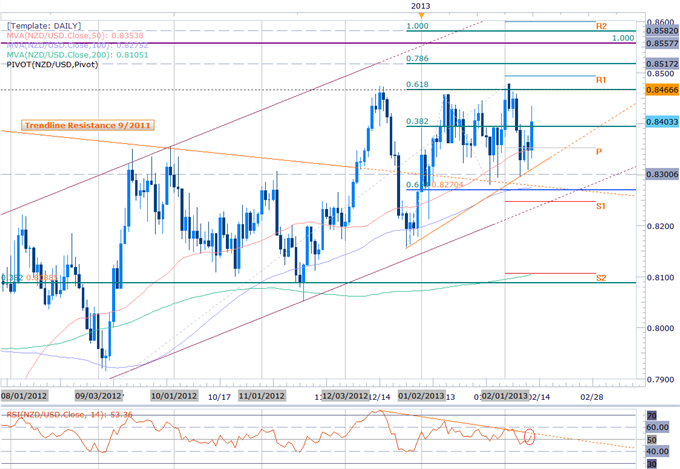 The kiwi has been the source of much frustration since the start of 2013 trade with the pair contiuing to move sideways after mutiple attempts to break the 2012 range highs. Although price action has certainly lacked conviction, an objective look at the RSI signature suggests a strong case for the pair to continue higher as it remains within the confines of an ascending channel formation dating back to the July lows. A daily close above the key 61.8% Fibonacci extension taken from the December lows at 8465 is needed to offer conviction on our bias with such a scenario eyeing objectives at the 78.6% extension at 8517, the long-term 100% extension taken from the November 2011 and May 2012 lows at 8555, and 8580. Only a daily close below the 61.8% retracement taken from the late-December advance at 8270 invalidates our bias with such a scenario looking for a test of channel support.

Join Michael on Wednesday morning for a Live Scalping Webinar on DailyFX Plus (Exclusive of Live Clients) at 1230 GMT (8:30ET)