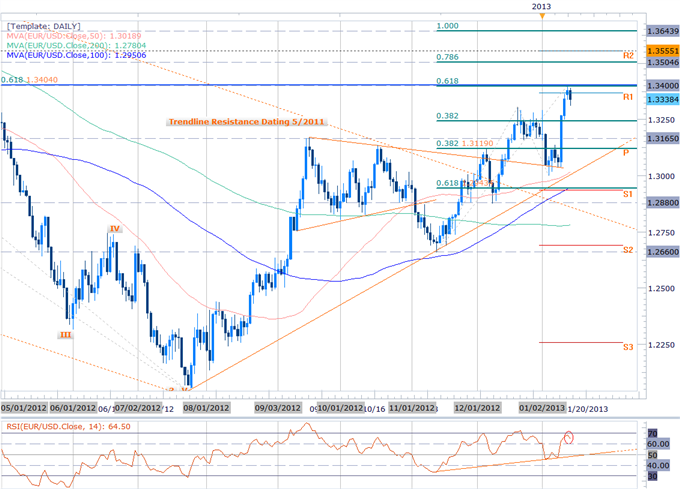 The euro rally has encountered key resistance at the confluence of the 61.8% Fibonacci extension taken from the November and January lows and the 61.8% retracement taken from the decline off the October 2011 high, at the 1.34-handle. With our broader bias remaining weighted to the topside, we reserve this level as our topside limit with a daily close above shifting our focus higher with medium-term objectives eyed at the 78.6% extension at 1.3505 and the 100% extension at 1.3640. Interim daily support rests at the 38.2% extension at 1.3250 with only a daily close below this level invalidating our broader bias. Such a scenario eyes support targets at the 38.2% retracement taken from the November advance at 1.3120. 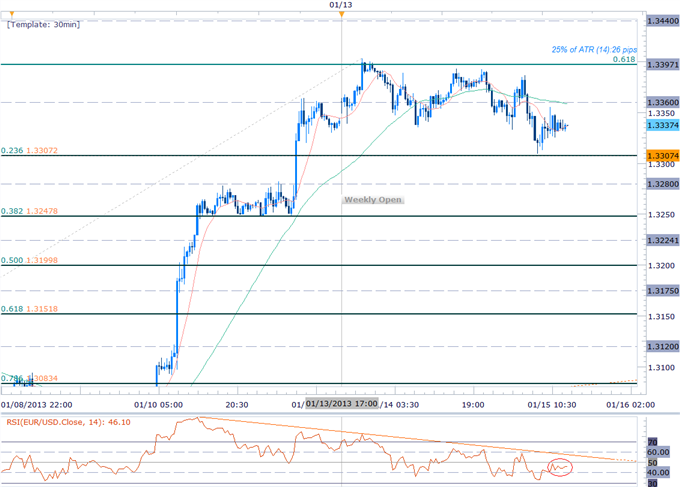 The 30min scalp chart shows the euro continuing to consolidate just below the monthly high (10-month high) just above the 1.34-figure. This critical barrier may cap near-term advances in the interim with our initial bias on this scalp setup weighted to the downside. A break below interim support at 23.6% Fibonacci retracement taken from the January low at 1.3307 eyes subsequent support targets at 1.3280 and the 38.2% retracement at 1.3250. A move below this mark (bottom limit) suggests a deeper correction is under way with such a scenario eyeing support targets at 1.3224, the 50% retracement at the 1.32-handle, 1.3175 and the 61.8% retracement at 1.3150.

A daily close above the 1.34-mark puts the topside back into focus eyeing resistance targets at 1.3440, 1.3480, and the 78.6% extension at 1.3505. A quarter of the daily ATR yields profit targets of 20-22 pips per scalp depending on entry. Should ATRto pullback dramatically, adjust profit targets as need to ensure more feasible scalps.

*We will remain flexible with our bias with a break above 1.34 eyeing subsequent resistance targets. It’s extremely important in these market conditions to give added consideration regarding the timing of intra-day scalps with the opening ranges on a session & hourly basis offering further clarity on intra-day biases. 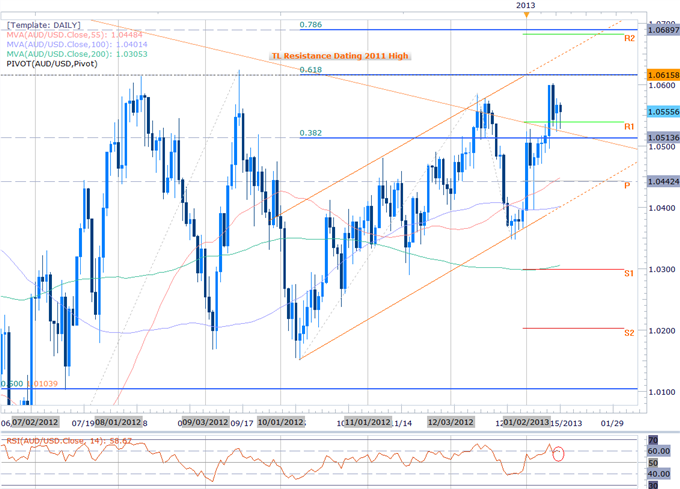 Expect range-bond price action to persist as the pair continues to hold above the 38.2% Fibonacci extension taken from the September and December lows at 1.0514. Note that the breach above this mark represents a possible break of long-term trendline resistance dating back to the 2011 high with our objective remaining at the 61.8% extension at 1.0615. A daily close below 1.0514 suggests a deeper correction may be underway with such a scenario eyeing targets at the monthly pivot at 1.0440 and the 100-day moving average at the 1.04-handle. The RSI signature continues to suggest a broader bullish bias with a close below the 50-mark risking the correction into 1.04. 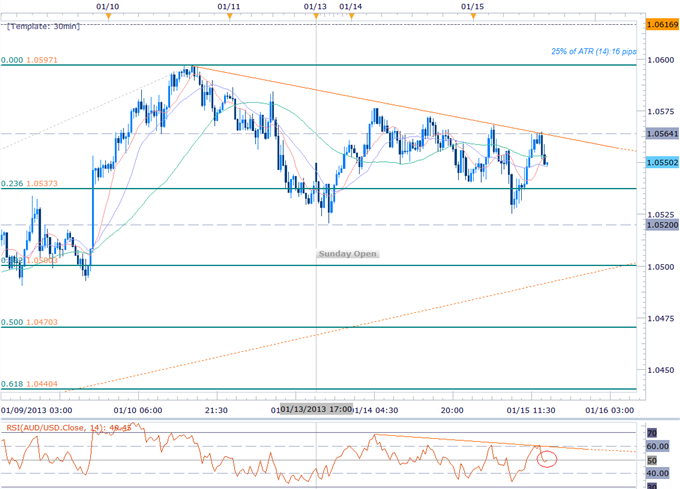 The interim aussie scalp chart utilizes a simple retracement taken from the advance off the December 26th low with soft targets added at 1.0565 and 1.0520. Look target subsequent support levels with a daily close below 1.0540 (monthly R1 pivot) offering further conviction on aussie short-scalps into 1.0513. A close above the weekly high at 1.0578 puts our objective at 1.0615 back into focus. Note that Chinese GDP data released Friday could fuel excess volatility in the pair with consensus estimates calling for a print of 7.7% for the fourth quarter. An at-expectation print or better could further support the pair with such a scenario eyeing a run on our primary objective at 1.0615. 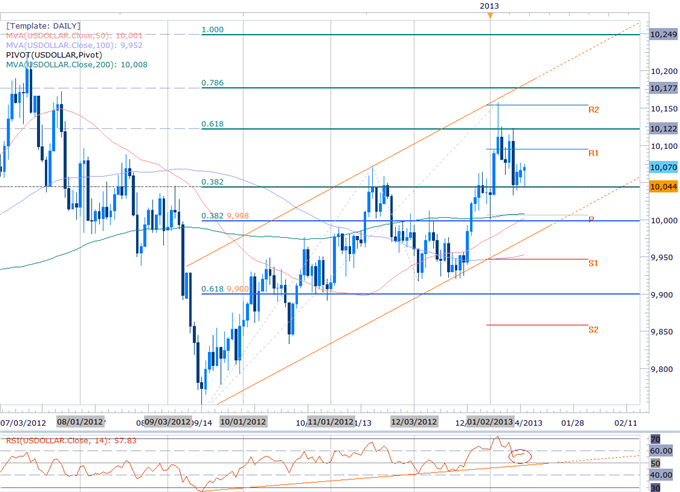 The Dow Jones FXCM Dollar Index (Ticker:USDOLLAR) has now come into support at the 38.2% Fibonacci extension taken from the September and December lows at 10,044. This level continued to serve as a pivot in price action dating back to the start of 2012 with a break below exposing key support at the near-confluence of the monthly pivot, the 200-day moving average, and the 38.2% retracement taken from the September advance just above the 10,000 threshold. Daily resistance stands with the 61.8% extension at 10,122 with a daily close above this mark eyeing 10,177 the July high at 10,223 and the 100% extension at 10,249. Although our broader bias remains weighted to the topside, a break below RSI trendline support dating back to the September low risks a deeper correction with such a move targeting levels sub-10,000.

Join Michael on Wednesday morning for a Live Scalping Webinar on DailyFX Plus (Exclusive of Live Clients) at 1230 GMT (8:30ET)