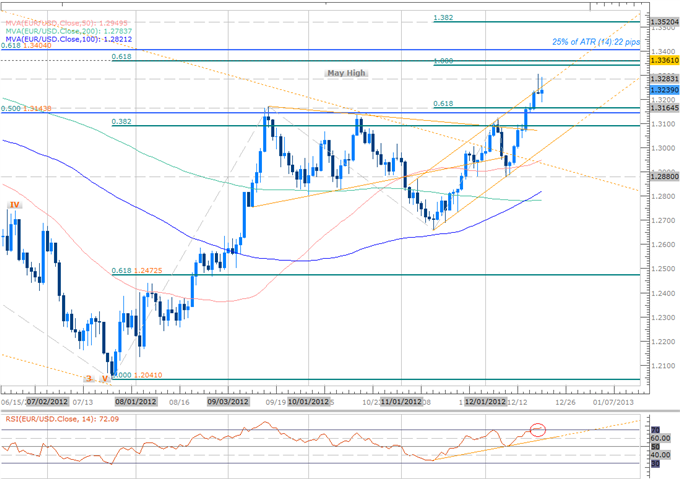 Forex Technical Analysis- End of Year Setups Across the Majors

The EURUSD has continued to trade within the confines of an ascending channel formation dating back to the November lows with the pair losing steam just ahead of the May high of 1.3283. While we may see some weakness in the near-term off this level, we continue to eye out topside objective at the 100% Fibonacci extension taken off the November advance at 1.3340 with a breach above this mark eyeing immediate targets at the 61.8% longer-term extension taken off the July advance at 1.3360 and the 61.8% retracement taken from the decline off the October 2011 highs at the 1.34-handle.

Interim support now rests in the region between the 50% retracement and the 61.8% Fibonacci extension off the November low at 1.3145-1.3165. A break below the 38.2% extension just shy of the 1.31-handle invalidates our medium-term bullish bias with such a scenario eyeing channel support and the monthly lows at 1.2880. Note that daily RSI has continued to hold above trendline support dating back to the November low with a break below this possibly fueling a deeper correction below 1.31. 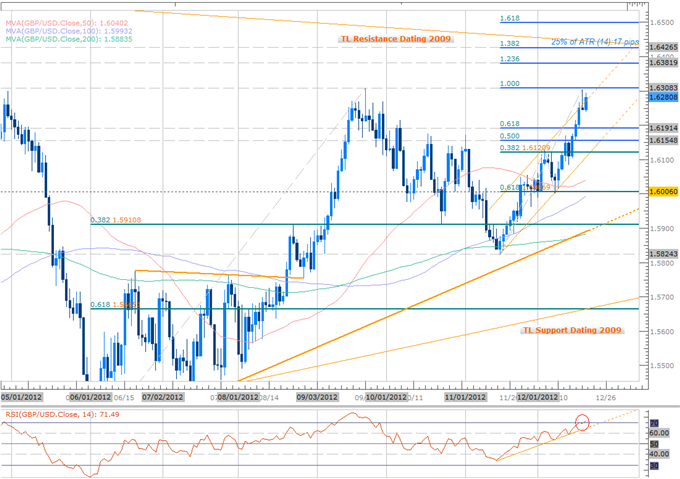 The sterling has been one of our top performing scalps over the last 5 weeks with the GBPUSD testing key resistance at the 100% Fibonacci extension taken from the November advance at the 1.63-handle. This threshold has been tested multiple times this year, once in April and once again in September, with the level promptly halting each advance. While our medium-term outlook for the pound remains weighted to the topside, this level may once again invoke a reaction as RSI struggles to mount the 70-mark. A complete outlook on the GBPUSD and GBPJPY will be highlighted in the 2013 Trades of the Year, which will be published next week.

A breach above 1.63 warrants action with topside targets eyed at 1.6380 and the 138.2% extension at 1.6425. Note that depending on time, this level may also confluence with long-standing trendline resistance dating back to the 2009 high and longs into this target should be booked. Secondary objectives are eyed at the 161.8% extension just shy of the 1.65-figure.

Should the December 19th high be respected, look for interim support at the 61.8% extension at 1.6190 with subsequent break targets eyed at 1.6155 and the 38.2% retracement taken from the November advance at 1.6120. (Obviously if the high is compromised this retracement will need to be adjusted to reflect the new high). A break below this mark invalidates our medium-term outlook with such a scenario eyeing targets at the 61.8% retracement at 1.6006 and the 38.2% retracement taken from the June advance (also the October low) at 1.5910. 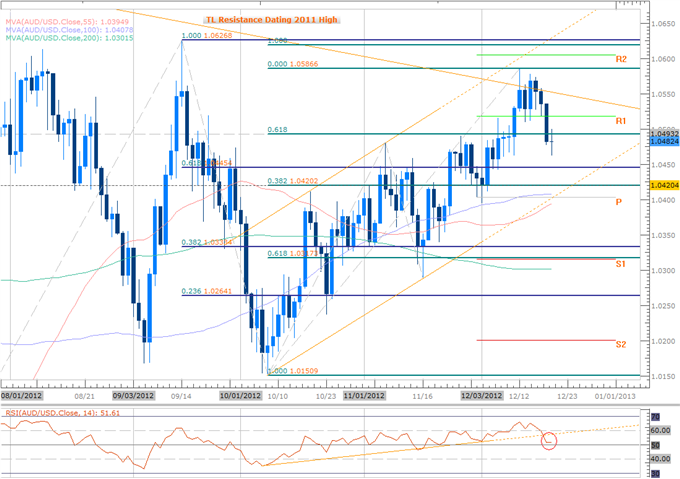 The Aussie has failed to hold a break above trendline resistance dating back to the July 2011 highs with the pair holding just below interim resistance at the 61.8% Fibonacci extension taken from the October and November lows at 1.0495. The pair remains constructive so long as support at the 38.2% retracement taken from the October advance at 1.0420 is respected. This level has served as a pivot in price action dating back to July and a break below risks further declines into the support region between the 61.8% retracement and the 38.2% longer-term retracement from the September decline at 1.0315-1.0335. 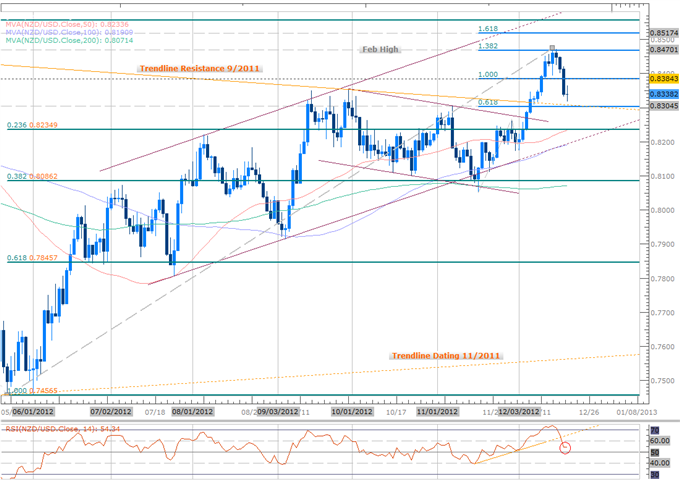 The kiwi has been a rock star this year with the NZDUSD advancing more than 7% year-to-date. The advance took the pair through trendline resistance dating back to the 2009 highs before topping at the confluence of the 138.2% Fibonacci extension taken from the November advance and the February high at 8470. The broader bias remains weighted to the topside while despite the recent correction with key near-term support seen at the three way confluence of the 61.8% extension, former trendline resistance and the November highs just above 8300. Only a break below the 23.6% retracement taken from the June advance at 8235 invalidates our outlook with such a scenario risking a decline into the November lows and 200-day moving average below 8100.

A breach above interim resistance at 8385 looks for another run on 8470 with break targets above this mark eyed at 8517 and the 100% long-term Fibonacci extension taken from the November 2011 and May 2012 troughs at 8555. Note that RSI is now poised for a test of the 50-mark with a break below possibly signaling a deeper correction in the pair. 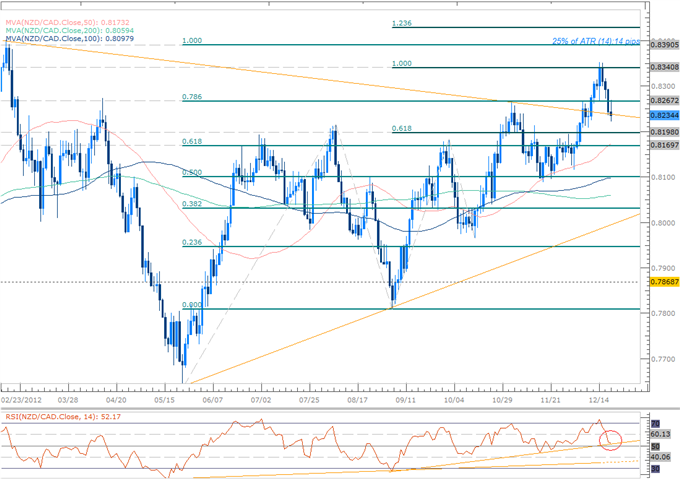 The NZDCAD pair has continued to trade with precision between key Fibonacci extensions with the pair completing a full 100% extension off the September and October lows. Key interim support rests in the region between the long & medium-term 61.8% extensions at 8170-8198 with an accompanied break in RSI trendline support offering conviction on a deeper correction into 8100.

A breach above the confluence of the November highs and the 78.6% extension at 8267 looks for another run on the highs as this level has served as a pivot in price action dating back to the start of the year. Key resistance stands at the long-term 100% extension just ahead of the 84-handle, a level that has been capped two previous advances over the past two years. 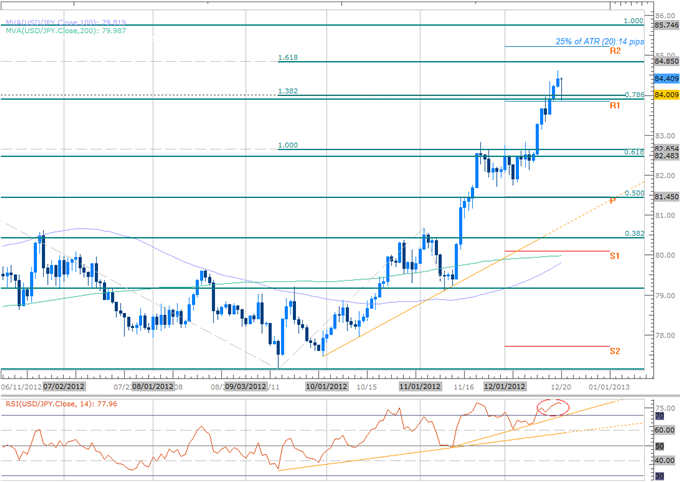 Use Caution. . . Key support now at Fibonacci confluence 83.85-84.00 with an accompanied RSI break below the 70-threshold opening up a deeper correction possibly into the support region between 82.50-82.65. Broader prospects for the pair remain bullish as we head into 2013 on account of expected aggressive easing from the Bank of Japan. Topside targets are eyed at 84.85, 85.25 and 85.75.