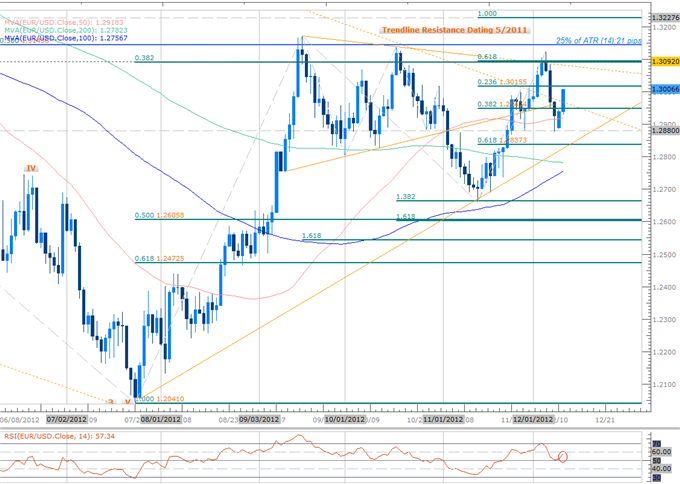 In last week's Scalp Report, we highlighted the EURUSD which was approaching key resistance at the 1.31-threshold. Indeed this level held with the pair triggering all of our support targets before reversing just below Break Target 4 at 1.2896 (low 1.2875). In Monday's Analyst Pick we noted the long bias initiated at the Sunday gap open with topside targets eyeing, "key resistance at 1.2950 with a break above this level alleviating further near-term weakness into 1.3015." The 23.6% retracement taken from the November advance rests here and the pair now looks poised for a test of this key level ahead of tomorrow's highly anticipated FOMC rate decision where Bernanke is expected to announce a new form of easing as operation twist comes to an end in 2012. Note that we leave room for a run-up into last month's high and the 61.8% retracement from the November high at 1.3030 before invalidating our near-term bearish bias with such a scenario targeting levels just shy of the 1.31-handle. Longer-term prospects remain bearish below this level. 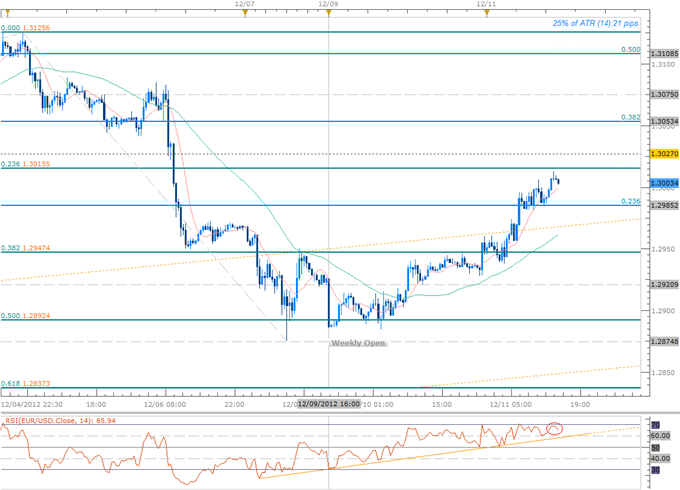 The 30min scalp chart shows the euro rebounding off the 50% retracement at 1.2892 with the Sunday gap open offering an obvious long bias early in the week. Interim resistance now stands at the 1.3015 with a breach above our topside limit at 1.3030 eyeing resistance targets at the 38.2% Fibonacci extension taken from the November and December lows at 1.3053 and the 50% extension at 1.3108. The region between 1.3108 and the monthly high at 1.3125 represents a high-risk scenario as it is likely to serve as a pivot in price action.

With the FOMC on tap tomorrow, traders are encouraged to limit exposure as we head into the print with the subsequent press conference likely to fuel added volatility in USD based pairs.

*We will remain flexible with our bias with a break below1.30 eyeing subsequent support targets. It’s extremely important in these market conditions to give added consideration regarding the timing of intra-day scalps with the opening ranges on a session & hourly basis offering further clarity on intra-day biases. 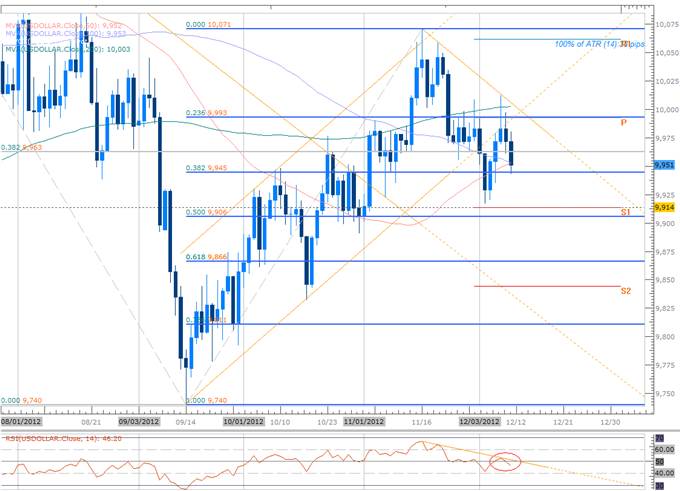 The Dow Jones FXCM Dollar Index (Ticker:USDOLLAR) has now come into support at the 38.2% retracement taken from the September advance at 9945. This level continued to serve as a pivot in price action and tomorrow's rate decision could tip the scales. A break below 9945 exposes key support in the region between the 50% retracement and the S1 monthly pivot at 9906-9914. Interim topside resistance now stands at 9963 backed by the confluence of the 23.6% retracement and the monthly pivot at 9993 with a move above the 200-day moving average at 10,003 alleviating further downside pressure. Note that RSI has continued to hold above the 40-threshold suggesting that the pullback off the November highs may simply be a near-term correction in a broader bull market. 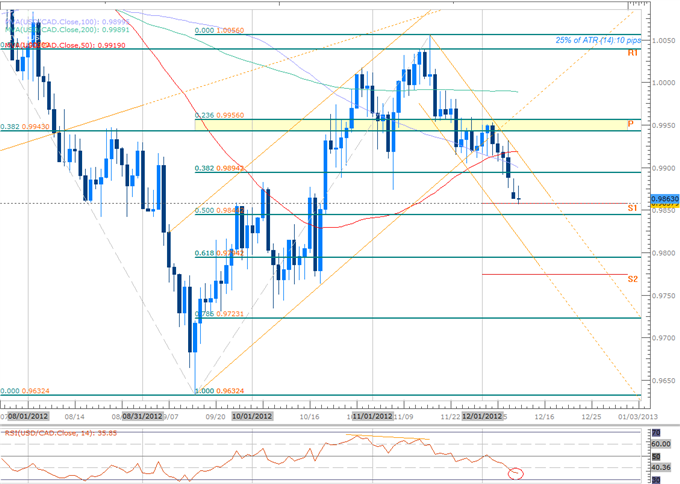 The USDCAD has now approached what I believe to be a possible inflection point with the pair holding just above the support region between the 50% retracement taken from the August advance and the S1 monthly pivot at 9844-9858. The Fed may serve as a catalyst here with longs taken from this range targeting Fibonacci resistance at 9940-9955 (confluence with monthly pivot). A break below 9844 exposes the key support at the 61.8% retracement and the S2 monthly pivot at 9775-9795. 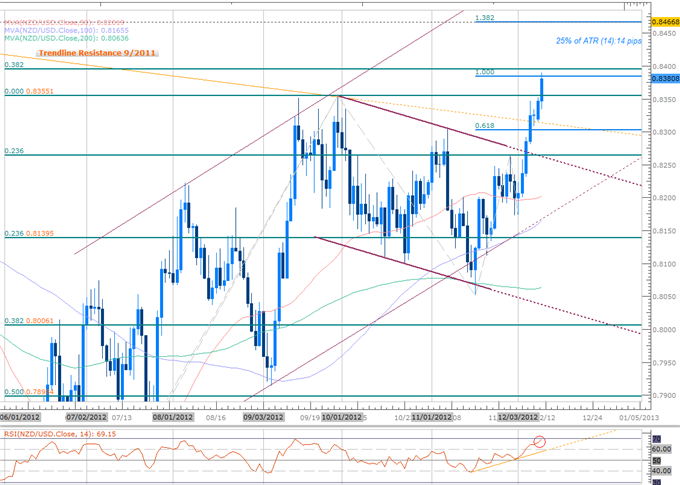 The New Zealand dollar has posted an impressive rally off the November lows with the NZDUSD encountering key resistance today in the region between key Fibonacci extensions at 8385-8400. This move now completes a 100% extension off the initial advance off the November lows with a breach above this mark accompanied by a breach of the 70-level in RSI targeting the confluence of the 138.2% extension and the February highs at 8465. Note that while the structure of the advance remains bullish, a pullback here looks to target 8355 and the confluence of the 61.8% extension and the November high just above the 83-handle. Only a break below 8260 invalidates our broader bias. 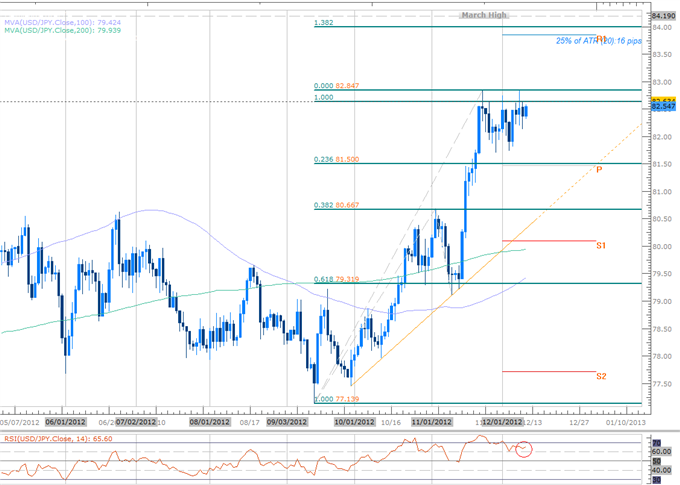 Although we rarely take positions in the yen on a scalp basis, tomorrow's print may offer opportunities as the currency typically reacts strongly to dollar developments. That said, we note key resistance at the 100% Fibonacci extension taken from the September and November lows at 83.64 with a breach above the monthly high eyeing the region between the R1 monthly pivot and the 138.2% extension at 83.85-84.00. Key support rests at the confluence of the 23.6% retracement taken from the September advance and the monthly pivot at 81.50.

Join Michael on Wednesday morning for a Live Scalping Webinar on DailyFX Plus (Exclusive of Live Clients) at 1330 GMT (8:30ET)