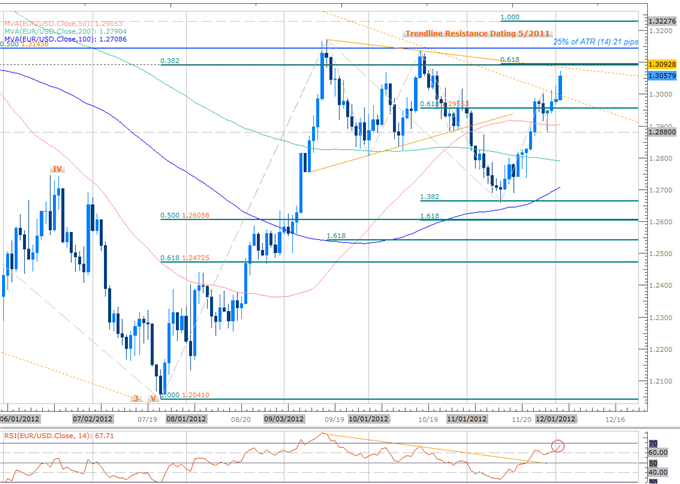 The euro broke above long standing channel resistance dating back to the 2011 highs today exposing key resistance at the confluence of the 38.2% and 61.8% Fibonacci extensions just above 1.3090. This level also coincides with trendline resistance extending off the September high and will serve as our topside limit. A close above this mark offers further conviction on long scalps with such a scenario eyeing topside objectives at the October high at 1.3138 and the September highs at 1.3170. Note that daily RSI has continued to hold above the 60-threshold with a breach above 70 likely to provide the pair with enough momentum for a test of the 100% extension taken off the November lows at 1.3227. Only a break below the 1.30-handle alleviates further dollar losses. 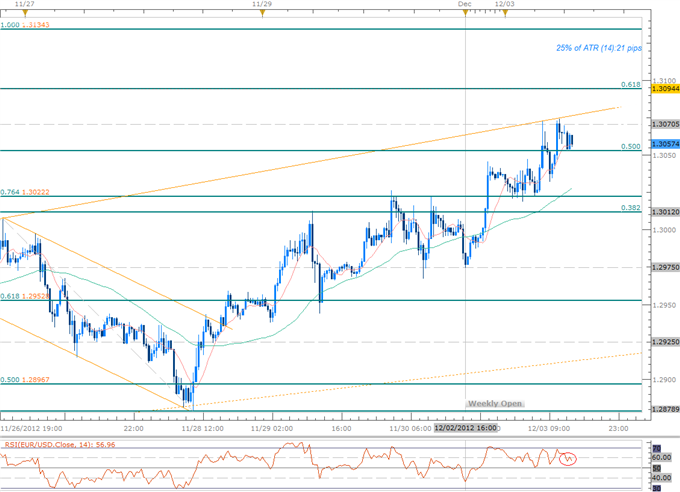 The 30min scalp charts shows the euro holding just below soft resistance at 1.3070 (10/5 high) with the pair continuing to respect trendline resistance dating back to the 11/23 high. A breach above this mark targets our topside limit at the 61.8% Fibonacci extension taken from the November 13th and 28th troughs at 1.3094. Should this level be compromised, look for further advances with subsequent resistance targets seen at 1.3130, 1.3150, the 1.32-handle and the 100% extension at 1.3227.

Minor RSI divergence warns of a possible near-term correction with a break below interim support at 1.3050 targeting 1.3022. A break below our bottom limit at the 38.2% Fibonacci extension at 1.3012 shifts our focus lower with subsequent floors seen at 1.2975, the 61.8% retracement off the October decline at 1.2952, 1.2925 and the 50% retracement 1.2896. A quarter of the daily ATR yields profit targets of 20-22 pips per scalp depending on entry. Should ATRto pullback dramatically, adjust profit targets as need to ensure more feasible scalps.

*We will remain flexible with our bias with a break below1.30 eyeing subsequent support targets. It’s extremely important in these market conditions to give added consideration regarding the timing of intra-day scalps with the opening ranges on a session & hourly basis offering further clarity on intra-day biases. 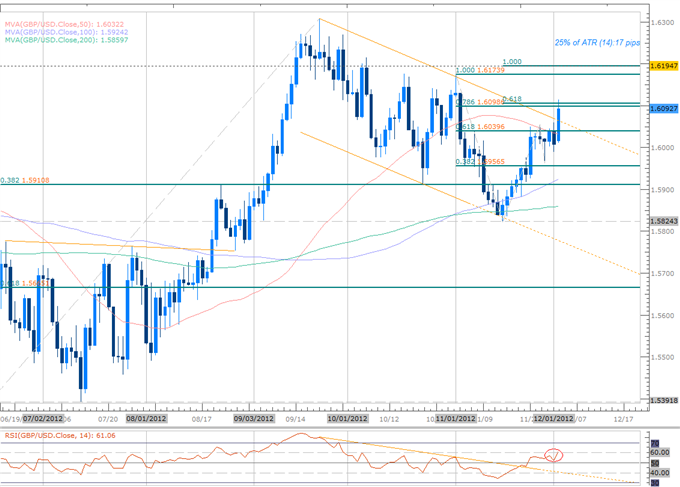 The 1.6040 barrier noted in our last GBPUSD Scalp Report has now been compromised with the move triggering profit targets at the near confluence of the 61.8% extension off the November lows and the 78.6% retracement taken from the November decline just shy of the 1.61-handle. Note that daily RSI is now testing the 60-threshold with a breach above this mark likely to offer the pair with enough momentum for a test of key resistance in the region between the November highs and the 100% extension at 1.6175/95. Though we are flat here, we maintain our broader bullish bias so long as price action remains above the 38.2% retracement taken from the November decline at 1.5957. Scalp targets noted in the report. 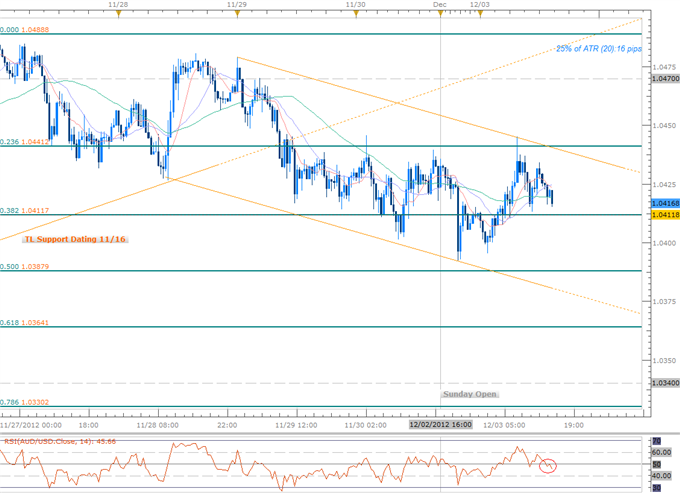 With the RBA on tap tonight, expect some volatility in the aussie with a simple retracement taken off the November 16th advance serving as our scalp setup. As noted in today's Analyst Pick, Credit Suisse overnight swaps are factoring in a 92% chance of a 25bps cut with twelve month expectations calling for an additional 71bps in cuts. As such we believe that the risk is now weighted to the upside if the RBA fails to deliver with the accompanying policy statement likely to offer further clarity on future monetary policy.

We noted in last week's scalp report, “It's difficult to justify aggressive short-scalps unless the 1.0415-threshold is compromised (on a close basis) as the level has served as a clear pivot in price action over the past few months. Note that RSI has continued to hold below the 60-mark suggesting that the recent rally remains within confines of a broader consolidation pattern off the February highs. "A close below this mark puts our primary objective in focus at 1.0335. Also note that the 23.6% retracement at 1.0440/45 coincides with the 61.8% retracement taken from the September decline and has served as a pivot over the past few months. A topside break above this mark warrants action in my opinion with such a scenario eyeing targets at 1.0470, last month's high at 1.0488 and the 1.05-handle.

Join Michael on Tuesday morning for a Live Scalping Webinar on DailyFX Plus (Exclusive for Live Clients) at 1530 GMT (10:30ET)