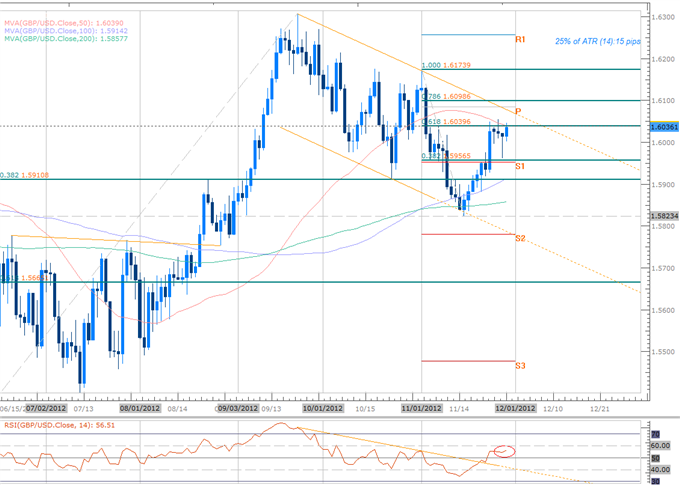 The Sterling continued to hold the range highlighted in Monday's Scalp Report between 61.8% retracement taken from the November 1st decline at 1.6040 and the near-confluence of the S1 monthly pivot and the 38.2% retracement at 1.5955. I noted that, "While we maintain our bullish bias on the pound, it's important to note that a pullback into the S1monthly pivot may be in the cards before heading higher," with the pair missing a tag of key support by just 7pips before reversing higher. Topside advances above the 1.6040 threshold should be approached with caution after multiple failed attempts with resistance seen just higher in the region between the monthly pivot, the 78.6% retracement at 1.6085-1.61 (channel resistance). Note that daily RSI has offered little assistance in ascertaining directional bias with session opening-ranges offering clear conviction trades in this setup over the past 72hours. Only a break back below the 38.2% retracement taken from the June advance at 1.5910 invalidates the advance off the monthly low. 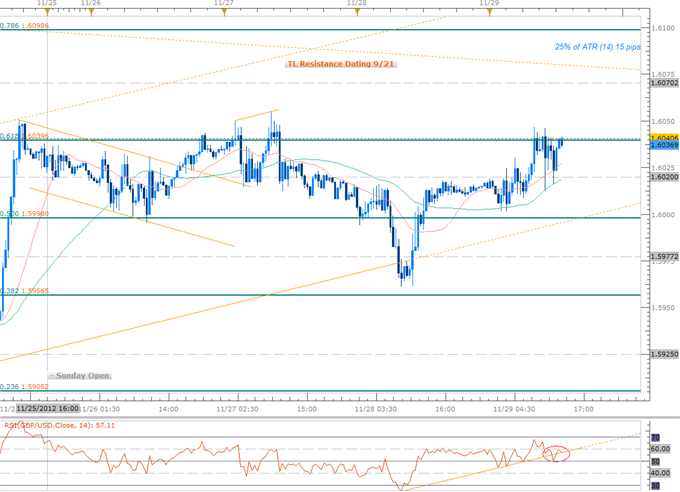 The 30min scalp chart shows the pound continuing to trade within the confines of an ascending channel formation dating back to the November 16th lows after false break in early pre-market trade on Wednesday. Although I didn't note the 1.6020 soft target in Monday's report, the level has served as a decent pivot this week with initial support resting at the 50% retracement at 1.5998. A break below this mark (confluence with channel support) offers further conviction on intra-day shorts with subsequent targets seen at 1.5977 (soft support) and the 38.2% retracement at 1.5955. Subsequent break targets are seen at 1.5925 and the 23.6% retracement at 1.5905.

A breach above weekly high shifts our focus upward with topside targets eyed 1.6070 and the 78.6% retracement at 1.6098. Note that channel resistance bisects this range and as such caution on long scalps here should be exercised. 1.6174. A quarter of the daily ATR yields profit targets of 15-18 pips per scalp depending on entry. Should ATRto pullback dramatically, adjust profit targets as need to ensure more feasible scalps.

*We will remain flexible with our bias with a breach above the 1.6040 eyeing subsequent resistance targets. It’s extremely important in these market conditions to give added consideration regarding the timing of intra-day scalps with the opening ranges on a session & hourly basis offering further clarity on intra-day biases. 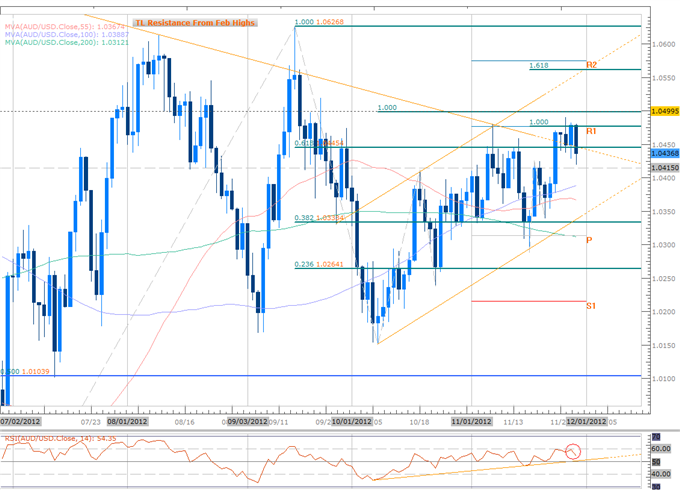 The Australian dollar has been in our sites for the entire week as discussed in the morning scalp webinars. Again here opening ranges have offer conviction on intra-day directional biases with the pair largely remaining range bound for the entire week. Today's move back below the 1.0440/45 threshold was halted at a near-term channel support formation highlighted below with a close here putting a bearish tone on the pair. It's difficult to justify aggressive short-scalps unless the 1.0415-threshold is compromised (on a close basis) as the level has served as a clear pivot in price action over the past few months. Note that RSI has continued to hold below the 60-mark suggesting that the recent rally remains within confines of a broader consolidation pattern off the February highs. 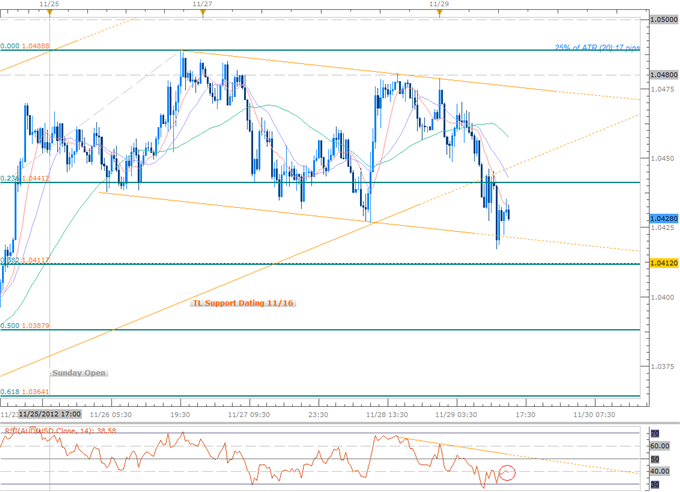 The scalp chart shows the AUDUSD continuing to respect near-term channel support with the region just above the 38.2% retracement at 1.0412 posing high risk for shorts. Although one suggested wave-count here could prove bullish (possible ABC completion off the highs), today's decline has now compromised channel support dating back to the 16th and could trigger further losses. Lack of clarity on this setup leaves more to be desired at current levels and we'll continue to monitor price action closely.

A break below the 38.2% retracement puts into focus targets at 1.0388 and the key 61.8% retracement at 1.0365. Subsequent support targets are seen at 1.0340 and the 1.03-handle. A move back above the 1.0445-threshold puts range bound strategies back into play targeting channel resistance. Should the 1.05-handle be overtaken, look to target the 161.8% Fibonacci extension taken from the initial advance off the monthly lows just above the 1.0550-level.

*Use caution heading into the close of the month with next month's opening range likely to offer further conviction on medium-term directional biases as markets react to interest rate decisions from both the Bank of England and the Reserve Bank of Australia. The RBA will be of particular interest with Credit Suisse overnight swaps factoring in a 73% chance of a 25bps cut next week. Twelve month expectations continue to call for an additional 60bps in cuts. With these pairs at such critical levels, the event risk could act as a catalyst and offer conviction on intra-day and medium-term outlooks. 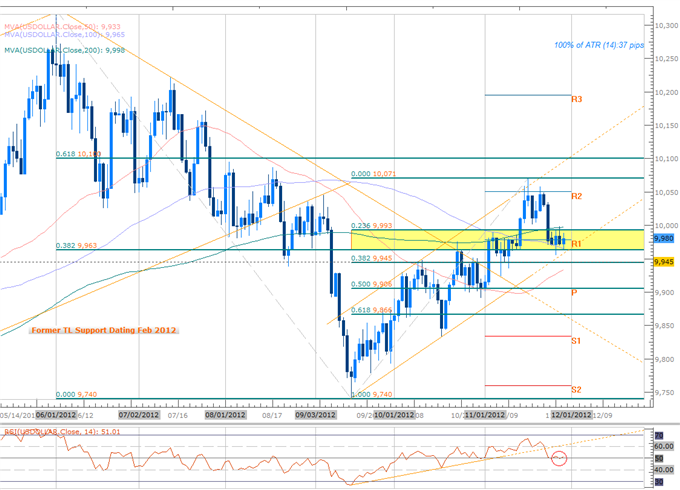 We noted this setup on the Dow Jones FXCM Dollar Index (Ticker: USDOLLAR) in the last Scalp Report with the decline off the R2 monthly pivot continuing to hold a key range between 9960 and 9995. There has been no change to the broader outlook- " Note that daily RSI is now (continuing to) testing that 50-mark with a break below this level likely to take the index into key support between the 38.2% retracements at 9945-9963. The index remains constructive (bullish) above this region with a move below this mark suggests a deeper correction into the confluence of the 50% retracement and the monthly pivot at 9906."