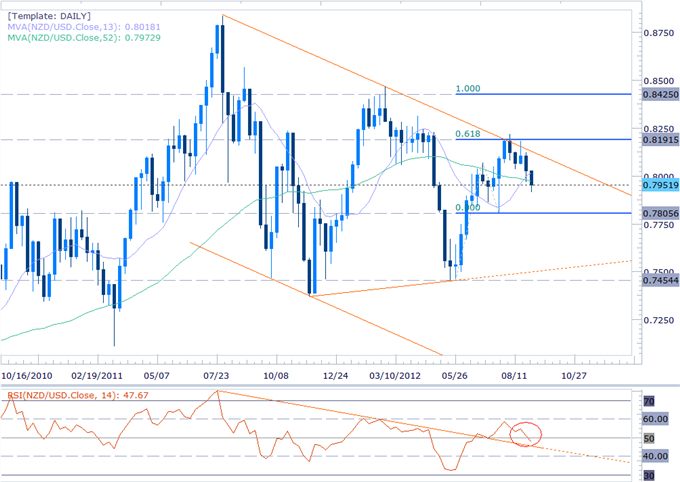 NZDUSD at Risk Ahead of ECB, NFP- Break Below 7930 To Trigger Scalps

In light of broader risk trends, the NZDUSD looks poised for further declines with a break below key support opening the door to our initial objective at 7818. As the economic docket for New Zealand remains bare for the remainder of the week, we will be taking cues from shifts in market sentiment with the ECB rate decision and NFPs taking center stage. These events may offer the catalyst needed to trigger our scalp setup.

The New Zealand dollar has remained under pressure since encountering critical resistance in early-August at the confluence of the trendline resistance dating back to the 2011 high and the 61.8% Fibonacci extension taken from the May and July lows at 8191. The exchange rate has now broke below the 13 and 52-week moving averages for the first time since June suggesting that near-term momentum remains weighted to the downside. Note that weekly RSIhas now broken back below the 50-threshold for the first time since mid-June with a break below former trendline resistance dating back to the 2011 high offering further conviction on our directional bias. 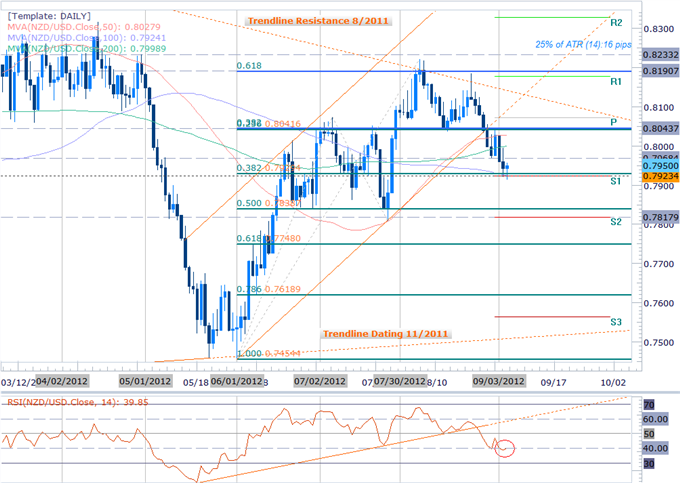 A look at the encompassing structure sees the NZDUSD consolidating into the apex of a broad triangle formation dating back to late-2011 with the pair currently resting on key support at the near-confluence of the 38.2% Fibonacci retracement taken from the June advance and the S1 monthly pivot at 7929. A daily close below this mark puts our setup into play with a daily RSI break below the 40-threshold suggesting that a broader trend-shift may be underway with further weakness expected in the near-term. We maintain our bearish bias on the kiwi so long as price action continues to respect key resistance at the 8040 mark. This level represents the confluence of the 23.6% retracement and the 38.2% Fibonacci extension taken from the June and July lows, and has been a clear pivot in price action dating back to 2011. Note that daily ATR has now reached its lowest levels since mid-2007 when the indicator bottomed just below the 60-mark. It’s worth noting that a rise in volatility in July of that year gave way to a massive decline that saw the kiwi plummet nearly 1400 pips before finding support just below the 66-handle. 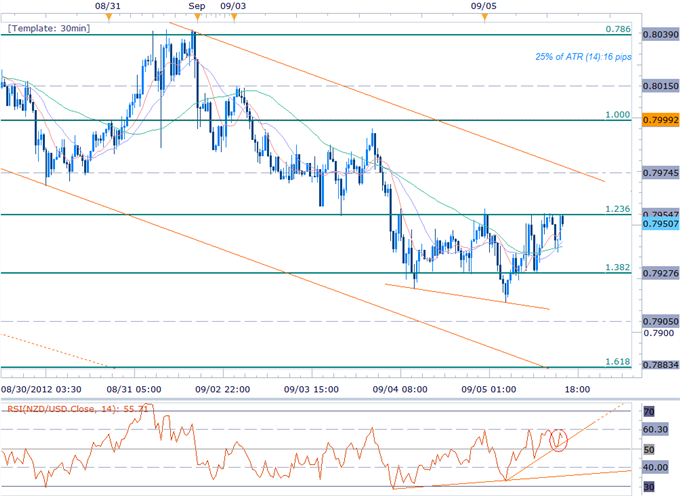 Our scalp chart shows the NZDUSD trading within the confines of a descending channel formation dating back to the August 22nd high with the pair currently trading just below the 123.6% Fibonacci extension taken from the August 6th and 22nd crests at 7954. Interim support rests with the pivotal 7927 mark (note confluence with daily 38.2% retracement and the monthly pivot) with a break below this key level eyeing subsequent intra-day support targets at 7905, the 161.8% extension at 7883, 7860, and the 50% retracement at 7739. Our initial objective rests with the S2 monthly pivot at 7818.

A break above interim resistance eyes subsequent ceilings at 7975 and out topside limit at the 100% extension at the 80-handle. A breach above this level puts us neutral with a move above key resistance at the 78.6% extension at 8040 (note confluence on daily chart) invalidating our bias. Such a scenario eyes topside targets at the monthly pivot at 8070, 8092 and the 38.2% extension at 8115. A daily average true range of 61 pips yields profit targets of 16-19 pips depending on entry. Should ATR pull back dramatically, adjust profit targets as needed to ensure more feasible scalps.

*We will remain flexible with our bias with a breach above 8040 eyeing subsequent resistance targets. It’s extremely important in these market conditions to give added consideration regarding the timing of intra-day scalps with the opening ranges on a session & hourly basis offering further clarity on intra-day biases.

Join Michael on Thursday morning for a Live Scalping Webinar on DailyFX Plus (Exclusive of Live Clients) at 1230 GMT (8:30ET)