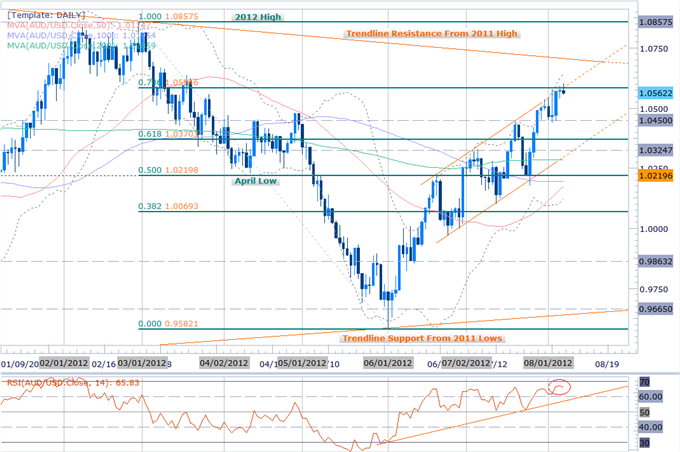 The Australian dollar seems poised for a correction lower after posting an impressive 10.6% rally off the June 1st lows at 9582, with price action now retracing 78.6% of the entire decline off the 2012 highs made in late February. AUDUSD options show that 3-month volatility expectations have fallen below the 10% threshold for only the third time since 2008, suggesting that a near-term top may now be in place. The proximity to our topside limit at the 1.06-figure offers favorable risk-reward on aussie shorts with clearly defined downside targets now in view.

A look at the encompassing structure sees the AUDUSD continuing to press key resistance at the confluence of channel resistance dating back to the June highs and the 78.6% Fibonacci retracement taken from the late-February decline at 1.0585. This level remains paramount for the aussie with a break above the overnight high at 1.0604 risking a run-up to trendline resistance dating back to the 2011 highs, currently around the 1.07-handle. As such, we will reserve this level as our topside limit which if compromised invalidates our medium-term bearish bias. Bearish divergence on daily RSI suggests a near-term pullback may be underway with daily support seen at the 1.0450 pivot and the 61.8% retracement at 1.0370. 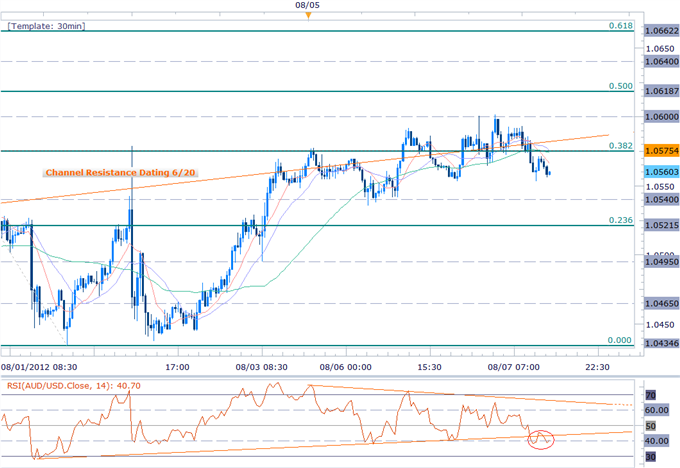 Our scalp chart shows the AUDUSD consolidating around the confluence of the aforementioned channel resistance and the 38.2% Fibonacci extension taken from the July 24th and August 1st troughs at 1.0575. The RSI break below trendline support dating back to the start of the month suggests further downside is likely with a move below the 40-mark offering further conviction on intra-day short-scalps. Interim support targets are eyed at 1.0540, the 23.6% extension at 1.0520, 1.0495, and 1.0465. A break below the monthly low at 1.0435 offers further conviction on our directional bias with such a scenario eying targets lower at 1.0405 and the 61.8% retracement at 1.0370.

A breach above our topside limit at 1.06 invalidates our bias and exposes topside resistance levels at the 50% extension at 1.0618, 1.0640, the 61.8% extension at 1.0662, and the January highs at 1.0689. Note that long standing trendline resistance dating back to the 2011 highs rests just above this level. A daily average true range of 97 pips yields profit targets of 21-23 pips depending on entry. Should ATR pull back dramatically, adjust profit targets as needed to ensure more feasible scalps.

*We will remain flexible with our bias with a breach above topside limit at 1.06 eyeing subsequent resistance targets. It’s extremely important in these market conditions to give added consideration regarding the timing of intra-day scalps with the opening ranges on a session & hourly basis offering further clarity on intra-day biases.

The Reserve Bank of Australia held the benchmark interest rate at 3.50% last night with the policy statement offering little in the way of concrete guidance regarding future monetary policy. All eyes now turn to the Chinese inflation report out tomorrow night with consensus estimates calling for the slowest pace of price growth since January 2010 at just 1.7% y/y. Look for a weaker-than-expected read to further weigh on aussie prospects as growth in its largest trade partner continues to show signs of slowing.