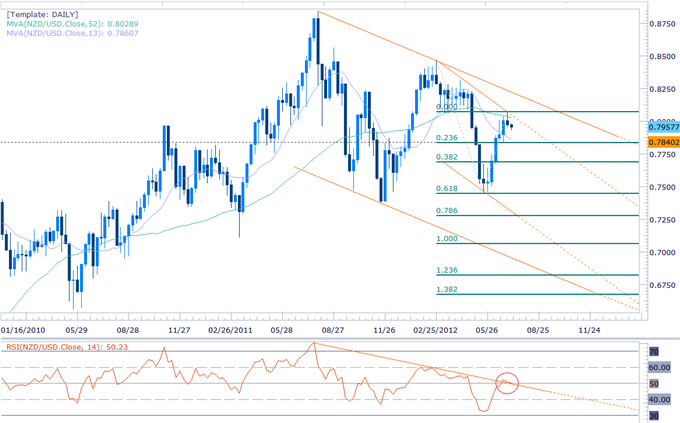 Although the New Zealand dollar has remained rather well supported in light of losses in broader risk assets, the technicals suggest the kiwi may be on the verge a substantial pullback as we outline in this report. That said the current proximity to our topside limit offer favorable risk-to-rewards on both short and medium-term trades.

A weekly chart offers a broader view of our current setup, highlighting the downward sloping trajectory in the NZDUSD off the July 2011 highs at 8842. Note that price action currently sits between the 52-week (green) and 13-week (blue) moving averages with the 23.6% Fibonacci extension taken from the February and June crests highlighting key weekly support at 7840. This level will be cited multiple times throughout this support as it confluences with Fibonacci levels on all three of our timeframes. 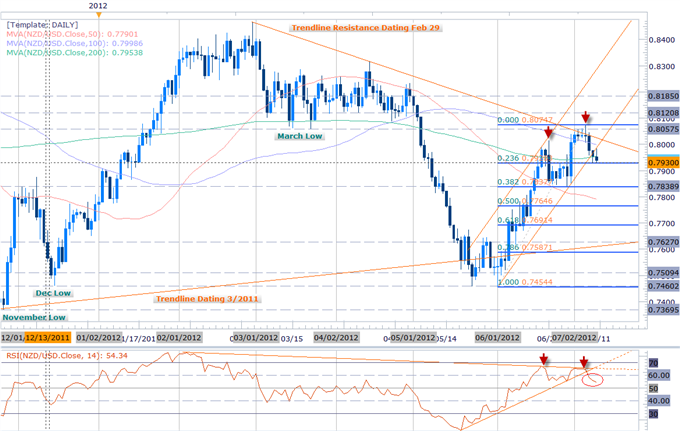 A look at the encompassing sees the NZDUSD recently breaking below channel support dating back to June 1st before encountering interim support at the 23.6% Fibonacci retracement taken from that run-up at 7930. A move below this level exposes subsequent daily support targets at the 38.2% extension at 7840 (confluence with the 23.6% weekly Fib extension). Note that RSI has complimented the channel break with divergence in price action suggesting an interim top me by in place at 8075. As such, we reserve this level as our topside limit which if compromised invalidates our directional bias. 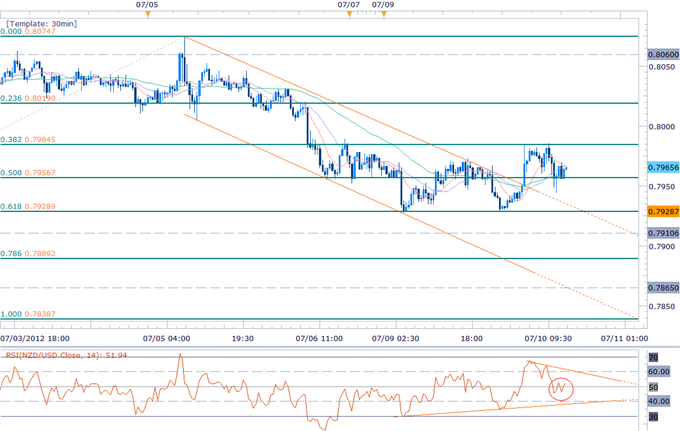 Interim resistance stands at the 38.2% retracement at 7985 backed by the 23.6% retracement at 8020 and 8060. A breach above the July high at 8080 shifts our focus higher with such a scenario eyeing topside targets at 8120 and the 61.8% Fibonacci extension taken from the June 1st and 28th troughs at 8185. A daily average true range of 81pips yields profit targets of 19-21 pips depending on entry. Should ATR pull back dramatically, adjust profit targets as needed to ensure more feasible scalps.

*Note the scalp will not be active until a confirmed break below 7955 or a rebound off 7985 or subsequent resistance level with RSI conviction. We will remain flexible with our bias with a break above our topside limit at 8080 eying topside targets.It’s extremely important in these market conditions to give added consideration regarding the timing of intra-day scalps with the opening ranges on a session & hourly basis offering further clarity.