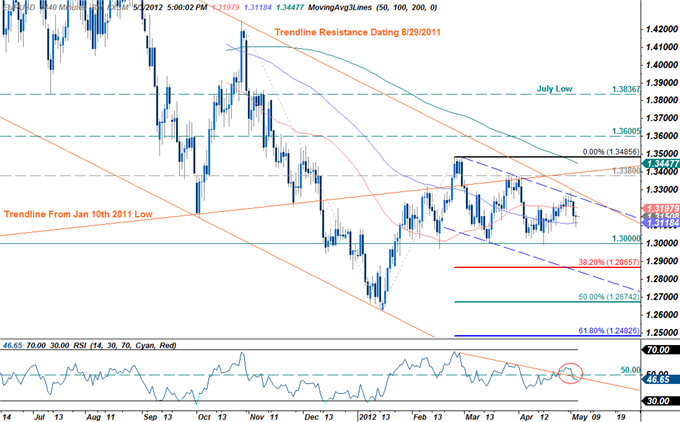 Employment in the world’s largest economy is projected to increase another 160K in April, and the faster pace of job growth may prop up the U.S. dollar as the development dampens expectations for additional monetary support. As the ongoing improvement in the labor market encourages an improved outlook for growth, we should see the Fed continue to scale back its dovish tone for monetary policy, and the central bank may start to discuss a tentative exit strategy as the more robust recovery raises the risk for inflation. The shift in the policy outlook certainly reinforces a bullish outlook for the USD, and the reserve currency should continue to recoup the losses from earlier this year as the FOMC moves away from its easing cycle.

Indeed, the resilience in private sector consumption bodes well for job growth, and a marked rise in hiring could ultimately push the EURUSD back down towards the 1.3000 figure as market participants scale back bets for QE3. On the other hand, the recent batch of data coming out of the U.S. economy certainly points to a soft jobs report amid the rise in job cuts paired with the slowdown in service-based activity, and we may see the FOMC keep the door open to expand monetary policy further amid the persistent slack within the private sector. In turn, a dismal outcome may lead the euro-dollar to retrace the decline from earlier this week, and the pair may threaten the downward trend from earlier this year as FX traders increase bets for another large-scale asset purchase program.

A look at the encompassing structure sees the EURUSD trading within the confines of a broad descending channel formation dating back to the August highs with the single currency rebounding off channel resistance of an embedded channel dating back to the February highs. Key daily resistance stands at the 1.33 figure with a breach above this level challenging the March highs at 13380 and the February highs at 1.3485. Daily support rests with the 100-day moving average at 1.3118 and the 1.30-figure. 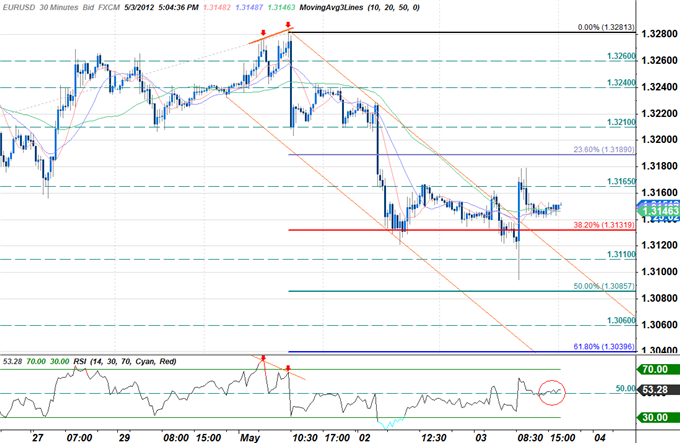 Clear bearish divergence in the relative strength index alluded to the euro’s decline yesterday with the single currency rebounding off the 38.2% Fibonacci extension taken from the March 27th and May 1st crests at 1.3130 before encountering soft resistance at 1.3165. Volatility on the back of today’s ECB interest rate decision saw whipsaw price action with the pair breaking above short-term channel resistance before failing to hold above the 1.3165 soft resistance target. Subsequent resistance levels are eyed at the 23.6% extension at 1.3190 backed by 1.3210, 1.3240 and 1.3260. A breach above the May 1st high at 1.3280 negates this specific setup with such a scenario eyeing targets above the 1.33-handle. Interim support remains with the 38.2% extension with support targets seen lower at 1.3110, the 50% extension at 1.3085 and 1.3060. The initial objective remains the 1.30 figure which has been met with sharp rebounds over the past three months each time the level has been tested. Should the print prompt a bullish dollar response look to target downside levels with a break below the 1.30-threshold offering further conviction on our directional bias.

As we’re expecting to see a faster rate of job growth, the data instills bullish outlook for the reserve currency, and the development may pave the way for a long U.S. dollar trade should it dampen speculation for more easing. Therefore, if NFPs increase 160K or greater in April, we will need to see a red, five-minute candle subsequent to the release to establish a sell entry on two-lots of EURUSD. Once these conditions are fulfilled, we will set the initial stop at the nearby swing high or a reasonable distance from the entry, and this risk will generate our first objective. The second target will be based on discretion, and we will move the stop on the second lot to cost once the first trade reaches its mark in order to preserve our profits.

On the other hand, the ongoing weakness in the real economy may continue to drag on hiring, and a dismal job print could spark a sharp selloff in the exchange rate as it raises the scope for additional monetary support. As a result, if the release falls short of market expectations, we will implement the same strategy for a long euro-dollar trade as the short position laid out above, just in the opposite direction. 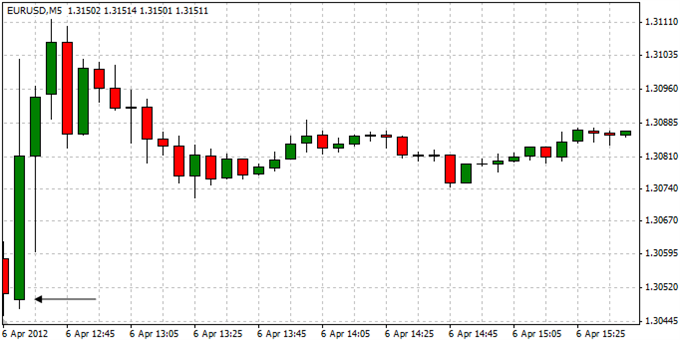 The world’s largest economy added 120K jobs in March following the 240K expansion in the previous month, while the jobless rate unexpectedly slipped to 8.2% from 8.3% during the same period as discouraged workers continued to leave the labor force. The slower rate of job growth dragged on the dollar, with the EURUSD pushing back above 1.3100, but we saw the pair consolidate during the North American trade to end the day at 1.3090.

To be added to David's e-mail distribution list, send an e-mail with subject line "Distribution List" to dsong@dailyfx.com