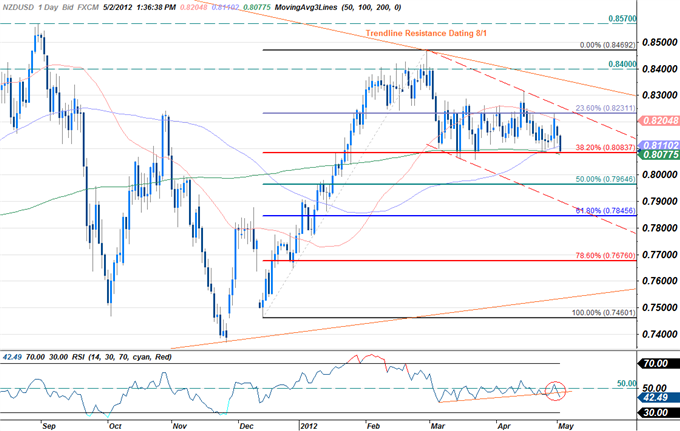 Employment in New Zealand is projected to increase another 0.4% in the first-quarter and the ongoing improvement in the labor market may prop up the New Zealand dollar as it reinforces an improved outlook for the region. However, as the Reserve Bank of New Zealand maintains a cautious tone for the region, another dismal print could trigger a sharp selloff in the exchange rate, and the high-yielding currency may threaten the range-bounce price action carried over from the previous month as the central bank shows an increased willingness to ease policy further. According to Credit Suisse overnight index swaps, market participants are starting to price a rate cut for the next 12-months, and a dismal labor report could spur increased bets for lower borrowing costs as the RBNZ aims to encourage a sustainable recovery.

The rise in business confidence paired with the expansion in private sector consumption certainly bodes well for the labor market, and a positive employment report could spark another run at 0.8300 as market participants scale back expectations for a rate cut. However, the downturn in global trade paired with the slowing recovery may drag on hiring, and the RBNZ may take additional steps to shore up the ailing economy as it aims to stem the risks surrounding the region. In turn, a dismal labor report could threaten the range-bound price action in the NZDUSD, and we may see the New Zealand dollar fall back towards the 78.6% Fibonacci retracement from the 2009 low to the 2011 high around 0.7990-0.8000 as market participants look for a rate cut.

A look at the encompassing structure sees the NZDUSD trading within the confines of a broad descending channel formation dating back to the February highs with the pair holding between the 23.6% and 38.2% Fibonacci retracements taken from the December advance at 8230 and 8080 respectively. The kiwi now looks to threaten key daily support at the confluence of the 38.2% retracement and the 200-day moving average at 8080. A break below this level risks substantial losses for the kiwi with subsequent daily support targets eyed at the 50% retracement at 7965 and the confluence of channel support and the 61.8% retracement at 7845. 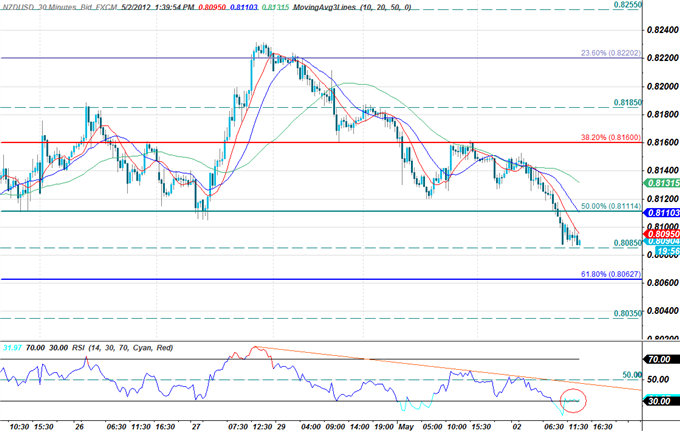 The scalp chart shows the pair holding just above soft support at 8085 with a close below 8080 eyeing intra-day scalp targets at the 61.8% Fibonacci extension taken from the February and April highs at 8060, 8035, and the 78.6% extension just below the 80-figure. Interim resistance stands with the 50% extension at 8110 backed by the 38.2% extension at 8160 and 8185. While our medium-term bias remains neutral as we hold this range, it’s important to note that the 8080 support level remains paramount with a break below this level offering further conviction on our directional bias. Should the data prompt a bullish response, look to target topside levels with only a breach above 8230 shifting our focus higher.

Expectations for a faster rate of job growth instills a bullish outlook for the kiwi, and the development could pave the way for a long New Zealand dollar trade as it encourages an improved outlook for the region. Therefore, if employment increases 0.4% or greater in the first-quarter, we will need to see a green, five-minute candle following the release to generate a buy entry on two-lots of NZDUSD. Once these conditions are met, we will set the initial stop at the nearby swing low or a reasonable distance from the entry, and this risk will establish our first objective. The second target will be based on discretion, and we will move the stop on the second lot to cost once the first trade hits its mark in an effort to lock-in our winnings.

On the other hand, the weakening trade conditions paired with the slower rate of growth may drag on the labor market, and a dismal jobs report could fuel expectations for lower borrowing costs as the central bank aims to encourage a sustainable recovery. As a result, if the figure falls short of market expectations, we will implement the same strategy for a short kiwi-dollar trade as the long position laid out above, just in reverse.

New Zealand employment increased 0.1% in the fourth quarter after expanding 0.2% during the three-months through September, while the jobless rate slipped to 6.3% from 6.6% during the same period as discouraged workers left the labor force. Indeed, the dismal print dragged on the New Zealand dollar, with the NZDUSD quickly falling back below 0.8350, and the high-yielding currency held the losses throughout the day as the pair ended the day at 0.8338.