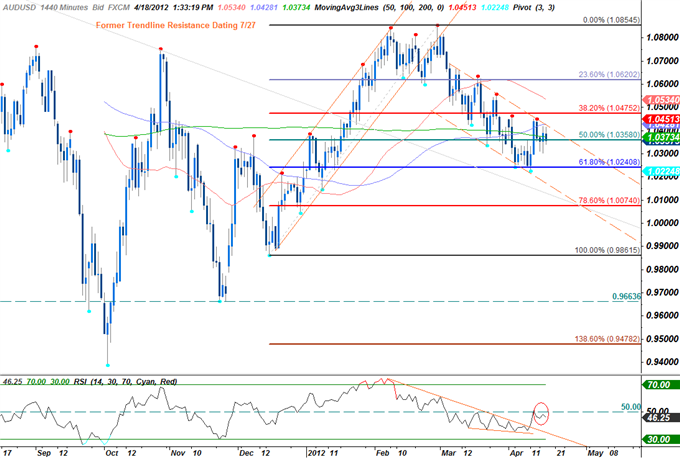 We have continued to aggressively scalp downside targets in the AUD/USD with the recent run-up offering favorable positioning on shorts. While the decline off the February highs has been one of magnitude, the gradual slope of the decline bodes well for further aussie losses and is constructive for a bear market with a ‘panic’ decline (sharp sell-off) solidifying our bearish bias. As noted in Jamie Saettele’s weekly technical forecast, “A panic style decline right off the top is not to be trusted.”

A look at the encompassing structure sees the aussie trading within the confines of a well-defined descending channel formation dating back to March 6th with the pair holding just above the 50% Fibonacci retracement taken from the December 15th advance at 1.0358. Topside advances are governed by the confluence of channel resistance and the 100-day moving average at 1.0430 with a breach above critical resistance at the April high at 1.0465 negating our medium-term bearish bias on the aussie. The initial daily objective is eyed at the 61.8% retracement at 1.0240. 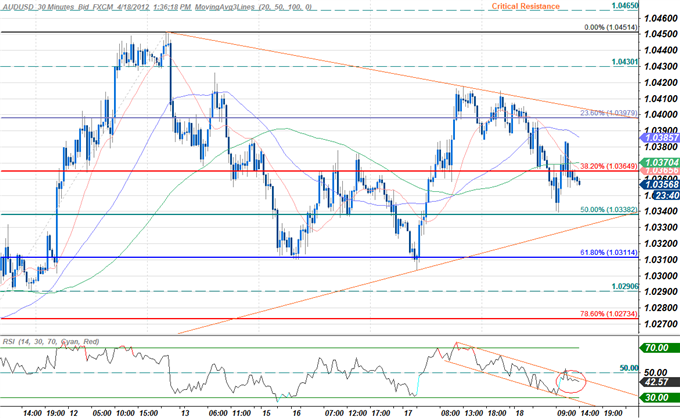 Our scalp chart shows the AUD/USD continuing to trade within the confined of a wedge formation with the pair holding just below interim resistance at the 38.2% Fibonacci retracement taken form the April 10th advance at 1.0365. Initial support stands at the confluence of trendline support and the 50% retracement at 1.0340 with a break here eyeing subsequent floors at the 61.8% retracement at 1.0310, 1.0290, the 78.6% retracement at 1.0275 and 1.0250. A break below our bottom limit at the 100% retracement at 1.0225 offers further conviction on our directional bias with such a scenario eyeing extended targets at the 1.02-figure and 1.0175.

Interim resistance stands at 1.0365 backed closely by our topside limit at the 23.6% retracement at the 1.04-handle. If this level is compromised look for the aussie to test the April high at 1.0465 with a breach here negating our bias, eyeing extended break targets at the 1.05-figure and the 50-day moving average at 1.0530. A daily average true range of 98.13 yields profit targets of 21-23 pips depending on entry. Should ATR pull back dramatically, adjust profit targets as needed to ensure more feasible scalps.

*Note the scalp will not be active until a confirmed break below 1.0340 or a rebound off 1.0365 or subsequent resistance level with RSI conviction. We will remain flexible with our bias with a break above our topside limit at the 1.04-handle eying topside targets.

Join Michael on Thursday morning for a Live Scalping Webinar at 1230GMT (8:30ET) to cover this scalp and more.