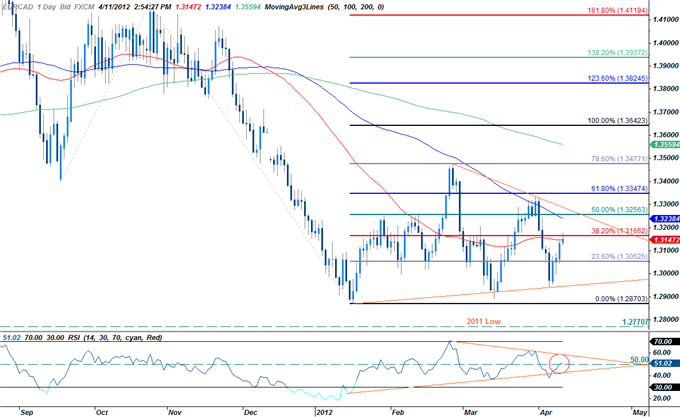 While the majors have offered precision scalp targets over the past few sessions, the current setup identified on the EURCAD offers a more favorable risk/reward ratio as the exchange rate now trades just below key daily resistance. The proximity to both our topside & bottom limits offers ideal positioning with price action over the next 24hours likely to offer further conviction on a directional bias. Note that our long-term outlook on the EURCAD remains weighted to the topside as we anticipate the Bank of Canada to carry the 1% interest rate into 2013.

A look at the encompassing structure of the EURCAD sees the pair continuing to consolidate within the confines of a wedge formation dating back to the 2012 lows made early in the year with the pair testing key daily resistance at the 38.2% Fibonacci extension taken from the September 19th and January 17th troughs at 1.3165. We reserve this level as our topside limit which if breached offers further conviction on long scalps with key daily resistance targets seen a the 100-day moving average at 1.3240 and the 50% extension just higher at 1.3255. While daily support rests lower with the 23.6% extension at 1.3050, a shorter-term channel formation offers a clear bottom-limit which if compromised will offer short scalp targets as we look to play the downside correction of the recent rally. Note that daily RSI looks poised for a break above 50 with a breach above trendline resistance offering clarity on our interim bias. 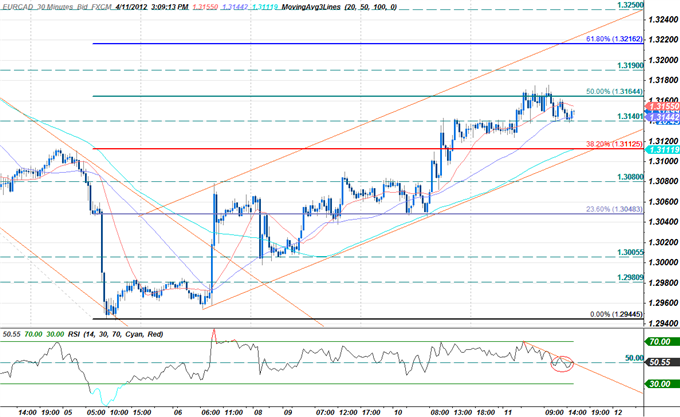 Interim support rests at 1.3140 and is backed by out bottom limit at the 38.2% extension at 1.3115. A break below this level negates our short-term bias with such a scenario targeting 1.3080 and the 23.6% extension at 1.3050. Again we note that the daily chart highlights this level as our daily support target which if compromised eyes extended targets at 1.3005, and 1.2980. A daily average true range of 97.79 yields profit targets of 22-24 pips depending on entry. Should ATR pull back dramatically, adjust profit targets as needed to ensure more feasible scalps.

*Note the scalp will not be active until a confirmed break above 1.3165 or a rebound off 1.3140 or subsequent support level with RSI conviction. We will remain flexible with our bias with a break below our bottom limit at 1.3115 eying downside targets.

Join Michael on Thursday morning for a Live Scalping Webinar at 1230GMT (8:30ET) to cover this scalp and more.