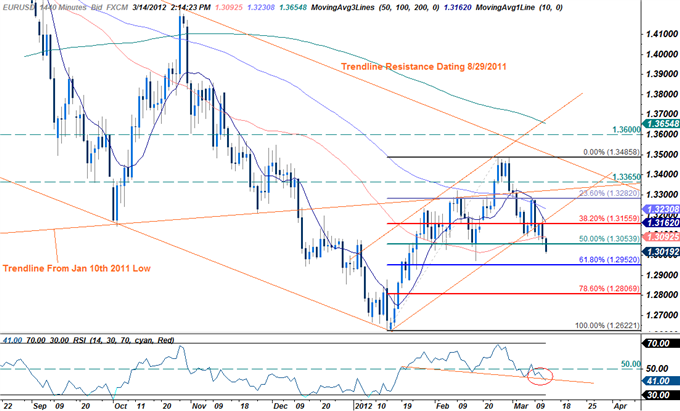 With the pickup in volatility over the past few days, we thought it prudent to offer these scalp setups on the EURUSD and the EURCAD. While the single currency has been called lower for months, only now does the technical setup offer ideal scalp opportunities with yesterday’s FOMC statement providing further support for the dollar as calls for QE quickly subside. The proximity to our pivot levels (points at which our directional bias is negated) on both of these setups offers favorable risk to reward ratios as we attempt to play further weakness in the EURUSD and a correctional rebound in the EURCAD.

A daily chart of the euro shows the single currency breaking below the 50-day moving average and Fibonacci support at the 50% retracement taken from the January 16th advance at 1.3054. This completes a head and shoulders pattern and suggests a key reversal for the euro. Note that the daily relative strength index has yet to break below RSI support dating back to January 19th and a close below this trendline offers further conviction on our directional bias. 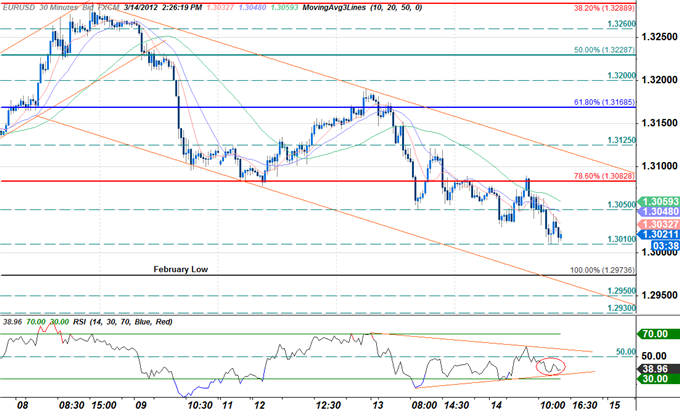 The euro has continued to trade within the confines of a descending channel formation dating back to the March 8th highs with the single currency resting on interim support at 1.3010 ahead of the close in New York. A break below this level puts our setup into play with subsequent support targets eyed at the February low at 1.2973 and would represent at 100% retracement of the February 16th advanced. As such, we reserve this level as our bottom limit with a break here eying subsequent floors at 1.2950, 1.2930, and 1.2905. Stronger support is seen lower at 1.2875.

*Note that the scalp will not be active until a break below 1.3010 or a rebound off 1.3050 or subsequent resistance level with RSI conviction. We will remain flexible with our bias with a move passed our topside limit at 1.3125 eyeing topside targets. 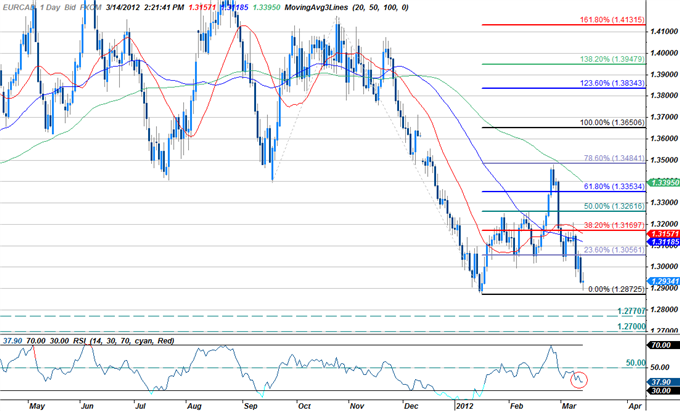 The daily EURCAD chart highlights key support at the January lows at 1.2873 and we reserve this level as our bottom limit with a break below risking substantial losses for the euro. Such a scenario eyes subsequent daily targets at the 2011 low at 1.2770 and the 1.27-figure. Although our medium-term bias on the pair remains weighted to the downside, the recent drawdown offers opportunities to scalp a corrective pullback off he January lows before heading lower. From a fundamental standpoint, the loonie has remained rather resilient in the face of broad-based dollar strength and pressure on the commodity bloc. Still, should the loonie begin to catch up to its counterparts, look for the EURCAD pair to move higher in the interim. 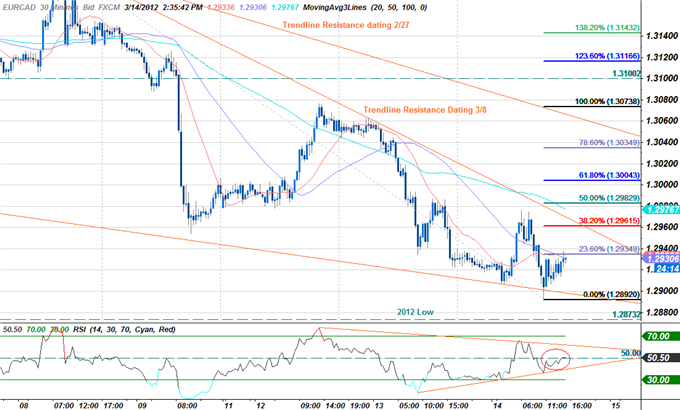 Interim support rests with the New York session lows at 1.2892 with our bottom limit held just below at the 2012 lows at 1.2873. A break below this level negates our short-term bias with such a scenario eyeing subsequent floors at 1.2830 and the 2011 lows at 1.2770. A 30min average true range of 20.5 yields profit targets of 16-18 pips depending on entry. Should ATR pull back dramatically, adjust profit targets as needed to ensure more feasible scalps.

*Note that the scalp will not be active until a break above 1.2935 or a rebound off 1.2892 or subsequent support level with RSI conviction. We will remain flexible with our bias with a move below our bottom limit at 1.2873 eyeing downside targets.

Join Michael on Tuesday morning for a Live Scalping Webinar at 1230GMT (8:30ET) to cover these scalps and more.