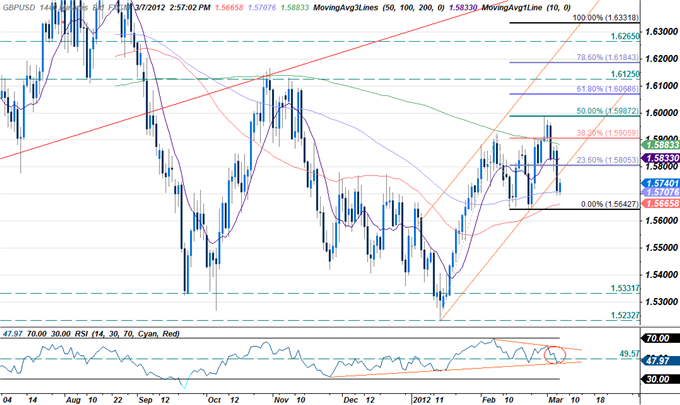 With multiple central bank interest rate decisions on tap, here are setups to watch for as we head into the print. Although the BoE, ECB, and BoC are widely expected to hold their respective benchmark rates, the accompanying statements could fuel further volatility as the central banks disseminate their outlook on growth prospects and future monetary policy. Although our medium-term bias on the pound and the Canadian dollar remains bearish (bullish USDCAD), we reckon that tomorrow’s print could spark larger moves against our directional bias and as such we will remain flexible in order to take advantage of the volatility that follows.

A daily chart of the GBPUSD shows the pair breaking below channel support dating back to the January 13th lows with the pair currently resting on the 100-day moving average at 1.5740. Note that the daily relative strength index remains poised to break below RSI support dating back to the November 25th with such a scenario likely to fuel the pair with enough momentum to test the February lows at 1.5643. We reserve this level as our bottom limit with a break here risking substantial losses for the pound. Our topside limit rests with the 23.6% Fibonacci extension taken from the January and February lows at 1.5805. 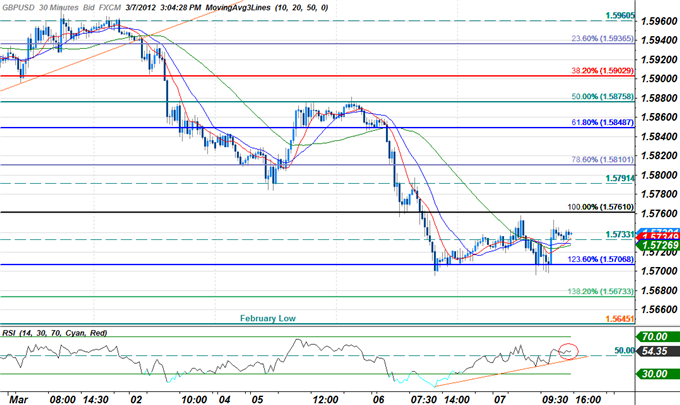 The sterling has continued to trade within a tight range ahead of the BoE interest rate decision tomorrow morning with interim support holding at the 123.6% Fibonacci extension taken from the February 20th and 29th crests at 1.5706. A break here puts our setup into play with subsequent support targets seen at the 138.2% extension at 1.5673 and the February low at 1.5643. Extended targets eye floors at the 161.8% extension at 1.5620 and the 178.6% extension at 1.5580.

Interim resistance now stands at the 100% extension at 1.5760 backed by soft support at 1.5790 and the 78.6% extension at 1.5810. A breach above this level negates the bearish tone on the pound with such a scenario eyeing subsequent topside targets at the 61.8% extension at 1.5848, 1.5875, and the 38.2% extension just above the 1.59-handle. An hourly average true range of 21 yields profit targets of 18-20 pips depending on entry. Should ATR pull back dramatically, adjust profit targets as needed to ensure more feasible scalps.

*Note that the scalp will not be active until a break below 1.5733 or a rebound off 1.5760 or subsequent resistance level with RSI conviction. We will remain flexible with our bias ahead of the interest rate releases with a move passed our topside limit at 1.5810 eyeing topside targets. Traders are recommended to be flat going into the print until such time when clear market direction has been identified. 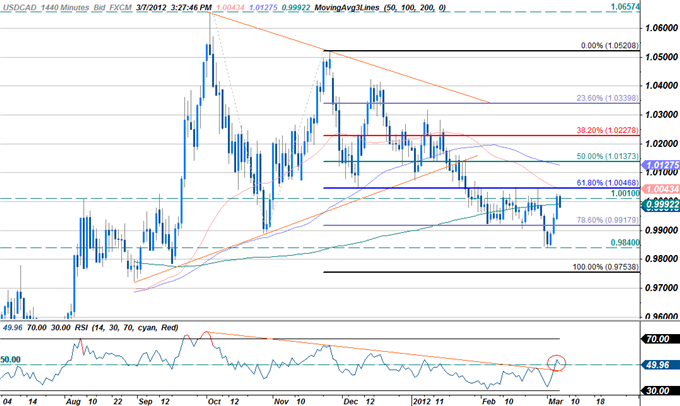 The daily USDCAD chart highlights key resistance at the 61.8% Fibonacci extension taken from the October 4th and November 25th crests at 1.0046. This level has continued to limit topside moves in the pair since late January and will serve as our topside limit on this setup. Although our medium-term bias on the USDCAD remains weighted to the topside, there is room for pullback of some magnitude after posting its largest three-day rally since January 4th when the pair advanced 1.7% over the subsequent two sessions. 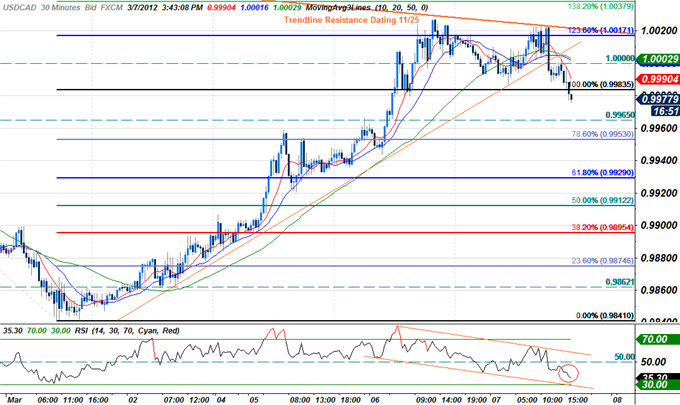 The loonie broke below short-term trendline support today after encountering resistance at longer-term trendline resistance dating back to the November 25th crests just above the 123.6% Fibonacci extension taken form the February 20th and March 1st troughs at 1.0017. A breach above this level offers further conviction on our bias with a break above our topside limit at 1.0040 putting subsequent topside targets in play.

Interim support rests at 9965 backed by the 78.6% extension at 9953 and our bottom limit at 9930. A break below this level negates our interim bullish bias with such a scenario eyeing subsequent extended targets at 9912, the 38.2% extension at 9895 and the 23.6% extension at 9875. A 2- hourly average true range of 17.25 yields profit targets of just 14-16 pips depending on entry. Note that with the hourly ATR yielding just 11pips we opted to look at the two hour and targets may take longer to attain. Now, normally we would steer away from such pairs, but in light of the major event risks on tap over the next few days we thought it appropriate to release this setup.

*Note that the scalp will not be active until a break above 9984 or a rebound off 9965 or subsequent support level with RSI conviction. We will remain flexible with our bias ahead of the interest rate releases with a move below our bottom limit at 9930 eyeing downside targets. Traders are recommended to be flat going into the print until such time when clear market direction has been identified.

For complete scalp targets on the EURUSD refer to today’s Trading the News Report.