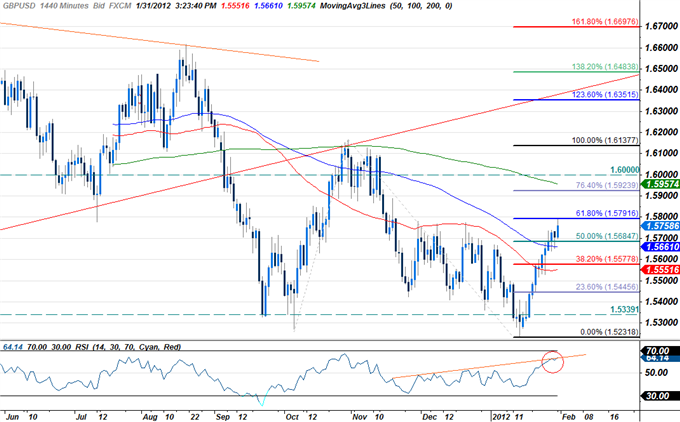 The sterling has posted an impressive rally this month with the pair higher by more than 1.4% year to date after advancing eleven out of the past twelve sessions. While such a rally impulsively begs to be faded, our bearish bias remains rooted in the fundamentals. While the UK is expected to skirt a “mild recession” in the broader euro-zone area, growth in the domestic economy remains sluggish at best with the Bank of England widely expected to implement further easing by expanding its current £275 billion asset purchase program. With the unemployment rate up ticking to 8.4% in November and continued concerns about possibly undershooting the 2% inflation target, the pound is likely to come under pressure with Credit Suisse overnight swaps factoring in more than 9 basis points in interest rate cuts over the next twelve months. Accordingly our bias remains weighted to the downside with this month’s rally offering optimal entry for shorts against the sterling. As seasonality trends dictate, we expect for this decline to accelerate as we head into February.

A daily chart of the sterling shows the pairs’ advance off the 1.5230 lows seen earlier in the month, with topside moves now being limited by the 61.8% Fibonacci extension taken from the October 6th and February 13th troughs at 1.5790. We reserve this level as our topside limit with a break above negating our interim bearish bias. Note that the daily relative strength index has continued to test RSI resistance dating back to the November 18th peak with a break here likely to fuel the pound with enough momentum to breach above our topside limit. 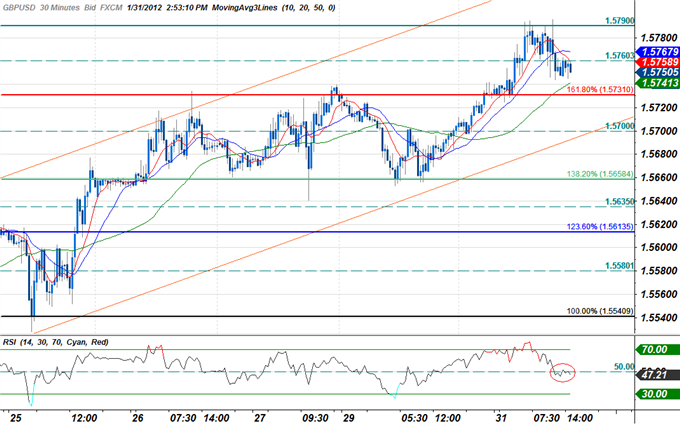 The GBP/USD has continued to trade within the confines of an ascending channel formation dating back to the January 13th low. Full conviction on our scalp does not come into play until this formation is compromised with a break below channel support risking substantial losses for the sterling. Interim support targets are held at the 161.8% Fibonacci extension at 1.5730, the 1.57-figure, the 138.2% extension at 1.5660, and 1.5635. A move below our bottom limit at the 123.6% extension at 1.5615 provides further conviction with subsequent support profit targets eyed at 1.5580 and the 100% extension at 1.5540.

A break back above soft resistance at 1.5760 eyes our topside limit at 1.5790. A breach above this level negates our short-term bias with such a scenario eyeing topside targets at 1.5820 and the 200% extension at 1.5845. An hourly average true range of 25.81 yields profit targets of 19-22 pips depending on entry. Should ATR pull back dramatically, adjust profit targets as needed to ensure more feasible scalps.

*Note that the scalp will not be active until a break below channel support or a rebound off 1.5760 or subsequent resistance level with RSI conviction. We will remain flexible with our bias with a move passed our topside limit at 1.5790 eyeing topside targets.

The economic docket for tomorrow sees January nationwide house prices and manufacturing PMI data on tap. House prices are expected to remain subdued with consensus estimates calling for prices to continue declining at pace of -0.2% m/m, while the year on year print is expected to slightly improve to 1.2% from a previous print of 1.0% y/y. Contraction in the manufacturing sector is widely expected to have halted this month, with estimates calling for a flat PMI print of 50. The data would mark the first month manufacturing has not contracted since September when the report yielded a print of 50.8. While stronger prints here could possibly provide some support for the sterling, it’s unlikely to see much follow through as UK data continues suggest that the economy remains on shaky ground with anemic growth expected in 2012. That said, traders should be mindful of the releases and avoid holding scalps through the data print.