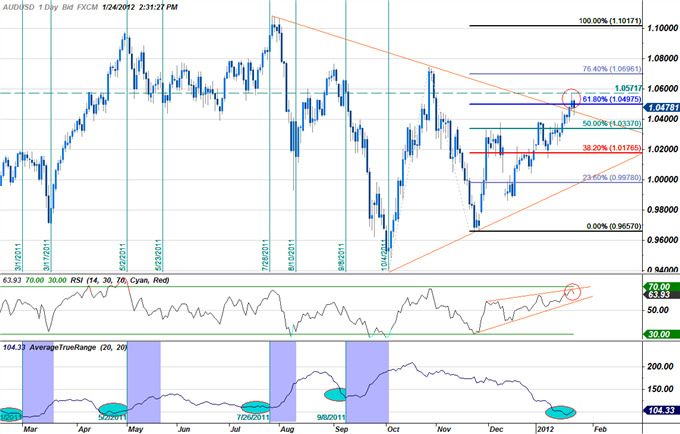 Is It Time to Sell? New AUDUSD Scalp

The recent rally in risk has come as a surprise to many amid ongoing concerns about the Euro-zone debt crisis with risk currencies posting substantial gains since the start of 2012. We continue to focus our attention on the Australian dollar which has already surged 3.76% year-to-date and continues to track broader risk trends (although recently the correlation has started to breakdown). Although the rally could last until the end of the month, the technical outlook suggests that the high yielding currency may have put in an interim top, opening the door for downside plays on our aussie scalp setup.

A daily chart of the Australian dollar does show cause for further topside moves after breaching trendline resistance dating back to the record highs seen on July 27th and the 61.8% extension taken from the October 4th and November 23rd troughs at the 1.05-figure. Yet a closer examination of the aussie reveals the threat of a substantial downside correction when we take into account the pair’s daily average true range. Although ATR does not provide a directional bias, a look at historical data suggests that the aussie may be putting in an interim top at these levels. Note that we have not seen daily ATR at such low levels since May when the aussie came off sharply from the highs at 1.1011. Subsequent up-swings in ATR off extreme lows (highlighted in purple) have often complimented correctional pullbacks with the phenomena seen again in late July and early September. While this cannot guarantee that an interim top is in place, it provides further evidence that the recent topside breach may be a false break. That being said, a breach above soft resistance at 1.0570 negates our short-term bearish bias. 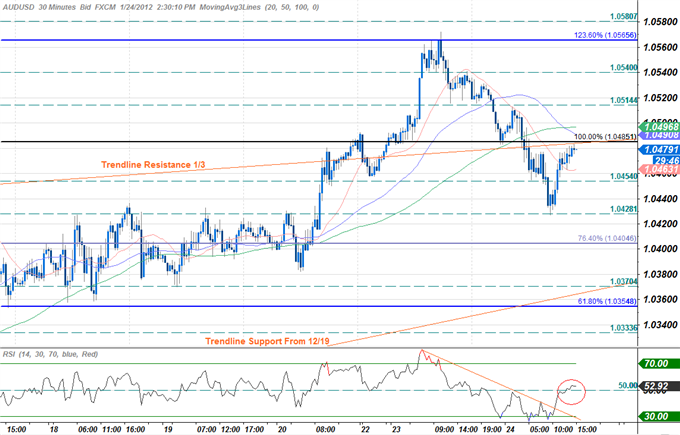 The AUD/USD rebounded sharply off the 123.6% Fibonacci extension taken from the December 29th and January 8th toughs at 1.0565 yesterday before breaking back below the 100% extension at 1.0485. Note that this Fibonacci level converges with former trendline resistance dating back to January 3rd and is likely to cap topside moves in the interim. Support target profits are eyed at 1.0454, 1.0428, and the 76.4% extension at 1.0405. A break below the bottom limit at the convergence of soft support at 1.0370 and trendline support dating back to December 19th risks accelerated losses for the aussie with extended break targets eyed at the 61.8% extension at 1.0355, 1.0333, and the 50% extension at1.0315.

*Note that the scalp will not be active until a break below 1.0454 or a rebound off 1.0485 or subsequent resistance level with RSI conviction. We will remain flexible with our bias with a move passed our topside limit at 1.0565 eyeing topside targets.

The economic docket for tomorrow sees key inflation data on tap out of Australia and the much anticipated FOMC interest rate announcement. The headline 4Q CPI figure is expected to show the pace of price growth easing to 3.3% y/y from a previous read of 3.5% y/y. The data is likely to fuel further weakness in the aussie as the print could prompt the RBA to further reduce borrowing costs with interest rate expectations continuing to call for additional cuts from the central bank. However the core inflation read is expected to tick higher to 2.4% y/y from 2.3% y/y and the stickiness in price growth may limit the RBA’s scope to cut rates further as temporary factors continue to filter into the real economy. That said, traders should be mindful of the release and avoid holding scalps through the data print.

The US offers its own event risk on the pair with the FOMC interest rate decision tomorrow afternoon. Although the Fed is certain to hold rates at 0.25%, investors will be eyeing the interest rate forecasts provided by the voting members for the first time. The move is an effort by the central bank to provide further transparency to markets as each member will be able to provide his/her own projections for interest rates. In addition to the rate expectations, market participants continue to eye calls for additional quantitative easing. With the newly minted central banks doves Sandra Pianalto, Dennis Lockhart, and John Williams joining the committee, the Fed may show an increased willingness to further shield the economy and members may talk up speculation for additional easing in an effort to stem the threat of further deterioration in Europe. With economic data continuing to improve, we find calls for further easing unwarranted at this time. However, should the Fed’s policy statement hint to further easing measures, look for the dollar to come under pressure with such a scenario negating our interim bearish bias on the aussie.