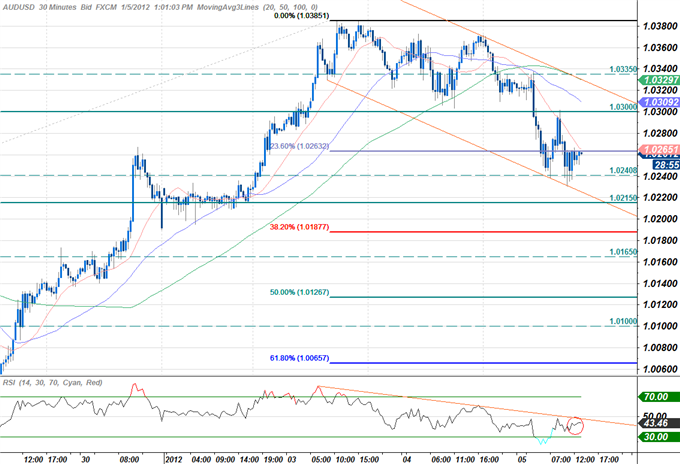 The start of the week saw risk assets outperform as US data continues to top estimates with stocks and higher yielding assets advancing across the board. The situation in Europe has continued to deteriorate however with remarks made by senior officials suggesting that the Germans remain steadfast in their opposition to expanding the European bail-out fund. While the euro trade remains increasingly crowded, we will attempt to focus on the highest yielding currency among the majors as gauge of broader markets sentiment. Although there are numerous scalps we are currently watching, the Australian dollar remains our setup of choice as we look for the aussie to pare the 1.75% advance seen in the first three trading sessions of 2012.

The AUD/USD has continued to trade within the confines of a descending channel formation dating back to January third when the aussie peaked at near two month highs around 1.0385. Note that the relative strength index continues to hold below RSI trendline resistance with a breach above likely to put our setup on hold for some time. Support profit targets are eyed at 1.0240 backed by 1.0215, the 38.2% Fibonacci extension taken from the December 8th and January 3rd crests at 1.0188, and 1.0165. A break below our bottom limit at 1.0129 risks substantial losses for the aussie with subsequent targets held at the 50% extension at 1.0129, the 1.01-figure, and the 61.8% extension at 1.0065.

Interim resistance stands at the 23.6% extension at 1.0263 with subsequent ceilings eyed higher at the 1.03-handle, and 1.0335. A breach here negates our short-term bias with such a scenario eyeing resistance targets at the 2012 high at 1.0385 and 1.0425.An hourly average true range of 27.39 yields profit targets of 21-24 pips depending on entry. Should ATR pull back dramatically, adjust profit targets as needed to ensure more feasible scalps.

*Note that since this article was written the aussie has breached our initial topside resistance target. That said, the scalp will not be active until a break back below the 23.6% ext at 1.0263 or a rebound off the 1.03-figure or subsequent resistance level with RSI conviction. We will remain flexible with our bias with a move passed our topside limit at 1.0335 eyeing subsequent topside targets.

With no data on tap for Australia for the remainder of the week we highlight the much anticipated non-farm payroll report on tap for tomorrow. Consensus estimates call for a print of 155K for the month of December, up from a previous gain of 120K. With today’s ADP employment report crushing estimates with a print of 325K, expectations for a strong NFP report continue to take root. As I mentioned in previous reports this week, we look for the greenback to decouple from its negative correlation with equity markets later this year. As it stands however, a strong print tomorrow could fuel a rally in risk with such a scenario likely to see the aussie move against our bias.