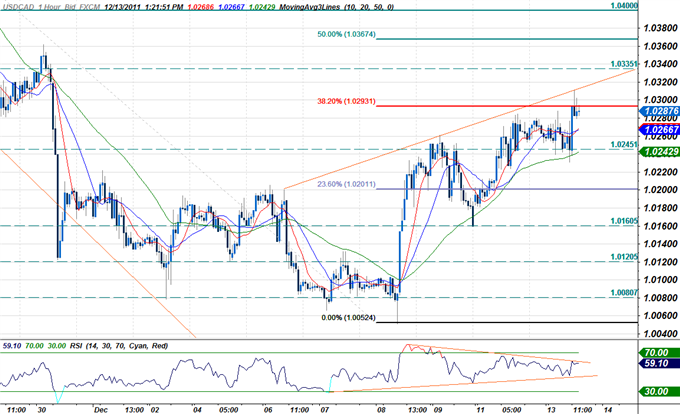 Although we’ve been calling for loonie weakness for some time now, we could not advocate taking long scalps amid last week’s rally with Thursday’s sharp rebound off monthly lows offering proper justification for fresh Fibonacci extension using the October 27th and December 8th troughs. With the dollar advancing across the board this week and renewed concerns about the European sovereign debt crisis taking root, the commodity currency is likely to come under pressure with our medium-term bias on the USD/CAD weighted to the topside. Further supporting to our bias was the FOMC interest rate decision today where the central bank reiterated that rates are to stay near record lows through mid-2013 as “Strains in global financial markets continue to pose significant downside risks to the economic outlook.” While the Fed will continue with “operation twist,” talks of further quantitative easing has all but diminished as economic data out of the world’s largest economy continue to improve. Accordingly the reserve currency is likely to remain well supported as the threat of further dollar diluting measures from the central bank subsides.

Interim support holds at 1.0245 with subsequent floors seen at the 23.6% extension at the 1.02-handle and 1.0160. A break here negates our short-term bias with such a scenario eyeing subsequent floors at 1.0120, and 1.0080.An hourly average true range of 31.73 yields profit targets of 24-27 pips depending on entry. Should ATR pull back dramatically, adjust profit targets as needed to ensure more feasible scalps.

*Note that the scalp will not be active until a break below the 1.03-figure or a rebound off 1.0245 or subsequent support level with RSI conviction. We will remain flexible with our bias with a move passed the bottom limit at 1.0160 eyeing downside targets.

Event risk on the pair is limited overnight with the November leading indicators and October manufacturing shipments on tap. Leading indicators are expected to have improved last month with consensus estimates calling for a print of 0.4% m/m, up from a previous print of 0.2% m/m. Shipments will also be closely eyed by traders with estimates calling for a decline of 0.6% after a previous gain of 2.6% in September. Notwithstanding a significant miss on the data, the reports are unlikely to spark much volatility as traders remain fixate on further developments out of Europe. Should broader risk sentiment shift to extremely bullish (IE equities and Treasury yields rally sharply), look for the pair to come off with such a scenario eyeing downside targets.