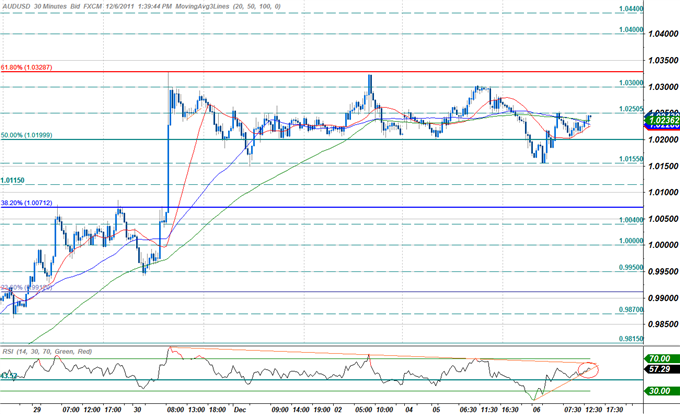 With massive event risk just over the horizon, markets have continued to trot along with little conviction ahead of the ECB rate decision on Thursday and the EU summit on Friday. A steady stream of headlines out of Europe and threats of sovereign downgrades on the EU nations have fueled ongoing concerns regarding the sustainability of the Euro-project and in turn investors remain cautious ahead of key events later this week, culminating with the EU summit. Our medium to long-term bias on risk remains weighted to the downside as the fundamental outlook remains intact. However with such sensitivity to European headlines, the possibility for further topside moves cannot be ruled out. Here are the scalp setups I am currently trading.

The RBA cut interest rates last night as expected with central bank Governor Glenn Stevens citing that “Financial conditions have become much more difficult, especially in Europe. This, together with precautionary behavior by firms and households, means that the likelihood of a further material slowing in global growth has increased.” The most notable remark made by the Governor was regarding the situation in China with Stevens noting that, “China’s growth has been slowing. Trade in Asia is now seeing some effects of a significant slowing in economic activity in Europe.”

The statement was the first time that the central bank has acknowledged the threat of a slowdown in Asia’s powerhouse and suggests that Australian officials continue to see a risk to the economy should conditions in China continue to deteriorate. The increasingly dovish outlook leaves the door open for further easing from the RBA with Credit Suisse overnight swaps now factoring a 116% chance of another 25 basis point cut next month which would mark the third rate cut in three months from the central bank.

A breech above interim resistance at the 1.0250 level eyes targets at the 1.03-figure, backed by our topside limit at the 61.8% retracement at 1.0330. A break here negates our short-term bias with such a scenario eyeing subsequent ceilings at the 1.04-handle, 1.0440, and the 76.4% retracement at 1.0485. An hourly average true range of 27.04 yields profit targets of 22-25 pips depending on entry. Should ATR pull back dramatically, adjust profit targets as needed to ensure more feasible scalps.

*Note that the scalp will not be active until a break below the 1.02-figure or a rebound off 1.0250 or subsequent resistance level with RSI conviction. We will remain flexible with our bias with a move passed the topside limit at 1.0330 eyeing topside targets.

Event risk on the pair mounts overnight highlighted by the 3Q GDP print. Consensus estimates call a year on year print of 1.9%, up from 1.4%, while the quarter on quarter print is expected to slide to 0.8% from 1.2%. A weaker than expected print here would likely weigh heavily on the aussie as the data would echo concerns cited by RBA Governor Stevens last night with longer term targets for the aussie eyed at the 99-figure. 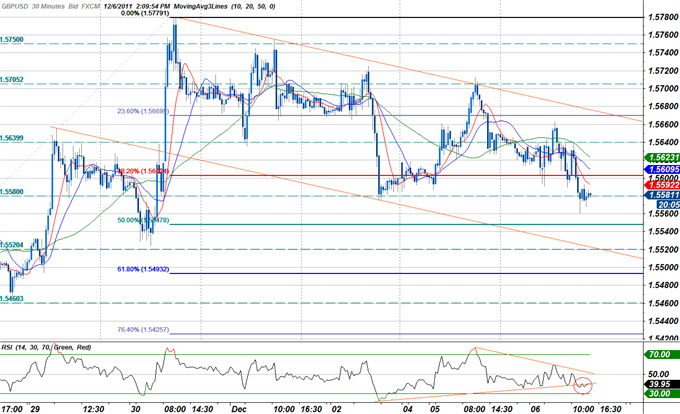 A fresh setup on the sterling reveals optimal scalp targets as the GBP/USD continues to trade within the confines of a descending channel formation. Last week Chancellor of the Exchequer George Osborn announced a £40 billion program to ensure free flowing liquidity to small businesses in response to ongoing concerns of a looming credit crunch. Although the move aims to support the real economy, many have questioned whether the program will derail the government’s austerity plan as sovereign deficits remain an underlying market theme in light of the European crisis.

With the BoE rate decision on tap later this week, the pound could see strong headwinds as we head into the print, with our bias remaining weighted to the downside. Support profit targets are eyed at the 50% Fibonacci extension taken from the November 18th and 30th crests at 1.5550, with subsequent floors seen at 1.5520, the 61.8% extension at 1.5495, and our bottom limit at 1.5460. A break here risks further losses for the pound with break targets held at the 76.4% extension at 1.5425 and the 1.54-handle.

Interim resistance stands at the 38.2% extension at 1.56-figure backed by 1.5640 and the 23.6% extension at 1.5670. A break above this level negates our short-term bias with such a scenario eyeing subsequent targets at the 1.57-handle, 1.5750, and last week’s high at 1.5780. An hourly average true range of 31.73 yields profit targets of 27-27 pips depending on entry. Should ATR pull back dramatically, adjust profit targets as needed to ensure more feasible scalps.

*Note that short-scalps will not be active until a break below the 50% extension at 1.5550 or a rebound off the 1.56-figure or subsequent resistance level with RSI conviction. We will remain flexible with our bias with a move above our topside limit at 1.5670 eyeing topside targets.

Event risk for the sterling comes in to play tomorrow morning with industrial production, manufacturing production, and the NIESR GDP estimate on tap. Both production and manufacturing are expected to have slowed in October with a weaker than expected print here likely to trigger further downside moves in the pound. Traders will also be eyeing the GDP estimate later in the day for a snapshot into growth prospects for the UK. Again here we note that a disappointing read would likely see expectations for further easing from the Bank of England rise and accordingly the sterling may yet face further downside pressures. It’s worth noting that if tomorrow’s data comes in at consensus, the pound may find some solace, with a breach above our topside limit eying subsequent resistance levels.