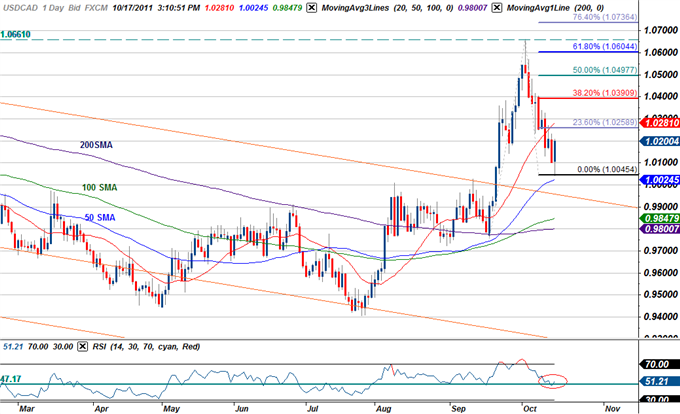 Last week’s sharp rally in risk slammed the greenback with the USD/CAD plummeting from recent thirteen month highs around 1.0660. The pair found support some 600pips lower just above parity before the greenback mounted its assault today in US trade. We eye the 23.6% Fibonacci extension taken from the September 19th trough and today’s lows as our primary target at 1.0260 which if breached gives the green light for further dollar advances. Note that daily relative strength also looks to rebound off support at the 47-mark, with an upward slope offering further support for our bias.

With the G20 meeting failing to calm investors about the ongoing debt saga in Europe, investors have gone on the defensive with growth backed ‘risk’ currencies like the aussie, the kiwi, and the loonie coming under pressure early in the week. Accordingly our bias on this particular scalp setup will be weighted to the topside as the dollar pares some of the steep declines seen last week. Note that after today’s 1.35% advance, the pair may experience a brief pullback before moving on to higher highs. 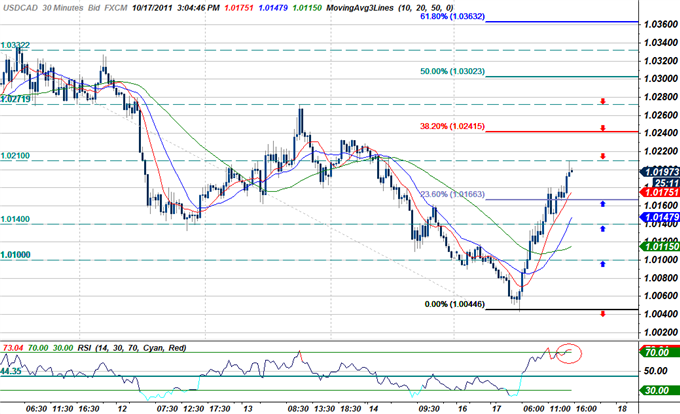 With a 1-hour average true range of 27.27 profit targets on said scalp should remain between 21-26 pips depending on entry. We reckon a break below the bottom limit at 1.0045 negates the bias with such a scenario downside targets at the parity and 0.9950.

*Note the scalp will not be active until a confirmed break above 1.0210 or a rebound off 1.0166 with RSI conviction. Once the scalp is active the levels will remain in play until such time when either of the topside/bottom limit targets are compromised.

Event risk for the setup rests primarily with the greenback with September producer prices on tap for tomorrow. Consensus estimates call for prices to ease with the year on year expected to print at 6.4%, down from a previous read of 6.5% y/y. With the Fed reiterating that inflationary pressures are within acceptable tolerances, risk on the data print is to the topside, with a higher read likely to cause further concerns about the health of the domestic economy. That said, the data is likely to trigger little in the way of increased volatility.