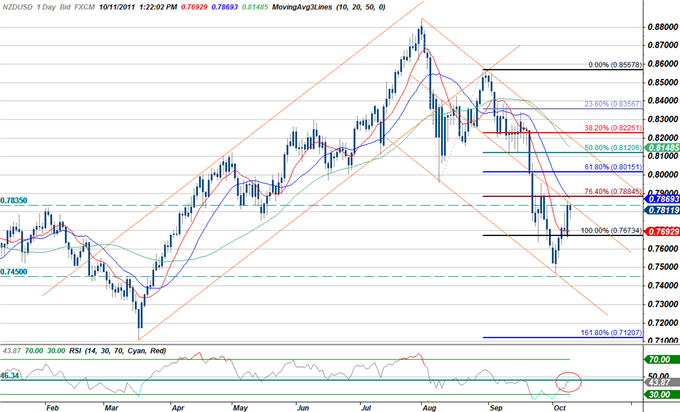 The NZD/USD has maintained a downside trend since breaking below channel support back in early August as risk assets came under pressure and investors flocked into the safety of the greenback. However the rebound off new trendline support on October 4th offers ideal scalp targets should price action remain below the 76.4% Fibonacci extension taken from the July and August crests at 0.7880. Note that the 20-day moving average now rests just below this level and should help provide some resistance to the topside. A break above the 0.7880 level negates the short-term bias as the NZD/USD pair moves into the upper half of the descending channel formation.

Daily relative strength now approaches RSI resistance at 46 with a rebound to the downside supporting the argument for further kiwi weakness. Also note that the dip into oversold territory in early October bodes well for our outlook on the pair. 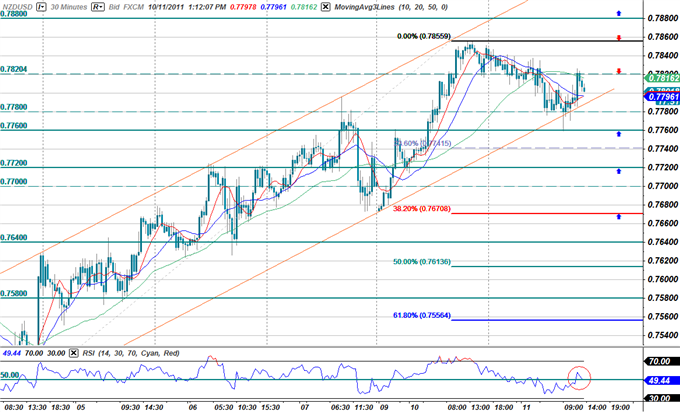 With a 1-hour average true range of 30.36 profit targets on said scalp should remain between 22-28 pips depending on entry. We reckon a break above the topside limit at 0.7880 negates the bias with such a scenario eyeing topside targets at the 0.79-handle and 0.7950.

*Note the scalp will not be active until a confirmed break below 0.7780 or a rebound off 0.7850 with RSI conviction. Once the scalp is active the levels will remain in play until such time when either of the topside/bottom limit targets are compromised.

Event risk for this scalp is rather negligible and lies primarily with the Kiwi. Highlighting the docket is the September read on the business performance manufacturing index on Wednesday night with investors eyeing the data for insight as to the health of the domestic manufacturing sector. The single greatest risk to this particular setup remains to be extreme shifts in broader market sentiment. As we saw over the weekend, simple rhetoric from French President Nicolas Sarkozy and German Chancellor Merkel was enough to fuel a 3%+ rally in US equity markets, with the kiwi surging as risk flows returned to markets. Should the rally continue to push higher, we will attempt to scalp the topside targets with a breech above our topside limit at 0.7880 giving us the green light for further kiwi gains.