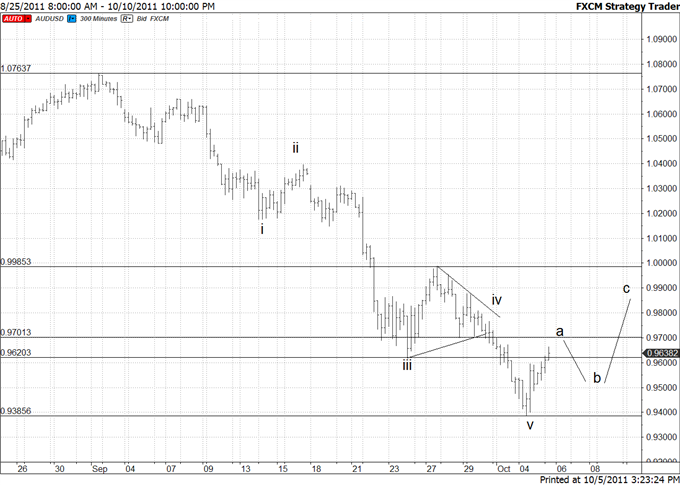 Scalping the Waves in Australian Dollar / US Dollar

A collaborative effort between Jamie Saettele and Michael Boutros, Scalping the Waves aims to identify trading setups within the waves that are most conducive to superior trades (higher volatility, higher reward/risk…the Elliott wave model tells us that we want to stay away from most corrective behavior for example). The report will be published as market action dictates.

The decline from 10764 is composed of 5 waves, thus expectations are for a 3 wave correction. Corrections often reach the former 4th wave of one less degree, which in this case would be 9985. Already nearly 300 pips from yesterday’s low, the AUDUSD has entered a resistance zone defined by former lows at 9620 and 9700. The rally probably composes wave A of the expected 3 wave correction (or simply the first leg of a larger corrective rally). 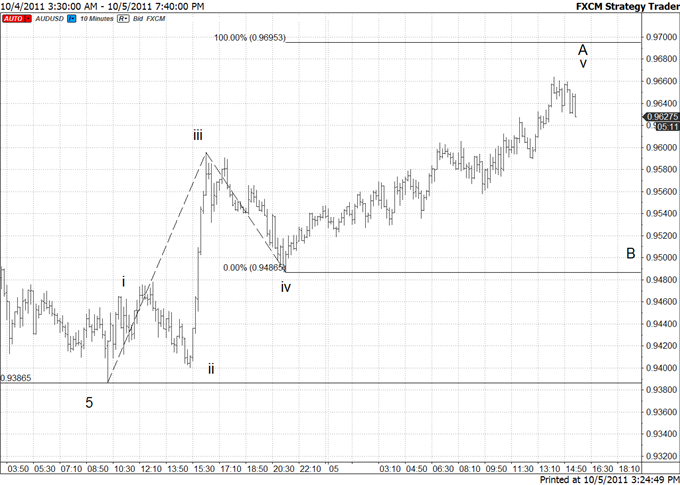 Just as the decline from 10764 is in 5 waves, so too is the rally from 9387 (at a much smaller degree of course). Short term waves are often tricky as the structure of the rally from 9487 makes clear. The move from that level is extending and 9700 needs to hold in order for the above count to remain favored. As long as 9700 holds, expectations are for weakness in order to correct the rally from 9387. The 9485-9505 area is the estimated bottoming zone. A break above 9700 would negate the ‘down to 9500 and into a bottom’ scenario but higher to 9985 would still be favored (the path taken to get there uncertain however). 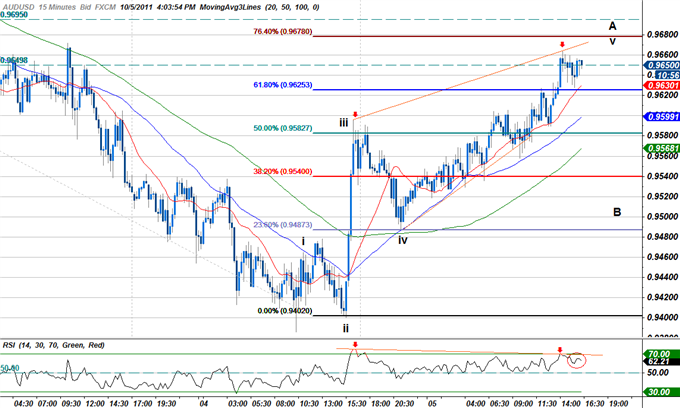 A 1hour ATR yields profit targets of 21-34pips depending on entry, with our bias weighted to the downside so long as price action holds below the 97-handle. Note that a test of the figure may be in the cards as risk appetite continues to support higher yielding, commodity backed currencies in the interim. Preferred short entry targets are eyed at the 76.4% Fibonacci extension taken from the September 26th and October 4th troughs at 9678, and the 9695 resistance target. Profit targets are held at the 61.8% extension at 9625 with subsequent floors eyed at 9585, the 38.2% extension at 9540, and the 23.6% extension at 9490. We look for wave B to bottom in this region before moving higher. Once the price target has been triggered we look to play these same levels to the topside.

A break above the 97-figure invalidates the wave count with such a scenario eyeing topside targets at 9735, the 100% Fibonacci extension at 9760, and the 98-handle. Stronger resistance is eyed higher at 9850. Note that the single biggest risk to our current setup will be on Friday when the US releases non-farm payroll figures. A stronger than expected print will likely support the risk trade with the aussie the chief beneficiary of risk-on flows.

*Note the scalp will not be active until a confirmed break below the 61.8% extension at 9625 or a rebound off Resistance Target 1 at 9678 with RSI conviction. Once the scalp is active the levels will remain in play until such time at which B wave has completed or been invalidated.

To be added to Michael’s e-mail distribution list, send an e-mail with subject line "Distribution List" to mboutros@dailyfx.com