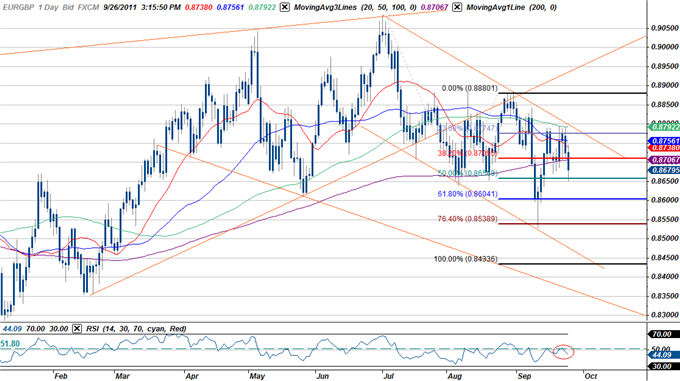 The EUR/GBP has continued to trade within a descending channel formation since the July high around 0.9050. Today’s break of the convergence of the 200-day moving average and the 38.2% Fibonacci extension taken from the July 1st and August 29th at the 0.87-figure sees increased risk for further losses for the pair. A look at daily relative strength also suggests the pair may remain under pressure with RSI rebounding off of interim resistance just above the 50-mark. As the situation in the Euro zone continues to deteriorate, we see scope for an increase in flows into the sterling which was the highest performing currency against the euro today. Accordingly our bias will be weighted to the downside noting that anther test of the 200-day moving average may be in the cards. 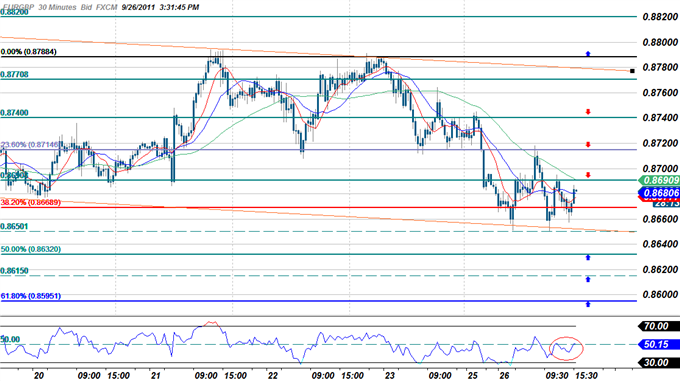 With a 1-hour average true range of 22.11 profit targets on said scalp should remain between 17-22 pips depending on entry. We reckon a break above the topside limit at 0.8770 negates the bias with such a scenario eyeing topside targets at 0.8790 and 0.8820.

*Note the scalp will not be active until a confirmed break below the convergence of trendline support and the 0.8650 support level or a rebound off the 0.8690 resistance level with RSI conviction. A topside test of trendline resistance also may be in the cards before we break lower. Once the scalp is active the levels will remain in play until such time when either of the topside/bottom limit targets are compromised.

Notwithstanding further developments out of Europe, event risk for the pair is rather negligible with only the German GFK consumer confidence and UK CBI sales on tap. Consensus estimates call for an October confidence print of 5.0, down from a previous read of 5.2, while CBI reported sales are expected to slump further with a September print of -15. The data it expected to confirm concerns of a global slowdown as confidence and sales continue to slump. Further developments regarding the debt crisis in the EU region are likely to impact our setup more substantially as we saw today. News that officials had come up with a credible plan to expand the EFSF program saw the euro whipsaw before surging higher against the dollar. That said, we will remain flexible with our bias here as we await further updates on the composition of the proposed plan.