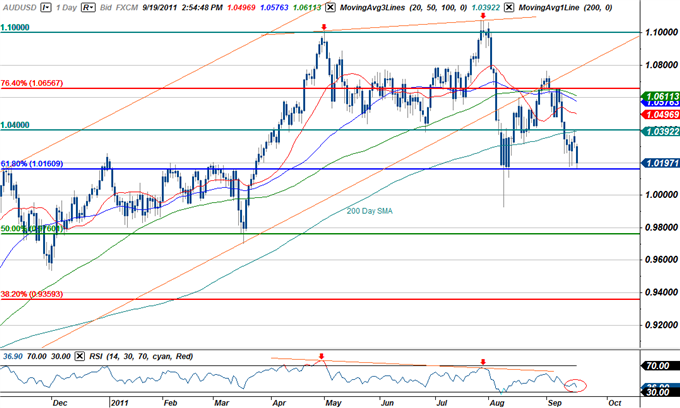 News that the ECB has coordinated with the Fed, the BoE, the BoJ, and the SNB in an effort to boost dollar liquidity to European banks sent stocks higher last week as concerns about an imminent Greek default eased. However a 2-day summit of EU leaders failed to calm fears after the meeting yielded no concrete structural measures to avert the spread of contagion to neighboring periphery nations resulting in a broad based risk sell-off early in the week. As noted in last week’s AUD/USD Scalp Report, pair saw a sharp rebound off the convergence of the 200-day moving average and the 1.04 resistance level before continuing lower in North American trade with daily relative strength supporting the argument for further aussie losses. With risk sentiment now in line with our bias, the setup should continue to play out and remains weighted to the downside. 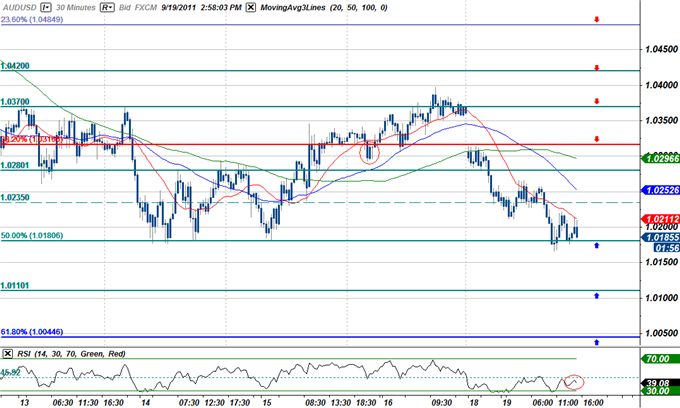 With a 1-hour average true range of 28.76 profit targets on said scalp should remain between 21-26 pips depending on entry. We reckon a break above the topside limit at 1.0420 negates the bias with such a scenario eyeing topside targets at 1.0485 and 1.0565.

Note the scalp will not be active until a confirmed break below the 1.0180 or a rebound off the 1.0280 resistance level. Once the scalp is active the levels will remain in play until such time when either of the topside/bottom limit targets are compromised.

Event risk at this point rests primarily with the Aussie with the RBA policy meeting minutes on tap overnight. Investors will be lending a keen ear to remarks from central bank Governor Glenn Stevens for an assessment of conditions in the continent-nation. Expectations for an RBA rate cut continue to climb with Credit Suisse overnight swaps now factoring in nearly 150 basis points in interest rate cuts, with a 94% chance of at least a 25basis point cut at the next policy meeting. If Steven’s comments are more hawkish than anticipated, the aussie could see a rebound and upset our downside bias on the trade. Tomorrow US investors get another update on the ailed housing market with housing starts and building permits on tap. Consensus estimates call for housing starts to decline by 2.3% m/m in August, down from a previous print of -1.5% m/m. Building permits are also called lower at -1.8% m/m, albeit an improvement on the previous print of -3.2% m/m in July.

The single greatest risk to our bias remains substantial shifts in market sentiment. As growth and debt concerns continue to mount the aussie is likely to suffer the brunt of the losses as investors jettison higher-yielding growth-back currencies for the relative “safety” of the yen and the dollar.

You can also follow Michael on Twitter@MBForexfor updates on this scalp and other trades.