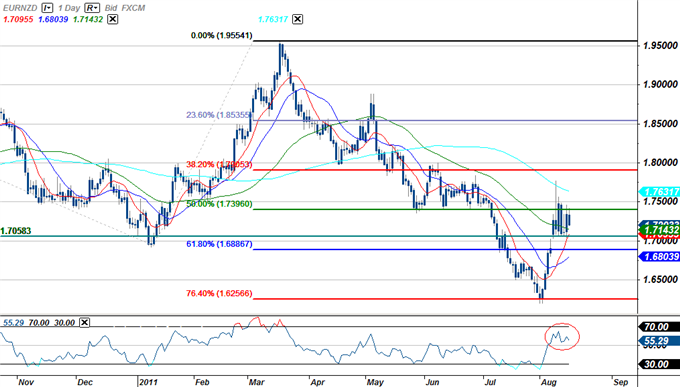 We preface this report by noting that current market volatility is unfavorable for longer-term scalp setups as markets continue to remain in a heightened sense of alertness to breaking economic data or news. Still, it’s worth noting that this particular setup presents traders with opportunities for medium-sized scalps after the EUR/NZD pair rebounded off the 200-day moving average and the 50% long-term Fibonacci extension taken from the November 2009 and March 2011 crests at the 1.74-figure. The kiwi’s resilience against falling risk appetite and weakness in global equities bodes well for the currency as high-yielders tend to suffer on the back of risk aversion flows. Such is the case with the Aussie which saw steep declines last week amid volatile swings in global equities. Today’s reaction to French President Nicolas Sarkozy and German Chancellor Angela Merkel’s call for further European integration weighed on the euro as officials dismissed calls for the creation of a Euro Bond. With risk appetite creeping back into markets, the kiwi is likely to benefit as traders remain reluctant to move into the euro until further details on the proposed measures come to light. Accordingly our bias this setup will be weighed to the downside. 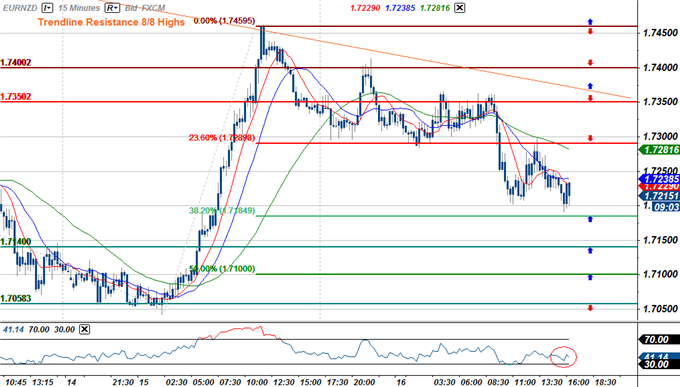 With an hourly average true range of 54.92, we look to a shorter time frame from which to derive our profit targets. A 30 min ATR yields a read of 43.26 and accordingly profit targets on said scalp should be between 30-35 pips depending on entry. Note that the scalp will not be active until a rebound off of resistance target 1 at 1.7290 or a confirmed break below support target 1 at 1.7185. Once the scalp is active the levels will remain in play until such time when either of the topside/bottom limit targets are compromised.

A downward sloping daily RSI of 55.58 suggests risk for the pair remains to the downside as the indicator has been unable to hold above the 60 mark since mid March. The last time an attempt was made to breach this level back in early may, the pair saw a steep move to the downside. We reckon a breech above the topside limit at upper bound trendline resistance negates the bearish bias on the trade with such a scenario eyeing topside break-targets at the 1.74-figure, 1.7460 and the 1.75-handle. Likewise a break below the bottom limit 1.7060 risks further losses for the euro with downside targets eyed at the 61.8% Fibonacci extension at 1.7015 and 1.6960.

Event risk of for the trade lies primarily with the euro with New Zealand producer prices expected to be of little consequence on the pair. Overnight, CPI data out of the EU is expected to hold at 2.5% y/y while consensus estimates for core prices are expected to remain unchanged at 1.6% y/y. While traditionally this data has the potential to be market moving as traders anticipate the central bank’s response to inflationary pressures, current economic conditions suggest response to the print will be rather muted as Credit Suisse overnight swaps are already factoring a zero chance for the ECB to move on rates at the next policy meeting. The single greatest risk to our bias remains rhetoric out of European central bankers after today’s press conference by French President Nicolas Sarkozy and German Chancellor Angela Merkel pushed for further European integration.