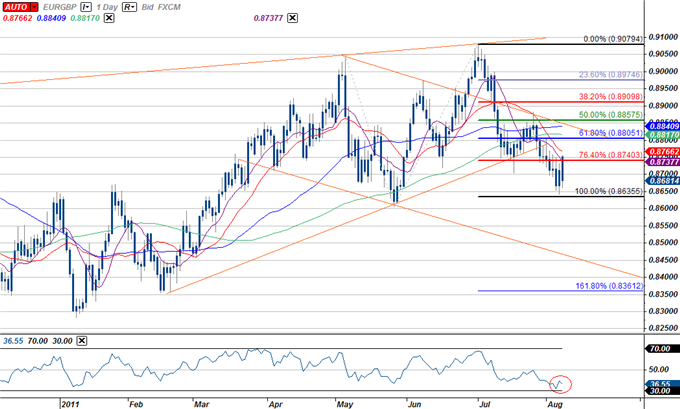 We continue to revisit the EUR/GBP as recent price action provides ideal entry for further downside moves. The pair failed a topside break at the 76.4% Fibonacci extension taken from the May 5th and July 1st crests at 0.8740 early in Asian trade with RSI sloping to the downside. With the situation in Europe continuing to deteriorate, we see further topside potential for the sterling to rise against the euro as the ECB now steps in to purchase periphery debt in an attempt to ease market tensions. Although it’s worth noting that slight divergence does favor the topside, the head and shoulder formation dating back to the May high is likely continue to see the pair lower and accordingly our bias remains weighted to the downside. 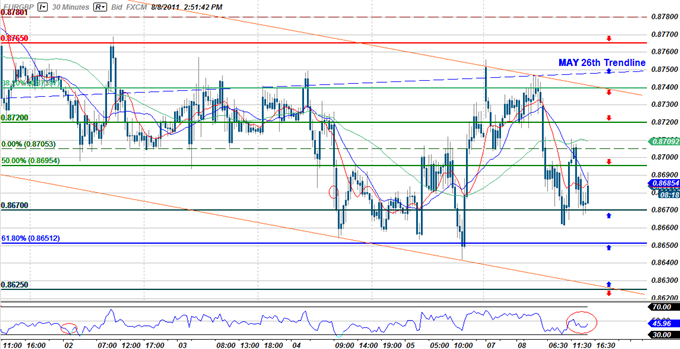 A 30min chart sees the pair continue to trade within a well defined descending channel dating back to July 26th noting strong topside resistance at former trendline support, now resistance, dating back to May 26th. Preferred short entry targets are held at the 50% Fibonacci extension taken from the July 1st and 26th crests at 0.8695 backed by 0.8720 and 0.8740. Support profit targets eyed at 8670, followed by the 61.58% extension at 0.8650 and 0.8625.

With a 2-hour average true range of just 31.72, profit targets on said scalp should be between 20-25pips depending on entry. Note that the scalp will not be active until a rebound off of resistance target 1 at 0.8695 or a confirmed break below support target 1 at 0.8670. Once the scalp is active the levels will remain in play until such time when either of the topside/bottom limit targets are compromised.

A daily downward sloping RSI of 36.37 suggests risk to the pair remains to the downside after a strong rebound off of the 50-mark late last month. We reckon a breech above the topside limit which rests with trendline support dating back to May 26th, currently at 0.8750, negates the bearish bias on the trade with such a scenario eyeing topside break-targets at 0.8765 and 0.8780. Likewise a break below the bottom limit at 0.8625 risks further losses for the euro with downside targets eyed just above the 76.4% extension at the 0.86-handle.

Event risk for the pair starts overnight, with German trade figures on tap. June trade balance is expected to ease to 14.0B down from a previous 14.8B, with both imports and exports seen contracting by 1.5% and 1.0% respectively. The data is followed by industrial and manufacturing production numbers out of the UK. Industrial production is expected to advance to 0.2% y/y, up from a previous contraction of 0.8%, while manufacturing is seen holding at 2.8% y/y. With the trade deficit seen slightly narrowing and German data expected to soften, risk for the pair remains to the downside.