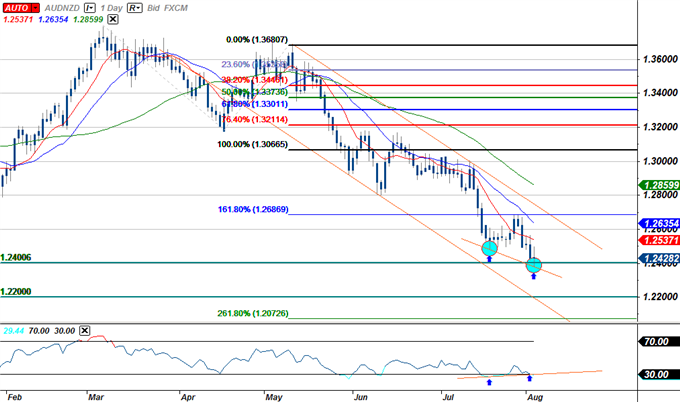 The AUD/NZD pair has maintained a well defined descending channel formation since late April as kiwi strength saw the pair continue to move to the downside. With strong support seen at the 1.24-handle and RSI dipping below the 30 level, the pair is likely to rebound for a possible test of upper-bound trendline resistance. Daily RSI is also currently signaling bullish divergence as price action makes lower lows and the RSI signal line makes higher lows. Although a pickup in risk appetite will tend to benefit both the Aussie and the kiwi, interest rate differentials will continue to favor the Aussie. Accordingly, our bias on this scalp will be weighted to the topside despite the encompassing bearish trend. 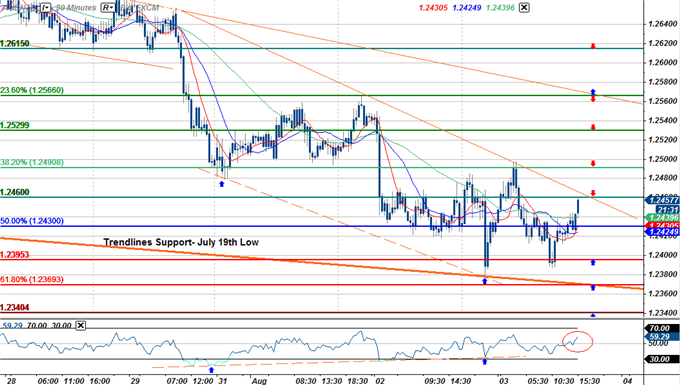 Bullish divergence is also seen on a 30min chart with the RSI slope sharply angled to the topside. Note that the convergence of short-term trendline resistance and the 1.2460 resistance level should see an accelerated topside moves with a breach. Preferred long entry targets are held at the 50% Fibonacci extension taken from the July 12th and 27th crests at 1.2430, and 1.2395. Resistance profit targets are eyed at 1.2460 backed by the 38.2% Fib extension at 1.2490, 1.2525, and just below the 23.6% extension at 1.2560.

With a 2-hour average true range of just 42.96, profit targets on said scalp should be between 28-33pips depending on entry. Note that the scalp will not be active until a rebound off of support target 1 at 1.2430 or a confirmed break above 1.2460. Once the scalp is active the levels will remain in play until such time when either of the topside/bottom limit targets are compromised.

A daily RSI read of 29.88 suggests risk to the pair remains to the topside. We reckon a break below the convergence of the 61.8% Fibonacci extension and trendline support dating back to July 19th at 1.2370 negates the bullish bias on the trade with such a scenario eyeing the bottom limit break-targets at 1.2340 and the 76.4% extension at 1.2295. Likewise a break above the topside limit at the convergence of upper-bound trendline resistance at the 23.6% Fibonacci extension at1.2560 risks further losses for the kiwi with topside break-targets eyed at 1.2615 and 1.2680.

Notwithstanding significant swings in markets sentiment, event risk for the trade rests primarily rests with the kiwi with employment figures on tap overnight. Year on year employment is expected to rise by 2.0%, up from a previous read of 1.8% y/y, with the unemployment rate expected to ease to 6.5% from 6.6%. A stronger-than-expected print on the data risks upsetting our bias as kiwi strength will weigh on the AUD/NZD pair.

You can also follow Michael on Twitter@MBForexfor updates on this scalp and other trades.