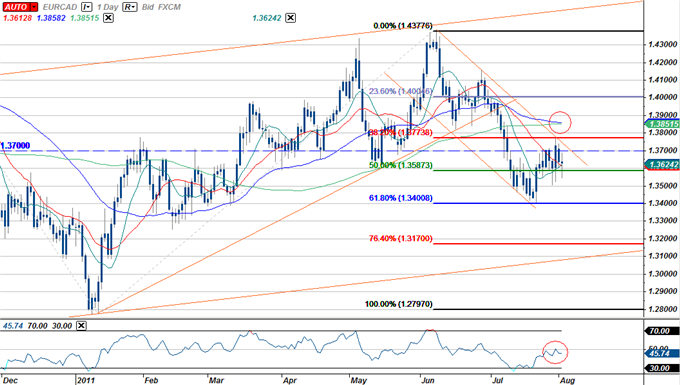 Today’ scalp revisits a EUR/CAD trade last week which played out quite favorably hitting all our levels including our extended break limit target. A relief rally in the euro over the past few sessions provides ideal entry points for further scalps to the downside. A daily chart shows the pair remaining in a well defined descending channel after failing to breach above the convergence of the 38.2% Fibonacci extension taken from the October 25th and June 8th crests and upper bound trendlines resistance at 1.3775. A dead cross of the 50 and 100-day moving averages seems likely over the next 24-hours as the euro continues to come off. Although the pair did break above our topside barriers later in the week, a move back within our levels sees the scalp setup intact. Accordingly our bias on the trade will remain to the downside. 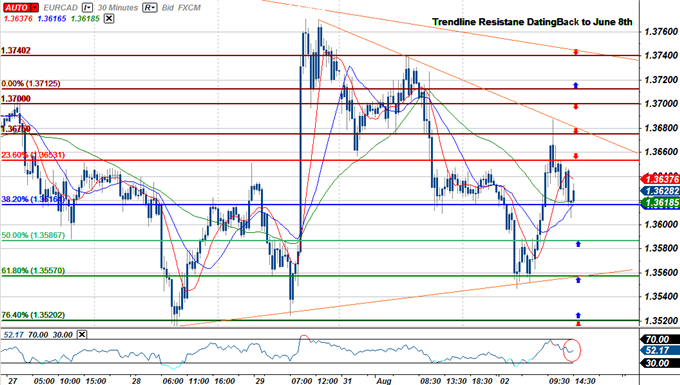 A 30min chart shows the pair bottlenecking into an embedded short-term wedge formation as the euro continues to pair gains made during last week’s rally. Preferred short entry targets are held at the 23.6% Fibonacci extension taken from the July 13th crest 26th crests at 1.3650 backed by the 1.3675 and the 1.37-figure. Support profit targets eyed at the 50% Fibonacci extension at 1.3590, followed by the convergence of the 61.8% extension and short-term trendline support at 1.3560. A break here sees subsequent floors just above the 76.4% extension at 1.3520.

With a 2-hour average true range of just 36.21, profit targets on said scalp should be between 25-30pips depending on entry. Note that the scalp will not be active until a rebound off of resistance target 1 at 1.3650 or a confirmed break below the 38.2% Fibonacci extension at 1.3615. Once the scalp is active the levels will remain in play until such time when either of the topside/bottom limit targets are compromised.

A daily downward sloping RSI of 45.74 suggests risk to the pair remains to the downside after rebounding off the 50 mark, a level is has been unable to break above since late June. We reckon a breech above the topside limit at 1.3710 negates the bearish bias on the trade with such a scenario eyeing topside break-targets at the convergence of upper bound trendline resistance dating back to the June 8th peak and the 1.3740 resistance level. Likewise a break below the bottom limit at the 1.3520 risks further losses for the euro with downside targets eyed at 1.3490, the 100% Fibonacci extension at1.3465 and 1.3430.

Notwithstanding significant swings in markets sentiment, event risk for the trade rests primarily with the euro with the German Services PMI, Eurozone services & composite PMI, and retail sales on tap for tomorrow. The docket is highlighted by the retail sales report with consensus estimates calling for a print of -1.0% y/y, a slight improvement from the -1.9% print seen a month earlier. A stronger than expected print on the data flow could see a relief rally for the euro and upset our bias, while a weaker than expected print would likely see accelerated losses for the single currency in our favor. There is no data on the Canadian docket for the remainder of the week.