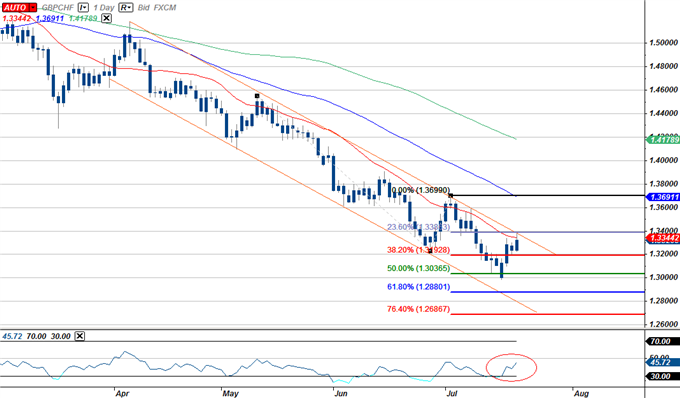 The GBP/CHF has maintained a well defined descending channel formation since the start of April as haven flows continued to support the franc. Today the pair tested the 23.6% Fibonacci extension taken from the May 11th and July 4th crests at 1.3385 after briefly breaking above the 20-day moving average. With the rally seen in markets this week, it’s likely that appetite will soften amid thin trading ahead of the weekend. Subsequently the swissie may pare some of the losses sustained this week, pressuring the pair lower. Also, with no data on the docket for the UK, its unlikely the sterling will have enough momentum to breech this long-term formation. Our contrarian Speculative Sentiment Index reveals trader remain net long the pair, with 2.1 traders long for every one that is short, further supporting weakness in the sterling. Accordingly, our bias on the pair will be weighed to the downside, with a confirmed break above trendline resistance reversing our bias on the scalp. 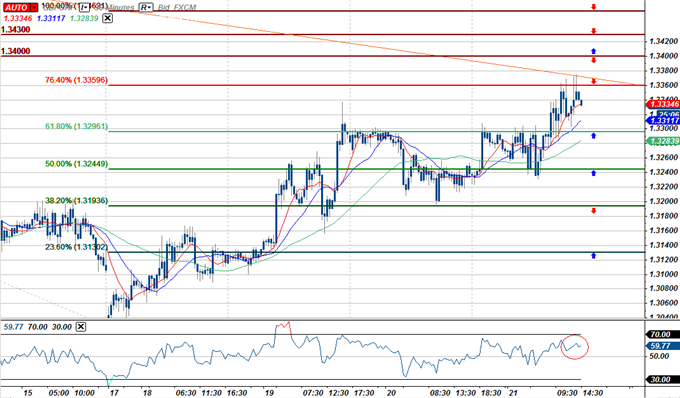 A 30min chart shows the pair holding just below the convergence of the upper bound trendline channel resistance and the 76.4% Fibonacci extension taken from the June 28th and July 17th troughs at 1.3360. Preferred short entry targets are held here backed by the 1.34-handle. Support profit targets are eyed just above the 61.8% Fibonacci extension at the 1.33-figure, followed by the 50% extension at 1.3245 and the 1.32-handle.

With a 2-hour average true range of 48.32 profit targets on said scalp should be between 30-35 pips depending on entry.Note that the scalp will not be active until a rebound off of resistance target 1 at 1.3360 or a break below interim support at the 1.33. Once the scalp is active the levels will remain in play until such time when either of the topside/bottom limit targets are compromised.

A daily RSI of 45.58 suggests risk to the pair remains to the downside here as the indicator has been unable to best the 50 level since early April. We reckon a breech above the topside limit at the 1.34-handle will confirm a breakout of the encompassing descending channel formation and negates the bearish bias on the trade with such a scenario eyeing topside break-targets at 1.3430 and 1.3460. Likewise a break below the bottom limit at the 1.32-figurerisks further losses for the sterling with downside targets eyed at 1.3160, 1.3130 and the 1.30-handle.

Notwithstanding significant swings in markets sentiment, risk event for the pair is rather negligible with no economic data on either docket for the remainder of the week. Should risk appetite pickup dramatically, the swissie could come under substantial pressure and risks a topside break of the channel. Such a scenario eyes our resistance targets as limits for long entry positions.