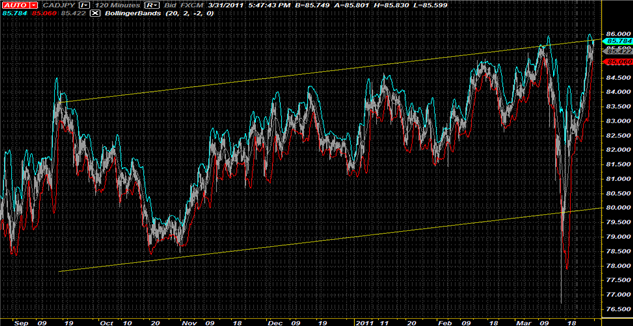 Starting in early-Novmber, the CAD/JPY pair began to pare its losses of 2010, taking back over 600-pips in the process. The first two months of 2011 continued the ascending channel trend, and March appeared primed to take the baton for the next leg of the range trade. Unlike other major crosses, the CAD/JPY pair has been trading in a relatively tight 350-pip range in 2011 (removing the ‘flash crash’ wick), with recent moves marked by 125- to 150-pip daily swings following the crisis. After breaking above its channel’s regression last week, the pair appears primed to test the upper range of its ascending channel and potentially push through it, ready to set fresh 2011-highs. Now, with no scheduled event risk on the horizon, coupled with the pair reach critical technical levels, a scalping opportunity has emerged for traders to collect profits on the CAD/JPY pair.

The ascending channel has been firmly in place since the first week of November, following a whole year of declines before the advance. although the pair began trending higher in late-May 2010. The pair is trading near its highest level since July 2010, but still has a long way to go to recoup its losses pre-recession, when it was trading above 100 Yen per Loonie during the summer of 2010. Since the coordinated central bank intervention, the Yen has lost ground against the Loonie eight of the past eleven days, and the deepening nuclear crisis suggests that the trend won’t be bucked. With the RSI continuing to rise on the 120-minute chart, as well as a Slow Stochastic oscillator trending higher, with the %K higher than the %D at 95 and 87, respectively, momentum is bullish for the CAD/JPY pair in the near-term. 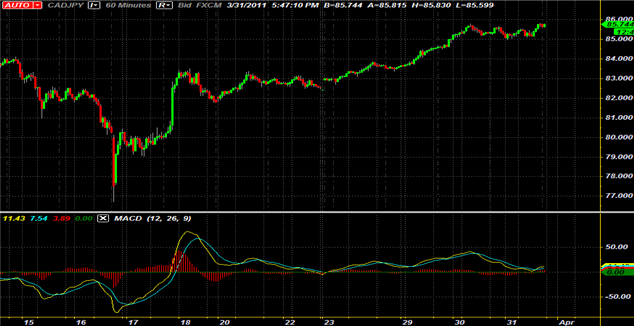 Looking at the 60-minute charts, it appears that the general trend of appreciation has been continuing since November 1, after trading choppily to the downside for the first 11-months of 2011. The near-600-pip march north was abated by the ‘flash crash’ across Yen-crosses, following the earthquake and ensuing tsunami. In approximately two weeks, the pair has gained over 900-pips, on fears of weakened Japanese growth for some time as the nuclear situation persists. Yen-crosses are now significantly overweight (suggesting Yen strength could be due for a correction) but with the Bank of Japan demanding a weak Yen, and there persisting the chance of concerted, coordinated intervention against the Yen, it is hard to suggest that the Yen will strengthen. Nonetheless, on a purely technical basis, the CAD/JPY is poised to weaken.

Heading into the next few hours, with an ATR of 156 on the daily charts, it appears that there is room to scalp as the pair trades between its 50.0 Fibo on 38.2 Fibo on the April 27 to November 1 move. The pair continues to hold above its 20-SMA and 50-SMA, with the 50-SMA higher than the 200-SMA (known as a “gold cross”), which suggest the long-term bias is to the upside. In fact, the spread between the smaller moving averages and the greater moving averages is widening, suggesting momentum to the upside is accelerating. Given this upward momentum, the pair could climb higher through its range top before it retraces slightly. 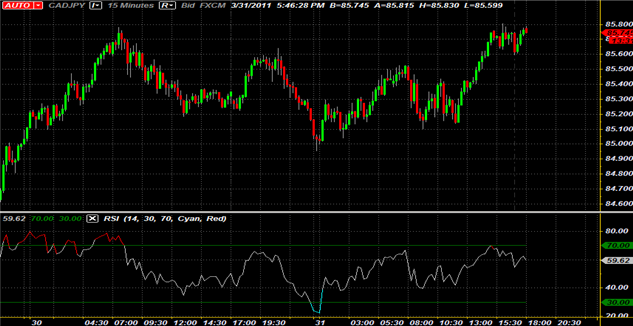 With no significant data due tomorrow for either country, the focus for the Yen will be the continuing nuclear crisis, and whether or not the Bank of Japan will guarantee funds for the recovery effort. On the Canadian side of the pair, traders will look at the U.S. nonfarm payrolls report as a proxy of the broader recovery; a stronger U.S. economy bodes well for Canada, as their largest trade partner is the U.S, which could translate into strong export data for Canada.