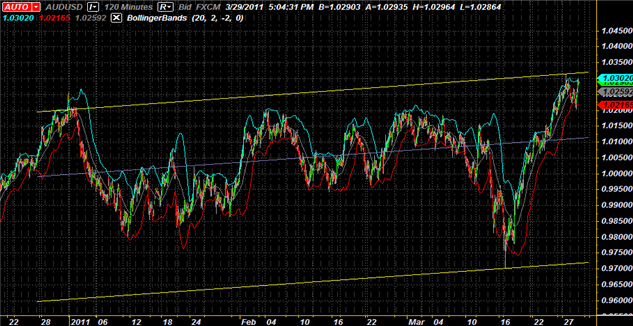 The AUD/USD has traded in approximately a 600-pip channel in 2011, certainly one of the less volatile pairs during the first three months of the year, as opposed to some other currency pairs, which have moved thousands of pips during said time frame. Nonetheless, since the widespread sell-off of the Greenback following the natural disasters and ensuing nuclear disaster in Japan, the Australian dollar has been among the top gainers against the Greenback, jumping from just above 0.9700 to slightly above 1.0313 in less than two weeks. Accordingly, the low and high during the period mark the weakest and strongest levels the Aussie has traded against the Greenback in 2011. Now, with little scheduled event risk on the short-term horizon, coupled with the AUD/USD pair congesting near its range top, a scalping opportunity has emerged for traders.

The ascending channel was carved out at the start of January, placing the pair as high as 1.0313 on Monday, but the pair’s appreciation can be traced back to June 2010. A shift to risk appetite coupled with widening interest rate yield has contributed to this gain, as well as the surge in commodity prices (the Aussie is one of the three commodity currencies, with the Kiwi and the Loonie). With the pair approaching the top of the channel that has been in place since the beginning of the year, and technical indicators suggesting overbought conditions, the push for new highs may be delayed as a corrective wave may be due. 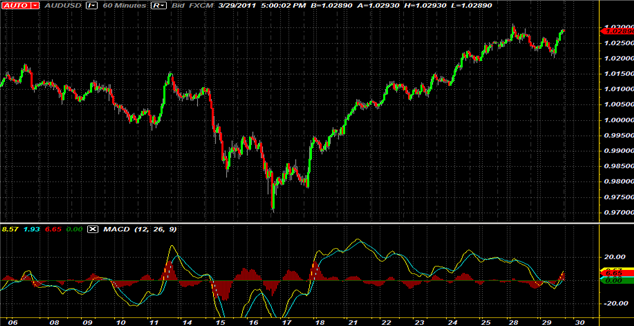 Looking at the 60-minute charts, the AUD/USD pair has been trading in a choppy, sideways but mostly northern pattern with all of the losses over the first two weeks of March erased in the last two weeks. However, the appreciation occurred rather quickly, suggesting that a retracement may be in order before further upside potential is able to be realized. The MACD Histogram suggests that the pair is reaching its maximum bullish divergence, on the 60-minute chart. This is confirmed by reexamining the RSI from the 120-minute chart, which is currently just below overbought levels, at 63, though was as high as 65 earlier in today’s session; similarly, the RSI is coming off of overbought levels on the 15-minute chart, having just dropped below 70, signaling further pair weakness.

Heading into the next few hours, with an ATR of 136 on the daily charts, it appears that there is room to scalp as the pair tests its all-time high against the Greenback, a level that was set Monday when the pair briefly touched 1.0313. Given the ascending channel, and general overbought conditions of the pair, before further new highs are set, a retrace is likely; the pair could fall back to its 5-SMA at 1.02561, or even as far as its 23.6 Fibo on the March 17 to March 28 move. The Slow Stochastic oscillator on the 120-minute chart suggests that further gains could be on the horizon, with the %K holding above the %D, but with the RSI flattening and changing direction southward, bearish pressure is gathering. This is confirmed on the 120-minute chart as well by the MACD Histogram, which, although initially positive to start today, has since narrowed and is at parity and trending towards a bearish divergence. 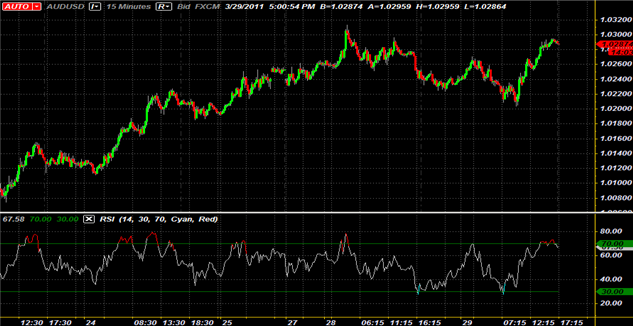 The docket is empty of significant economic data for Australia, though the U.S. has one event over the next 24-hours that could provoke some short-term volatility. The ADP employment report, due in the morning of Wednesday’s North American session, could give traders some insight into how the labor market has changed over the past month. However, because it has not historically been a sound gauge leading the nonfarm payrolls report on the following Friday, the data could be brushed aside as traders wait on this Friday’s report.