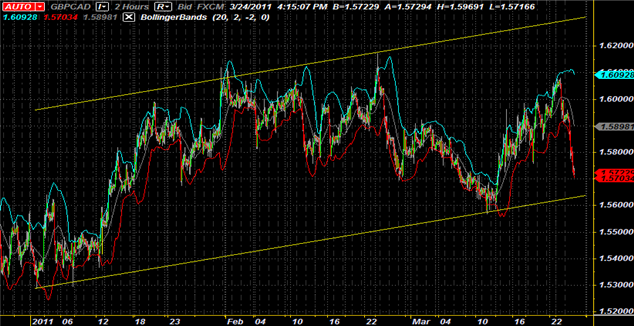 The GBP/CAD pair dropped approximately 1000-pips from late November through the end of December, but after said decline, shot straight upward in the first three weeks of January, gaining nearly 80 percent of its losses in the process. After failing to close above 1.6100, the GBP/CAD pair trended lower back towards 1.5600 from the last week of February to the second week of March, breaking out of its sideways channel that it was trading in during much of February. After a recent surge upwards predicated on the notion that the Bank of England would hike rates in the near future, coupled with slowed underlying growth figures from Canada, the Pound regained traction, leading to another test of the psychologically significant 1.6000 level. The rally was stalled, as speculators ramped up bets that the U.K. would not be able to sustain growth at a higher interest rate, thus derailing the recovery, and over the past few days, traders having been dumping the Pound in favor of the Loonie. As such, with the pair facing significant oversold levels, and little scheduled event risk horizon, a scalping opportunity has emerged for traders to collect profits as the GBP/CAD pair inches towards its range bottom in the ascending channel it has been entrenched in since the start of 2011.

The ascending channel was carved out at the start of January, placing the pair as high as 1.6100, but the pair’s failure to hold above this level led to a consolidation first, then a sharp depreciation as the bull momentum was exhausted. Deteriorating underlying economic conditions in Britain, as noted by recent economic readings and data forecasts, suggest that the British economy is headed for a stagflating state – low growth and high inflation – despite commentary by Bank of England policymakers suggesting otherwise. The OIS shows that interest rate hike expectations have fallen in recent weeks, with the implied basis points priced in by markets having fallen from 92 to 68 since the beginning of March. The GBP/CAD pair, after touching 1.6000 as recent as yesterday, fell through the channel’s regression and is now testing key Fibonacci retracement levels on the 120-minute chart. 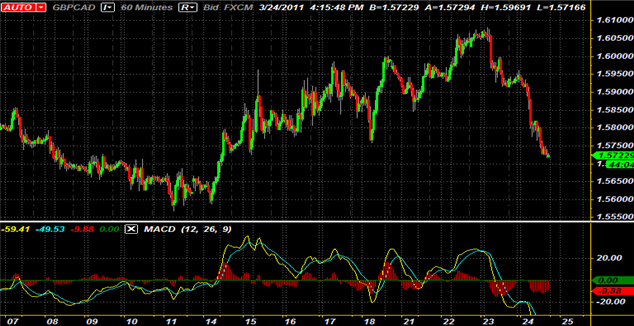 Looking at the 60-minute charts, the GBP/CAD pair has been trading in a choppy, sideways pattern with all of the gains over the past two weeks erased. However, the depreciation occurred rather quickly, suggesting that a retracement may be in order before further downside potential is exposed. The MACD Histogram suggests that the pair is tailing off of its bearish divergence, having peaked, on the 60-minute chart. This is confirmed by reexamining the RSI from the 120-minute chart, which is currently extremely oversold, at 22.

Heading into the next few hours, with an ATR of 160 on the daily charts, it appears that there is room to scalp as the pair tests its 50.0 Fibo for the first time since March 14. Accordingly, a move higher is likely, as shorter-term momentum indicators point towards gains as the bear rally might be running out of steam. The Slow Stochastic oscillator on the 120-minute chart looks like it has bottomed out, thought the %K is still less than the %D, at 6 and 10, respectively. A turn higher in the next few hours confirms our buy signal. However, if the Pound faces continued selling pressure, then we could be looking at a test of the range bottom – and coincidentally 38.2 Fibo on the January 3 to February 23 move – before a rebound occurs. 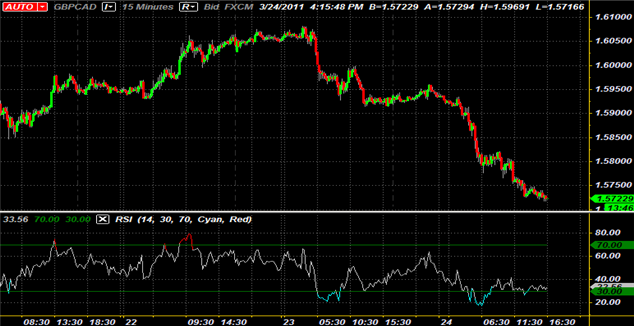 The docket is empty of significant economic data for both the U.K. and Canada for the next few days, although the recent note by Moody’s suggesting that the U.K. should temper its growth expectations, and accordingly, its rate hike expectations certainly dampen support for the Pound. The Loonie remains a safer bet to its American counterpart, given strong underlying fundamentals which suggest Canada is the first country to return to pre-recession levels.