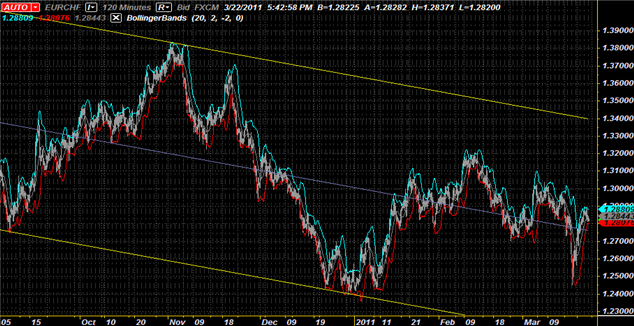 Seen as a risk-on, risk-off pair gauge for Europe over the past few months, I noted that “the EUR/CHF has appeared to have completed its most recent advance”; accordingly, the pair has declined as expected. To this end, the depreciation was more dramatic than I anticipated, with the pair dropping below 1.2500; since then it has rebounded to a similar level at the time I made that notation last week. Under extreme technical pressure, the depreciation at the end of 2010 can also be credited to an increase in sovereign debt concerns, with the most recent sell off over the past few weeks can be marked by the market’s shift to risk-aversion due to the crisis in North Africa and the Middle East. Now, with the pair stalling around its long-term descending channel’s regression dating back to last May, and with little major event risk on the horizon over the next few days, a scalping opportunity has emerged for traders.

The descending channel has been firmly in place since the second week of May, and the trend has not been broken recently despite rallies in October and January which suggested the pair could break higher; however, they were merely corrective waves within the channel. The pair is trading near similar levels from last week, when it was at the neckline of a head and shoulders pattern. Given the sharp decline experience at the hands of the G-7 intervention, in which the European Central Bank among others shuffled its foreign exchange reserves composition, I believe that downward pressure remains for the EUR/CHF pair. The rebound higher in the middle of last week falls directly at the same lows at the end of 2010 and the start of 2011, when the pair completed a triple-bottom on the 120-minute chart. Although one might conjecture that the quick depreciation then equally fast spike higher has skewed technical levels, they are almost back same points they were last week when the pair was trading in the same range. Of note: on longer-term time frames (i.e., six-hour), which are less sensitive, the technical indicators observed are at the same points. 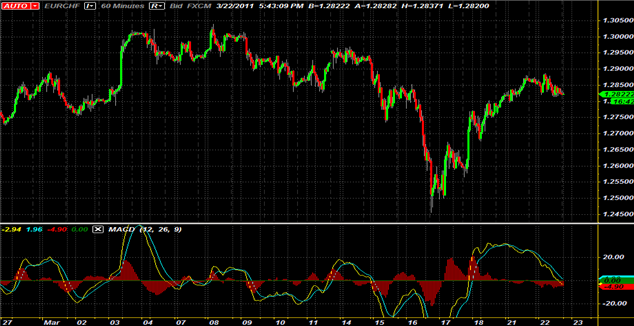 Looking at the 60-minute charts, it appears that the general trend of depreciation has settled recently, with the pair consolidating 250-pip range, discounting the sharp depreciation late in Tuesday’s session – the pair rebounded promptly, and price action, smoothed out, brushes aside said volatility. Nonetheless, ahead of the European Union Summit later in the week, and especially considering the Portuguese government is expected to shut down tomorrow, further weakness could be on the horizon for the EUR/CHF pair. As noted by the MACD Histogram, bearish momentum still persists, with the differential holding over the past few hours.

Heading into the next few hours, with an ATR of 131 on the daily charts, it appears that there is room to scalp as the pair trades just below its 23.6 Fibo on the daily chart, on the May 20 to January 7 move. With the ATR declining, our bias to the downside is further supported; recently, a higher ATR has coinciding with the pair appreciating, while a lower ATR existed when the EUR/CHF pair declined. The pair is sitting just below its 20-SMA at 1.2841, which it has failed to close above for three consecutive days. Should it break through the 20-SMA, the next resistance comes at the 23.6 Fibo at 1.2894, just below the 50-SMA at 1.2913. A push higher to these levels would not be unexpected, though a breakthrough said levels would need to come on the heels of higher volatility and wide-spread optimism. On the 120-minute chart, the RSI has come off near-overbought conditions, those has held steady around 50 since this morning. Accordingly, the MACD Histogram is showing a bearish divergence. The Slow Stochastic oscillator is below 20 on both the %K and %D, which are equal at 18. 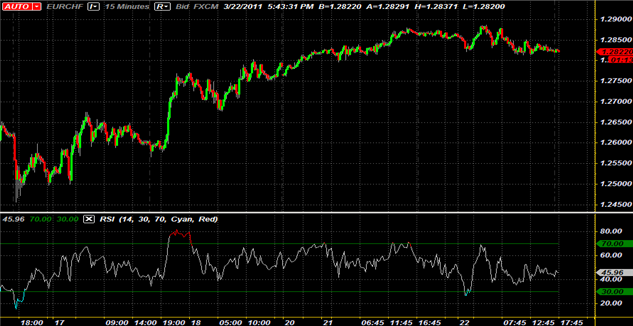 With no significant data due on the Swiss side of the equation, all fundamental volatility induced will need to be at the hands of European data. In fact, the only piece of fairly significant data due tomorrow is the Euro-zone consumer confidence reading for March, which could spark some short-term volatility. However, the main attraction for Euro-based crosses for the week is the European Union Summit, which is scheduled to take place on Thursday and Friday.