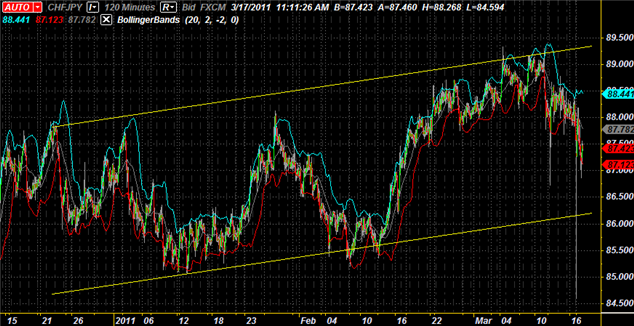 The CHF/JPY pair has been trading to the upside for much of 2011, on increasing concerns that the European sovereign debt situation would become the prevailing market theme for the year, and the Franc provided the most logical safe haven to its European counterpart.That changed over the last few days, as it appears that the Japanese are repatriating funds in order to help finance the rebuilding process. Nonetheless, despite the extremely volatile trading that occurred yesterday in between the end of the U.S. session and the start of the Asian session, the rising trend that started at the end of December continues to hold. As scheduled event risk remains limited for the both the Franc and the Yen over the next few days, a scalping environment has emerged as it appears that volatility should come down. Furthermore, as the situation in Japan sorts itself out, the market will shift its focus back towards the European debt issue, which should send inflows back to the Swiss.

The ascending channel has been firmly in place since the third week of December, although the pair began trending higher in late-May 2010. The pair is trading near its highest level since April 2010, but still has a long way to go to recoup its losses pre-recession, when it was trading above 100 Yen per Franc. As noted by the chart above, there was a significant 300-pip drop yesterday, but the market quickly retraced these losses; the CHF/JPY bounced directly off of its 200-SMA at 84.623. Despite the drop, which has skewed technical indicators, bullish momentum remains to the upside, with the RSI rising once again on the 120-minute chart. 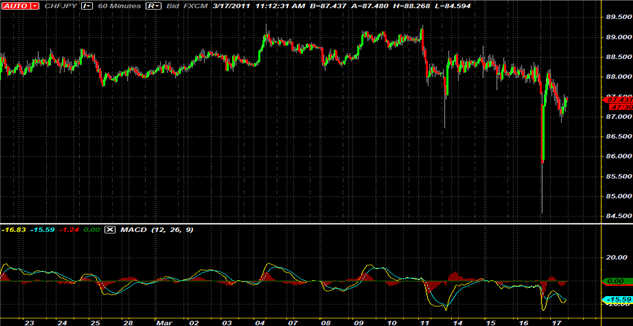 Looking at the 60-minute charts, it appears that the general trend of appreciation has been continuing for some time, though over the past few weeks it is clear that the pair has traded in a sideway range. Since the earthquake, however, the Yen has been appreciating, which is not unique; all Yen-crosses have appreciated in the week since the disaster. As noted earlier, the significant Yen appreciation skewed technical indicators, but as noted by the MACD Histogram on the 60-minute chart, it is clear that bearish momentum is tailing off. As speculators ramp up bets that the Bank of Japan is likely to intervene, coupled with expectations of a worsening debt situation in Europe, it is possible the CHF/JPY pair reverses its course and continues back in its ascending channel, without another significant depreciation similar to what occurred late in the U.S. session yesterday.

Heading into the next few hours, with an ATR of 104 on the daily charts, it appears that there is room to scalp as the pair trades at its 23.6 Fibo on the daily chart, on the November 2 to March 4 move. It should be noted that before yesterday’s significant 300-pip swing, the ATR was rising, but was holding at 85; the ATR has been rising steadily since the disaster, but before last Friday, the ATR was declining; pre-disaster levels for the ATR were 68-pips.The pair’s 50-SMA remains above its 100-SMA and 200-SMA, an indicator of a long-term bullish bias, and the differential has actually widened in the past few weeks before the disaster. The CHF/JPY pair has been finding resistance at the 50-SMA in light of the sharp depreciation, so this is our significant support over the next few days. On the 120-minute chart, the RSI is still rising, further supporting our notion that the CHF/JPY pair is ready to continue its ascent barring significant intervention. 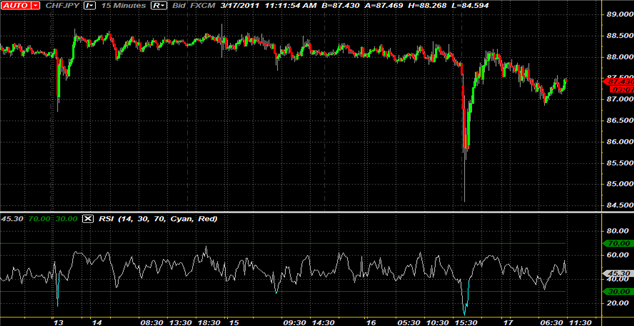 With no significant data due tomorrow for either country, the focus is on rhetoric coming from the Bank of Japan, as well has the decision set forth by the G-7 finance ministers’ meeting which is scheduled for later today. Accordingly, if the recovery efforts in Japan lag, or the nuclear situation worsens, it is possible to see another sharp depreciation as more funds are repatriated. On the other hand, with data of low importance due tomorrow, there could be a spark in short-term volatility, though the current geopolitical conditions remain the prevailing market trend.