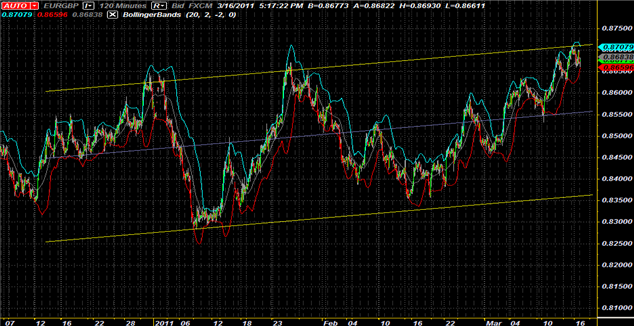 While the EUR/GBP found itself gaining downside momentum rather quickly towards the end of February, following commentary by the European Central Bank that interest rates are likely to rise as soon as the next meeting in April, the pair immediately reversed course and began its push towards fresh yearly highs. This was not unique to the EUR/GBP pair though; Euro-based pairs gained across the board. As such, any news, over the past few weeks, has generally propelled the pair in favor of the Euro, with Bank of England policymakers easing off their hawkish rhetoric while European Central Bank policymakers ramping up their hawkish commentary simultaneously. With little event risk on the horizon relative to other major currency crosses, coupled with the EUR/GBP pair approaching a range top that it has yet to break in 2011, a scalping opportunity has emerged.

The ascending channel has been firmly in place since the second week of December, although the pair began trending higher in late-November; the move from mid-November to mid-December was more of a sideways channel, however, and it took a break above the 0.8550 level to start the rising trend. The EUR/GBP is still thousands of pips below its highest point in 2010, which occurred in last March, when the EUR/GBP pair moved above 0.9000. The pair had climbed higher after swing trading lower below 0.8400 on concerns that the sovereign debt issues were going to weigh on the Euro, as well as hawkish commentary by Bank of England policymakers suggested that rate hikes may be sooner than the markets have anticipated; since then, the rhetoric has flipped, with European Central Bank policymakers almost guaranteeing a rate hike at their meeting in April, while BoE policymakers have eased off such sentiment. 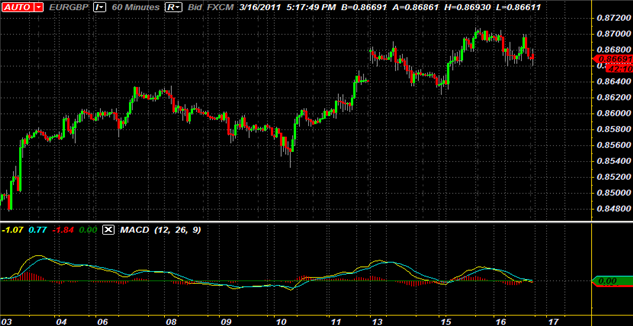 Looking at the 60-minute charts, it appears that the general trend of appreciation has been continuing for some time, since the .8300 area at the turn of the new year. The most recent leg up was at .8350, back in the middle of February. However, the pair has had trouble breaking the psychologically significant 0.8700 area, after testing it in December, then in January, and once again, this past week. The EUR/GBP pair’s bearish momentum is starting to pick up as its approached the 0.8700 level, which suggests that the recent appreciation might not have enough momentum to break through said area. However, it is worth noting that a clean break of the 0.8700 would be a breakout of the ascending channel, establishing the formed resistance as a new level of support.

Heading into the next few hours, with an ATR of 61 on the daily charts, it appears that there is room to scalp as the pair trades above its 76.4 Fibo on the daily chart, on the October 25 to January 10 move. The pair’s 50-SMA remains above its 200-SMA, an indicator of a long-term bullish bias, and the differential has actually widened in the past few weeks as the Euro as been bid up across the board. On the contrary, the 50-SMA is below the 100-SMA, which means that the pair could be range bound as it sorts itself out of the coming weeks. The EUR/GBP pair made a test of its range top and fell off slightly retraced; another test is not out of the question. On the 120-minute chart, the RSI is still rising, further supporting our notion that the EUR/GBP could rise before heading south in its descending channel once more. 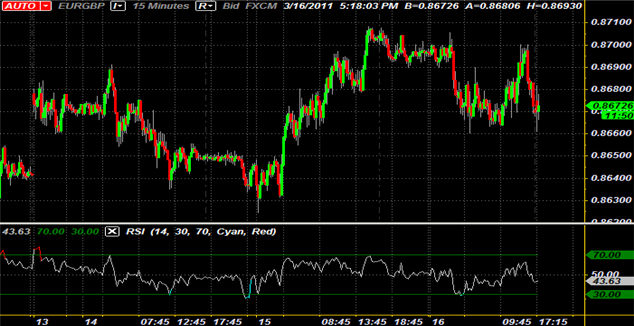 There is some significant data remaining on the docket for both countries for the rest of the week, with Euro-zone construction data due tomorrow, and the highly significant PPI reading from Germany due on Friday. On Friday, British consumer confidence is out, a reading of current sentiment and future expectations. Accordingly, as rumors of repatriation ramp over the next few days for Japan, the EUR/GBP pair could be one of the least volatile on the market; accordingly, the EUR/GBP pair has an implied volatility of 8.23 percent over the next week, the lowest amongst Euro- and Pound-based pairs.