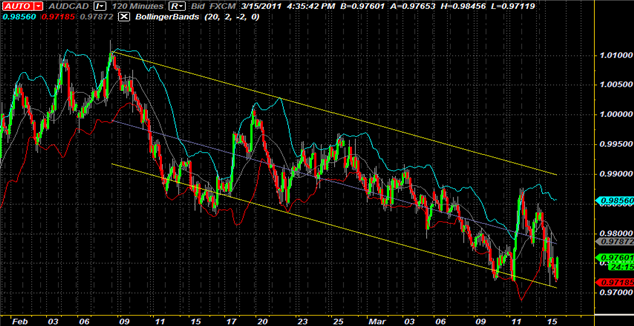 After falling to its lowest level since mid-September on January 12, the AUD/CAD pair was in a well-defined rising channel headed into the middle of February, eventually leading it over parity. However, in the ensuing four weeks, on a flight to safety, the AUD/CAD pair retraced towards its yearly low set in January at 0.9702. The well-defined descending channel since then is facing extreme downside pressure, with the pair near the range bottom. Accordingly, given the tight range and light even risk on the docket, it is an ideal candidate to capture pips. Now, the AUD/CAD pair appears poised to test the lower range of the channel once more, before continuing its next leg higher.

The descending channel has been firmly in place since the second week of February, which helped carry the AUD/CAD pair towards its yearly low of 0.9702. The pair had reached parity after swing trading up to 1.010 as commodities rallied coupled with a shift in inflationary expectations for Asia and Pacific Rim nations following a series of interest rate hikes by the People’s Bank of China. The general appreciation remains the broader trend, however, as the pair has been in a long-term ascending channel since February 2009, before the start of the major bull rally in equity markets. 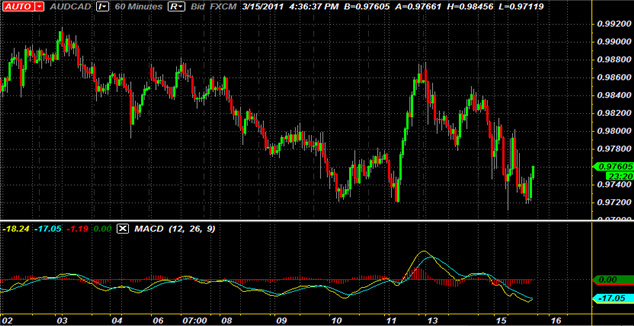 Looking at the 60-minute charts, it appears that the general trend of depreciation started at the 1.010 level during the second week of February, after the pair failed to hold above this psychologically significant level of parity. Similarly, the AUD/CAD pair, after falling as low as 0.9720, retraced its losses back above 0.9860, before continuing in its next leg down. The AUD/CAD pair’s bearish momentum is starting to tail off, which suggests that the recent depreciation might not have enough momentum to break through the 0.9720 area upon another test, and that some potential to the upside exists; a clean break of the 0.9720 would be a breakout of the descending channel, exposing the yearly low as a potential target.

Heading into the next few hours, with an ATR of 79 on the daily charts, it appears that there is room to scalp as the pair trades below its 76.4 Fibo on the daily chart, on the January 12 to February 8 move. Accordingly, the ATR is increasing; over the past few months, a increasing ATR has been a sign of AUD/CAD pair weakness. The pair’s 50-SMA remains above its 200-SMA, an indicator of a long-term bullish bias, but the differential has narrowed over the past few weeks, and 50-SMA dropped below the 100-SMA in the middle of February. The AUD/CAD pair made a test of its range bottom and rebounded; a full retracement back to its level on January 12 would also result in a test of the psychologically significant 200-SMA. On the 120-minute chart, the RSI is still declining, signaling further losses in the 20-pip range could be on the horizon before the AUD/CAD pair rebounds amid renewed risk appetite. 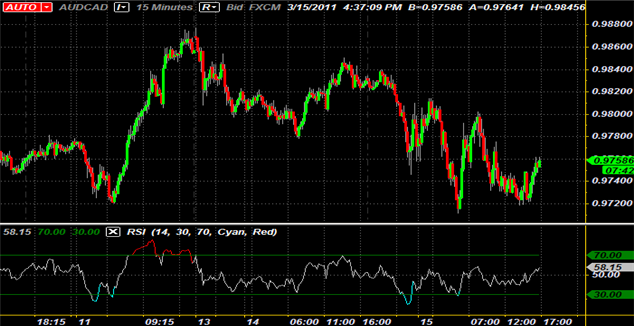 With no significant data due tomorrow for either country, little event risk is on the docket for the AUD/CAD pair. Markets will continue to examine the events unfolding in North Africa and the Middle East, while observing the situation in Japan; higher oil has been bullish for the Loonie, while the unrest over Japan has been bearish for the Aussie, relatively speaking. The next significant scheduled data release that could spark increased volatility in the pair comes on Friday, when Canadian inflation data is due. An increase in the CPI more than expected could stoke interest rate speculation among traders, leading to Canadian strength.