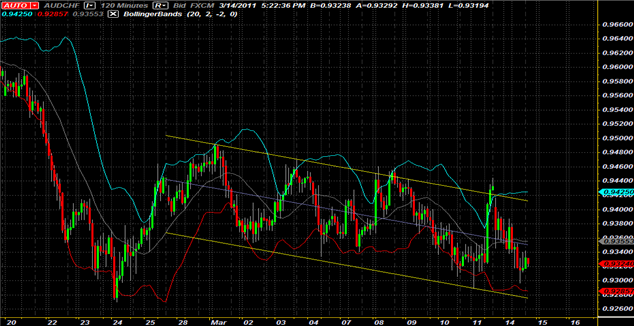 The AUD/CHF pair, after being particularly volatile during the month of February, relaxed and reentered is long-term trend of deprecation. While it appeared that investor sentiment shifted from risk-averse behavior at the end of January to risk-seeking behavior for the first few weeks of February, the last week of February and the first two weeks of March have been markedly different. Over the first three weeks of February, the AUD/CHF pair has carved out more than a 500-pip range, climbing as high as 0.9808; March has seen a much tighter approximate 200-pip range. The depreciation experienced over the past week has led to the pair to head towards the lower part of its channel, and as such, the pair appears primed to continue its range trade for at least the next week with little event risk on the docket.

The descending channel has been firmly in place since the third week of February, which helped carry the AUD/CHF pair towards its yearly low of 0.9270. The general depreciation has been firmly in place since May 2010, when the pair was as high as 1.0152. Despite the temporary return risk right after the start of 2011, traders have since taken the risk-averse route as tension of flared in North Africa and the Middle East. 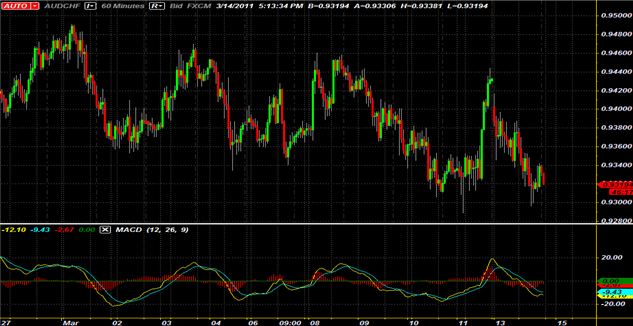 Looking at the 60-minute charts, it appears that the general trend of depreciation started at the 0.9450 level of recent, as the pair was unable to have consecutive closes on the daily chart above that level. The AUD/CHF pair has since moved lower towards the range bottom of its descending channel. Support is evidence at the 0.9300 level, which the pair failed to close below despite braking lower on multiple occasions. As noted by the MACD Histogram on the 60-minute chart above, the AUD/CHF pair’s bearish momentum is starting to tail off, which suggests that the recent depreciation might not have enough momentum to break through the 0.9300 area upon another test.

Heading into the next few hours, with an ATR of 100 on the daily charts, it appears that there is room to scalp as the pair trades below its 38.2 Fibo on the daily chart, on the May 6 to July 6 move. Accordingly, the ATR is declining; over the past few months, a declining ATR has been a sign of AUD/CHF pair weakness. The pair’s 50-SMA remains above its 200-SMA, an indicator of a long-term bullish bias, but the differential has narrowed over the past few weeks. The AUD/CHF pair, after trading above the 38.2 Fibo for the past six-plus months, appears to be ready to breakdown further. Further losses could extend towards the 23.6 Fibo at 0.92234 should the markets remain risk-averse. On the 120-minute chart, the RSI is still declining, signaling further losses in the 20-pip range could be on the horizon before the AUD/CHF pair rebounds amid renewed risk appetite. 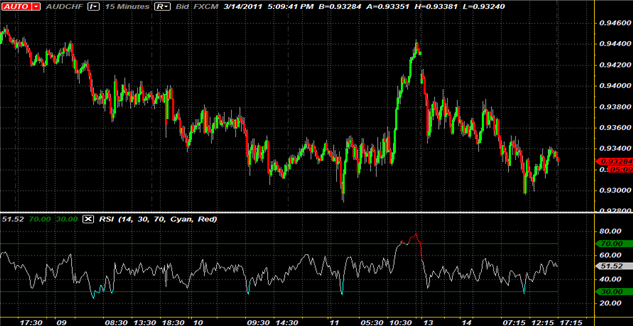 With no significant data due tomorrow for either country, little event risk is on the docket for the AUD/CHF pair. As the turmoil in North Africa and the Middle East continues, coupled with the market’s eye fixated on the events unfolding in Japan, it appears that traders are now stumped as to whether or not the environment is ‘risk-on’ or ‘risk-off’; hence the recent consolidation. A shift in the risk appetite will guide this pair, however. Commentary by the Swiss National Bank at their quarterly monetary policy meeting could spark volatility, though.