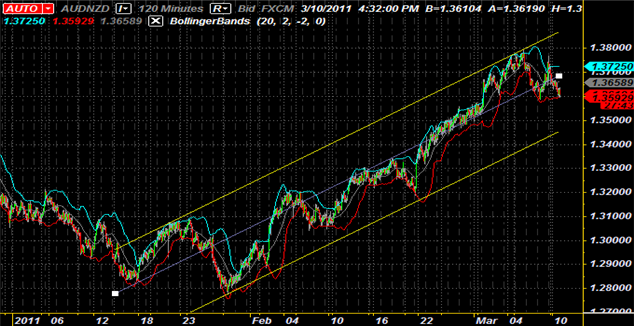 After gaining over 900-pips from the end of November to the end of December, the AUD/NZD pair nearly retraced all of its gains, falling over 700-pips in the ensuing five weeks. A shift to risk in the broader markets, however, led to some level of strength among all Aussie-crosses (and other risky assets) starting in the middle of January; the AUD/NZD pair itself rallied approximately 1000-pips from the second week of January to the first week of March. This move coincided with the longer-term ascending channel trend, in place since July. Now, with the pair at the top of both its long-term (July 2010 to present) and shorter-term (January to present) channels, coupled with little event risk on the horizon, there exists a favorable scalping environment for traders.

The ascending channel has been firmly in place since the second week of January, which helped carry the AUD/NZD pair to the top its long-term ascending channel that started in July 2010. Much of the recent strength came on the heels of the earthquake in New Zealand, which eventually forced the RBNZ rate decision yesterday to provide relief to lenders and credit seekers. Now that the event risk is over, the AUD/NZD pair appears to be awfully ‘heavy,’ and looks poised to retrace its sharp rally from the second week of the year. Currently, it is trading just above 1.3600, and momentum indicators it could decline unabated towards its 23.6 Fibo at 1.3524. 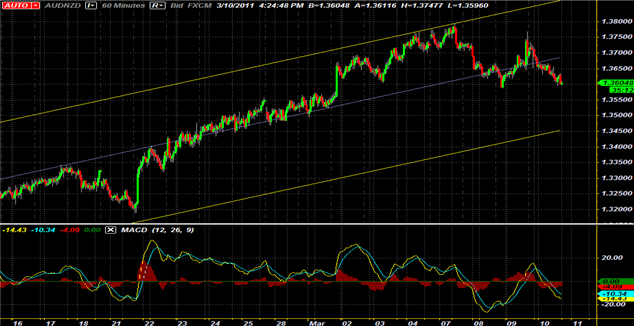 Looking at the 60-minute charts, it appears that the general trend of depreciation started at the 1.3800 level, and despite the RBNZ rate cut that increased the yield differential between the Aussie and the Kiwi – typically a bullish sign for the pair – the AUD/NZD pair has since moved lower towards the range bottom of its ascending channel. Resistance is evidence at the 1.3590 level, which the pair failed to produce consecutive closes below on the 60-minute chart on March 8. As noted by the MACD Histogram on the 60-minute chart above, the AUD/NZD pair’s bearish momentum remains strong, which suggests that the recent depreciation could have enough momentum to break through the 1.3590 level.

Heading into the next few hours, with an ATR of 122 on the daily charts, it appears that there is room to scalp as the pair trades above its 23.6 Fibo on the daily chart, on the November 22 to March 4 move. Accordingly, the ATR is rising; over the past few months, a rising ATR has been a sign of AUD/NZD pair weakness. The pair’s 50-SMA remains above its 200-SMA, an indicator of a long-term bullish bias, but the differential has narrowed over the past few days. The AUD/NZD pair, after trading above the channel’s regression for much of the past two weeks, is now holding below the regression at 1.3654; further losses could extend towards the range bottom at 1.3440, right below the 20-SMA. On the 120-minute chart, the RSI is still declining, signaling further losses in the 20-pip range could be on the horizon before the AUD/NZD pair rebounds back towards its channel’s regression. 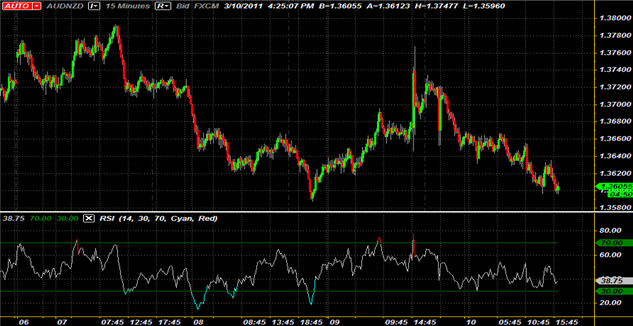 With no data due tomorrow for either country, little event risk is on the docket. The markets have seemed to shrug off the RBNZ rate decision, as evidenced by the 15-minute chart, with the pair trading at levels prior to the rate cut. Little event risk is on the horizon for next week either, so the pair is likely to adhere to its key technical levels for the next few days.