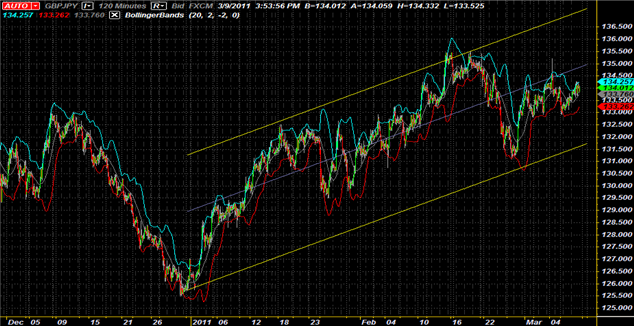 After failing to follow through on a descending triangle formation in the final few months of 2010, the GBP/JPY pair found itself appreciating rapidly in the first few weeks of 2011. GBP/JPY strength has been rooted in three main causes: a shift to risk at the beginning of the year, which pushed investors away from the Yen; poor growth figures for Japan; and a rise in interest rate expectations for the United Kingdom. With a Bank of England rate decision tomorrow, the GBP/JPY pair serves as a strong candidate to trade the Monetary Policy Committee’s commentary: the pair will gain if the BoE is hawkish and sentiment continues to gather among members for a rate hike, or the pair will decline if the Bank cites deteriorating underlying fundamental conditions as a reason to keep rates low. Accordingly, a scalping environment has emerged for traders seeking to event risk trade the Bank of England rate decision as the pair remains entrenched in the middle of an ascending channel that it has carved out since the start of 2011.

The ascending channel has been firmly in place since the first trading day of the year, which brought the GBP/JPY pair back to its highest level since mid-November. The political turmoil in the Middle East coupled with dovish rhetoric by the Bank of England sent the pair south recently, though speculators have pushed the pair higher recently as they ramped up bets of a potential rate hike by the Bank of England sometime in the coming months. The pair is testing the upper envelope of its Bollinger Bands on the 120-minute chart, and its bullish divergence is tailing off on the MACD Histogram. With the pair nestled between its 23.6 Fibo and 38.2 Fibo, there is room for traders to scalp the pair. 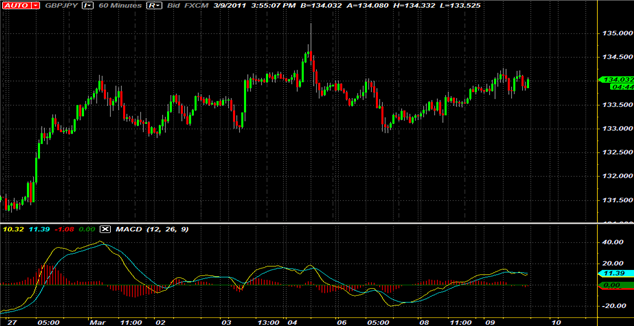 Looking at the 60-minute charts, it appears an appreciation is occurring ahead of the Bank of England rate decision, as well as ahead of Japanese growth figures (though those are due on Friday). A potentially small head and shoulders formation has formed with 134.000 as the neckline, suggesting that the Bank of England rate decision would be the fundamental trigger to send the GBP/JPY pair lower once more. As noted by the MACD Histogram on the 60-minute chart above, the GBP/JPY pair’s bullish momentum has indeed peaked and tailed with; in fact, there is a negative differential indicating a bearish divergence.

Heading into the next few hours, with an ATR of 130 on the daily charts, it appears that there is room to scalp as the pair trades above its 38.2 Fibo on the daily chart, on the August 3 to December 31 move. The pair’s 50-SMA remains below its 200-SMA, an indicator of a long-term bearish bias. The bias to the downside exists across all significant short-term charts, and even on long-term charts; the Slow Stochastic indicator on the daily chart has turned lower and has issued a sell signal. On the 120-minute chart, the Slow Stochastic is turning towards a sell signal, with the %K and %D differential having narrowed to a meager 2.00, with the %K at 78 and %D at 76. Similarly, the RSI is approaching overbought levels on the 60-minute chart; the downside potential is confirmed by an RSI that has recently begun to decline on the 15-minute chart. 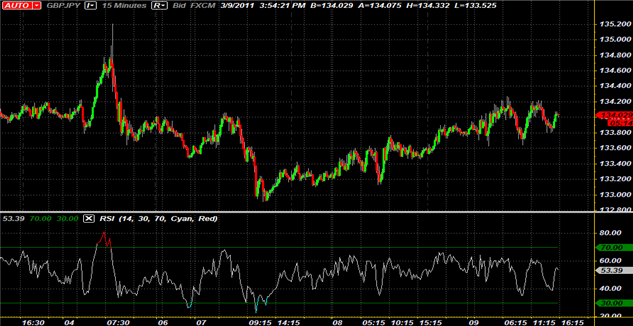 Significant data is expected out of Britain over the next few days with the Bank of England rate decision, expected tomorrow at 12:00 GMT, representing the most significant event risk on the docket. While rates are forecasted to remain on hold, the markets will be looking at the commentary provided by the Monetary Policy Committee. Before then, however, Japanese growth figures are expected in the overnight session; the economy is expected to have turned lower as capital spending decreased in the fourth quarter. Data from the U.K. and Japan thins out for the remainder of Thursday and Friday after said releases, however, with producer prices out of the U.K. representing the only remaining data on the calendar.