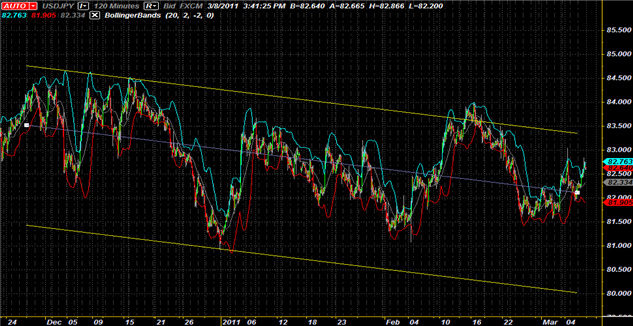 The USD/JPY pair has been declining steadily since 2008, primarily due to the global shift in risk aversion following the financial crisis. However, the more recent decline has been in place for nearly two years to the day – the start of the bull rally in equity markets starting in March 2009; the S&P 500 has a +0.354 correlation to the Yen spot over this time period. After touching just below 81.000 at the start of 2011, the pair has been trading sideways, with a slightly upward bias. As markets continue to acclimate to the political unrest in North Africa and the Middle East, the U.S. Dollar could appreciate against its Japanese counterpart in the near-term as speculators ease off of bets of stronger oil. With little fundamental risk on the docket for the next few days for the U.S. Dollar, and disappointing gross domestic product figures due for Japan, coupled with an ATR that is bouncing off of all-time lows, there appears to be a scalping environment well in place for traders to collect profits as the USD/JPY pair tests the upper range of its long-term descending channel.

The descending channel has been firmly in place since late-November, but the bearish trend has been in place for years. Actions in recent months by the Federal Reserve to inject liquidity into the capital markets have aided the depreciation in recent months. As noted on the 120-minute chart above, when the USD/JPY pair touched the range bottom at the turn of the year, it bounced back sharply. I would even argue that a new sub-channel has been formed within this descending channel, a smaller sideways channel dating back to the third week of December (the sideways channel is biased slightly upward). Considering this, with the USD/JPY pair having another 50-pips to gain before it tests the range tops of these two channels, as well as momentum indicators pointing towards further gains, our bias remains to the upside. Fundamentally, our forecast points to further Yen weakness this week. 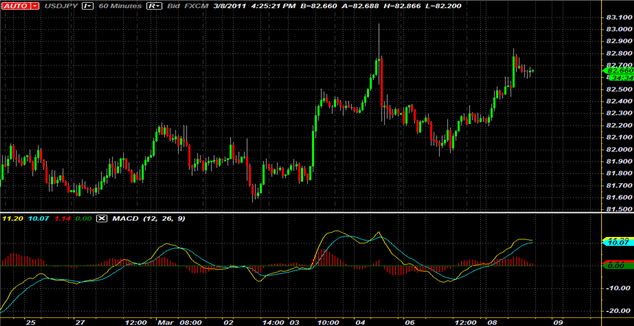 Looking at the 60-minute charts, it appears an appreciation is occurring, though slowly; in fact, since Thursday, the USD/JPY pair has traded in a tight 100-pip range. The appreciation has occurred after a 300-pip depreciation over the last two weeks of February, and since then, the bullish momentum has gathered on the daily chart. With the RSI trending higher at 66, there is some more room for the USD/JPY pair to run before it could potentially see a break lower. It is important to note that the USD/JPY pair is coming off of oversold levels after touching 82.800.

Heading into the next few hours, with an ATR of 59 on the daily charts, it appears that there is room to scalp as the pair trades above its 38.2 Fibo on the daily chart, on the September 16 to November 1 move. The pair has been able to close lower than 81.500, a level that the Bank of Japan has likely deemed unacceptable to fall below. With a double bottom having formed on the first day of February and at the end of the month, long-term technical indicators suggest that the pair will continue climb for the time being: the RSI on the daily chart is rising, while the MACD Histogram has tailed off of its bearish divergence, with the differential a minuscule -1.03. To this end, the Slow Stochastic oscillator on the daily chart is trending higher, with the %K higher than the %D at 39 and 28, respectively. Clearing the congested significant moving averages – particularly the 50-SMA – exposes the 50.0 Fibo at 83.050. 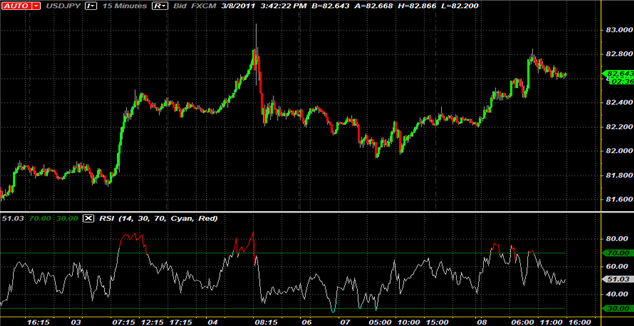 The docket is relatively light in terms of significant economic data for both the U.S. and Japan for the next few days relative to the other major currencies, which means, barring any unforeseen fundamental news, the USD/JPY pair should adhere to its technical levels as it will likely be one of the least volatile pairs for the next twenty-four to forty-eight hours. With Japanese gross domestic product data expected to show a contraction in the 4Q, there exists a scalping opportunity to the upside.