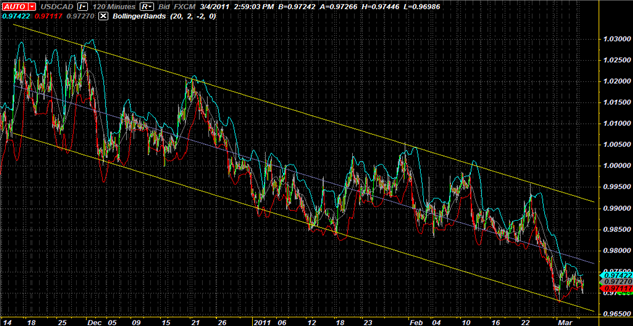 The USD/CAD pair has been moving lower and lower week after week as the global recovery establishes a strong foundation. After failing to break through the psychologically significant 0.9700 level, the pair has consolidated, in line with the recent tail off of the bull rally in equity markets. In fact, there has been a strong correlation between the USD/CAD pair and U.S. equity markets, as the Canadian Dollar spot has a -0.732 correlation with the S&P 500. With investors remaining cautious about investing in risky assets due to the fear that political unrest could spread from North Africa to the Arabian Peninsula, the U.S. Dollar could appreciate against its Canadian counterpart in the near-term. With little fundamental risk on the docket for the first few days of next week, as well as an ATR that is approaching all-time lows, there appears to be a scalping environment forming for traders to collect profits in the USD/CAD pair’s descending channel.

The descending channel has been firmly in place since mid-November, but the bearish trend began in August after the Federal Reserve announced it would inject liquidity into capital markets via quantitative easing. As noted on the 120-minute chart above, when the USD/CAD pair has touched the range bottom of its descending channel, it has rebounded; most recently, this occurred at the beginning of March when it touched the 0.9700 level. Considering the USD/CAD pair has been unable to close below the psychologically significant 0.9700 level, our bias remains to the upside in the very near-term. The MACD Histogram has come off of a bearish divergence, but in fact, is neutral on the 120-minute chart. With a rising RSI of 43, and a Slow Stochastic indicator that suggests a buy signal, the pair could test its 23.6 Fibo retracement on the February 11 to March 1 move. It is important to note that the long-term trend of Canadian Dollar strength is expected to continue, as the shorter-term moving averages remains below their next highest moving average, respectively (the 20-SMA is below the 50-SMA, which is below the 100-SMA, etc). 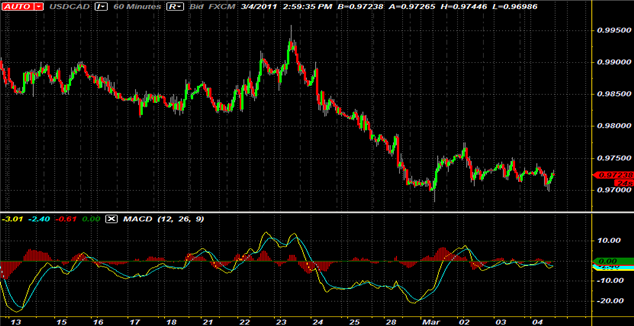 Looking at the 60-minute charts, it appears a consolidation is occurring; in fact, over the past few days, the USD/CAD pair has traded in an extremely tight 50-pip range. The consolidation has occurred after a sharp 250-pip depreciation over the last week of February, but since then, the bearish momentum has slowed. While a 250-pip retracement is unlikely unless there is significant fundamental data over the next few days – which there is not – given a buy signal by the Slow Stochastic oscillator, as well as a rising RSI, which is now at 46, there is room to run for the USD/CAD pair on the 60-minute chart before it continues lower.

Heading into the next few hours, with an ATR of 65 on the daily charts, it appears that there is room to scalp as the pair trades below its 23.6 Fibo on the 120-minute chart. The pair keeps setting fresh yearly lows, so the trend remains to the downside. However, with the pair facing extreme oversold conditions, there is an opportunity to fade depreciation before the USD/CAD pair moves lower. On the 120-minute, 60-minute, and 15-minute charts the RSI is rising; accordingly, the Slow Stochastic oscillators across the 120-minute and 60-minute charts are rising. However, with the Slow Stochastic oscillator issuing a sell signal on the 15-minute chart, there could be a consolidation before the USD/CAD pair moves 20- to 40-pips higher. 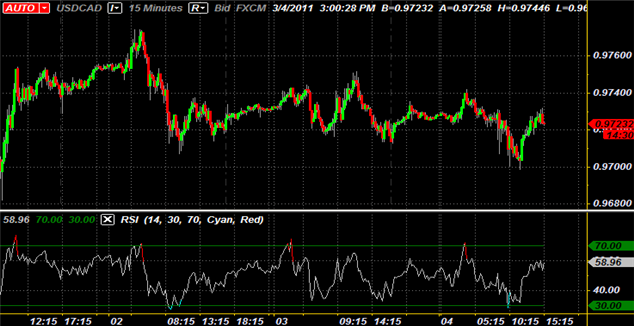 The docket is empty of significant economic data for both the U.S. and Canada for the next few days, which means, barring any unforeseen fundamental news, the USD/CAD pair should adhere to its technical levels. However, on Tuesday, the first bout of data that could affect the pair, with Canadian housing starts due. Volatility is expected to pick up on Thursday, with many significant data releases due for the both the United States and Canada on Thursday and Friday.