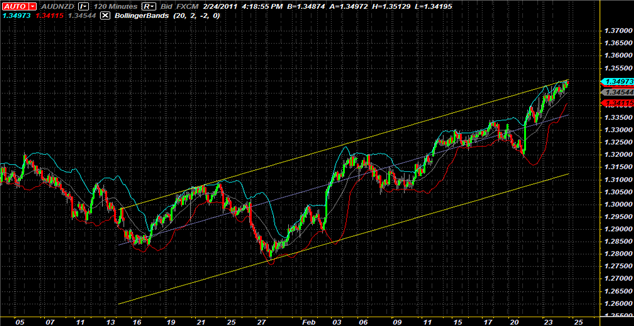 After declining for much of January, the AUD/NZD pair has seen a sharp appreciation in February, recouping all of its losses during the first month of 2011, and then some. The recent trend gains are in line with the long-term ascending channel that has been holding since the start of 2009. More recently, over the past five weeks, an ascending channel has also emerged, with the AUD/NZD pair sitting at its range top, and testing crucial resistance levels. With little event risk on the horizon over the course of the next few days, there is minimal fundamental risk of a breakout to the upside, and accordingly, an opportunity to scalp the AUD/NZD pair has emerged as the pair flirts with key technical levels.

The ascending channel has been in place for the past five to six weeks, as the AUD/NZD pair ahs carved out more than a 600-pip range in the process. The pair is also currently testing its highest level if the year, slightly above 1.3500. The sharp appreciation experienced, particularly this week, has created extreme technical conditions which suggest a correction to the downside before the pair continues north within its channel, if it does not breakout. The RSI is overbought on both the 120-minute and daily charts, while on the 120-minute chart, the differential between the %K and %D has been steadily decreasing, suggesting that downside potential is gathering. 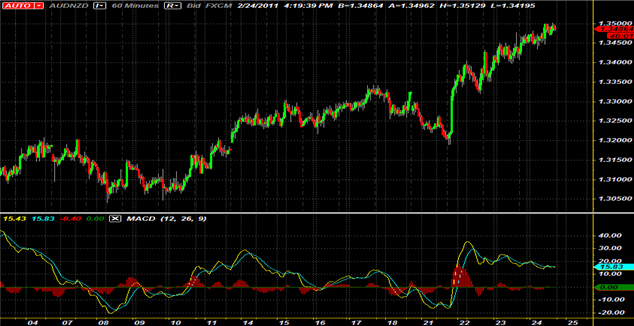 Looking at the 60-minute charts, the AUD/NZD has been in a clearly defined uptrend since the second week of February, though the appreciation experienced earlier this week by the AUD/NZD pair was onset by an earthquake that struck New Zealand, sinking the Kiwi across the board. Nonetheless, the broader trend, for much of the past year, has been to the upside for the AUD/NZD pair. The pair’s bullish divergence on the MACD Histogram has tailed off, suggesting that momentum has shifted to the downside for the next few hours.

Heading into the next few hours, with an ATR of 109 on the daily charts, it appears that there is room to scalp as the pair remains pressed up against its 0.00 Fibo, its highest level since Mid December. Accordingly, a breakout above this represents a break to fresh highs for 2011, though it is too early to rule out a retest of the 23.6 Fibo at 1.3302 on the daily chart. Accordingly, longer-term technical indicators, such as the Slow Stochastic oscillator, has turned to the downside, affirming the possibility of a break lower before continuing higher within the AUD/NZD pair’s ascending channel. 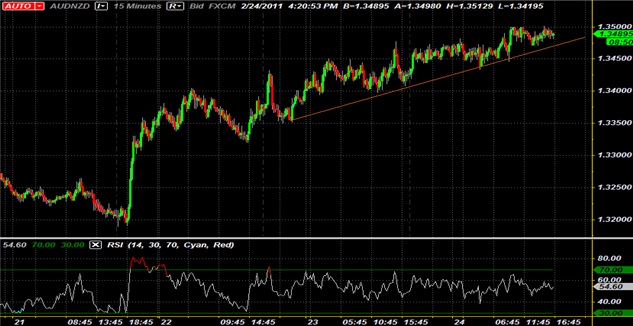 The docket is empty for both Australia and New Zealand tomorrow, eliminating the prospect of a breakout, barring another major fundamental event. However, with New Zealand Trade Balance data due out on Sunday, New Zealand Business Confidence expected Monday, and a Reserve Bank of Australia Rate Decision on Tuesday, significant event risk is on the horizon for the Pacific Rim countries.